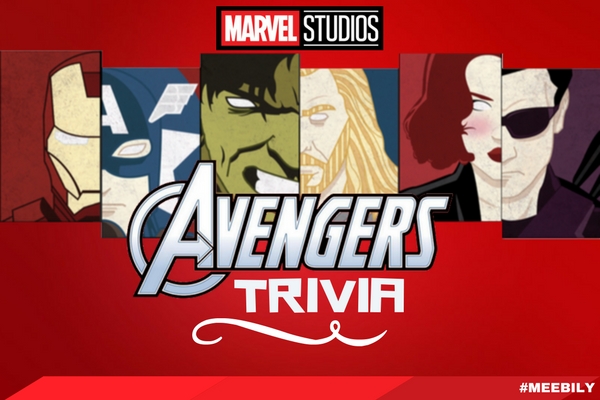 It’s time to forget all your worldly troubles and wander to a science fiction world of superheroes and their notorious enemies with Avengers. With ever-growing popularity and blockbuster hit movies under the belt, Marvel Avengers never disappoints to satisfy our craving for superhero action.

To fight the unparalleled threat to the universe, an extraordinary team is recruited by Nick Fury that comprises of our favorite superheroes: Iron Man, Captain America, the Hulk, Thor, the Black Widow, and Hawkeye.

Together they face the ultimate challenges in battle with unconstrained evil forces that require a super-team effort. Alone they are deemed to be defeated but together they can succeed.

We grew up watching and imitating these superheroes. Now, it’s time to see if we remember all the details of the Avengers movies. Our elicit list Avengers Trivia Questions & Answers will give you and your friends a run for their money.

Use this Avengers Trivia Quiz as a printable worksheet game and prove if you are really the true Avengers fan that you say you are. But first, here are then interesting Avengers Trivia Facts that I bet you didn’t know.

If you love answering questions about Superheros then do check this one out! 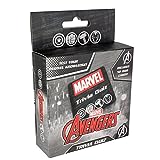 Q. Who does Clint fight with?

Q. Who does Tony say security breach to?

Q. How does Tony react when he sees Steve?

Show Answer
He makes fun of him.

Q. When the military pilot yelled into his radio, ”Target angry! Target angry!” to who was he referring?

Q. Who does Loki say that he’s going to make him/her kill Natasha?

Q. What is the name of Loki’s brother?

Q. Can you name all the superheroes?

Q. Who does Natasha run from when the arrow hits the helicarrier?

Q. Which Avengers team did not possess ”powers” or physical alterations, but were just extremely talented?

Q. Of all the heroes, only one of them was not of Earth. Who was it?

Q. Before the epic fight in the woods, what did Iron Man refer to Thor as?

Show Answer
Archery, he was trained by Olympic archers.

Q. When all of the Avengers are bickering in the lab on the S.H.I.E.L.D helicarrier which Avenger is not present?

Q. While inside Stark Towers who did Hulk say ”Puny god” to while throwing this person around like a rag doll?

Q. When describing the Avengers to Loki, how did Tony describe Captain America?

Show Answer
He described him as a super soldier.

Q. Who was the first member of the Avengers team that Natasha went to retrieve?

Q. When Loki is locked up in the S.H.I.E.L.D. helicarrier, who gets him to reveal that he is planning to get Banner to change into the Hulk and destroy the ship from within?

Q. Which Avenger’s girlfriend makes an appearance in the film that isn’t just a quick picture or a flashback to one of their solo movies?

Q. When Tony Stark is threatening Loki and going through the Avengers roll call what is he doing?

Q. Nick Fury made a bet with Steve Rogers (Captain America) of $10 that he could surprise him. Who won the bet?

Q. What object did Loki possess that the Avengers team was desperate to recover?

Show Answer
The Ark of the Covenant.

Q. By the time the battle in New York City ended, what was the only letter left on the top of Stark Tower?

Show Answer
The letter “A”.

Q. What does this A stand for?

Q. What was Phase Two that Nick Fury had moved to the airship from the compound in the movie’s beginning?

Q. When leaving Stark Towers, what kind of musician did Pepper Potts mention that Phil Coulson was seeing?

Q. What is the name of the blue glowing square that Loki uses as a weapon?

Q. When Iron Man is struck by Thor’s lightning what happens?

Show Answer
It supercharges his armor up to 400%

Q. How did Nick Fury win the bet?

Show Answer
He made a ship turn into a flying aircraft carrier that disappeared.

Q. What did the final scene of the movie (post end credits) show the Avengers team doing?

Q. When the Avengers are in the streets of New York Captain America starts issuing orders. What are his orders to the Hulk?

Q. Can you name the metal clad hero?

Q. What green rage monster does?

Q. Name the location of the Avengers tower

Q. Name the first film in the Marvel Cinematic Universe

Q. Name the weapon which Captain America use

Q. Name the organ of Tom Stark that is damaged

Q. Where is Black Widow from?

Q. To where did the Hulk go at the end of Age of Ultron?

Q. Name the alien race which invaded New York in the Avengers

Q. Name the fictional metal which is found in Wakanda

Q. Name someone who turned Bruce Banner into the Hulk

Q. Where did the collector live?

Q. How did StarLord defeat Ronan?

Show Answer
A dance off

Q. What is the name of Tony suits’ AI called?

Q. From which part of New York does Spiderman belongs to?

Q. Whose logo appeared in the post credits’ scene in Infinity War?

Q. In which location did Natasha find Bruce?

Q. Name something which Loki have that Avengers team want to recover

Q. Name someone who was the first to join the Avengers

Q. Who gave Avengers their name?

Q. What is in the centre of Captain America’s shield?

Q. What is the color of Iron Man’s armor when the Avengers were formed?

Q. Name the creator of the Vision

Q. Name the Avengers who initiated their career as a villain

Q. Name the material from which Captain America’s shield is made from

Q. Name the object which is actually the vessel for the Space Stone

Q. Name the person who gifted Loki his power scepter

Q. Who murdered Frigga in Thor: The Dark World?

Q. During Captain America civil war, who gave a speech in Vienna when the bomb went off?

Q. Name the movie which marks the beginning of Phase 2 of the Marvel Cinematic Universe

Q. Name an Avengers who went to 2014 to get Power Stone

Q. Who sacrificed to get the Soul Stone?

Q. Name an Avenger who went to 2013 to get Reality Stone

Q. Who ended up being worthy of wielding Mjolnir?

Q. Which Avenger came back as its own past version?

Q. Who snapped away stones from Thano’s entire army?

Q. In which year Thanos attacked the Avengers?

Q. What AIM stands for in Killian’s company?

Q. Name the role of Jarvis in Iron Man 3

Q. Who played the character of Thor?

Q. What is the nickname which Iron Man gave to Thor?

Q. Can you mention real name of Thor’s axe?

Q. Name the location of the opening scene of Captain America: The Winter Soldier

Q. Do you know the Wifi password given to Dr. Strange by Karl Mordo?

Q. Who stole the mysterious relic in March 1942?

Q. State the count of Avengers in the infinity war

Q. State the count of Infinity Stones on Earth before arrival of Thanos

Q. Name Infinity Stone that Vision had on his forehead

Q. According to Quin Jet, who is the strongest Avenger?

Q. State the count of members in the Black Order

Q. Name the Avenger who appeared first on the screen

Q. Which country did Vision and Scarlet live in?

Q. Who proposed idea to bring Vision to Wakanda?

Q. To where Gamora brought Thanos to lead him to Soul Stone?

Q. Which movie did Star-Lord refer to while talking to Spiderman?

Q. Which coffee chain was namedropped by Okoye?

Q. Which MCU villain guided Thanos and Gamora to the cliff?

Q. Name the creature who fought with Avengers during Wakanda battle

Q. State the count of survivors that are left on Titan

Q. What was Natasha’s ability to calm Hulk back into Bruce Banner?

Q. Name the creature that was created Ultron

Q. With whom Bruce Banner work with?

Q. How tall is the Hulk?

Q. Name something which Tony Stark have in his chest

Q. What is the nationality of the Black Widow?

Q. Which Avenger warned Iron Man to watch his language?