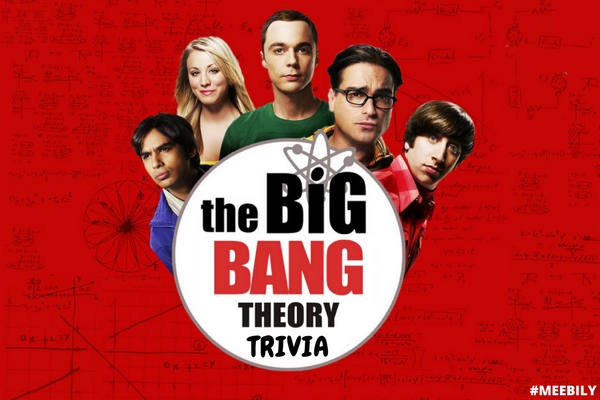 Big Bang Theory, a hilarious combination of science and comedy wrapped in television series seasons in which a Physics genius named Sheldon who knows almost everything about universe funnily fails every time to interact with women.

His crazy friends’ squad has some equally brilliant fellows namely Raj, Howard, Howard’s wife Bernadette, and together they explore complexities of life outside science lab. Want to gauge how much you know about the Big Bang Theory?

Q. Who is the creator of the “Big Bang Theory”?

Q. When did the show premiered on CBS?

Q. When did the eleventh season of the show premiered?

Q. On how many characters is the show primarily centered?

Q. Name the band that wrote the theme song for the show.

Q. Where did Sheldon meets Amy for the first time?

Show Answer
at a coffee shop

Q. What is the color of the flag’s background found on Sheldon and Leonard’s apartment?

Q. How many seasons does the show “ Bing Bang Theory has?

Q. How many episodes does the show have?

Q. In the episode ”The Apology Insufficiency”, why did Sheldon visit Cheesecake Factory?

Show Answer
To drink away his troubles

Q. In which episode did Sheldon and Amy met?

Q. In ”The Rothman Disintegration”, on what did Sheldon and Barry Kripke argued?

Q. At the end of season 2 to what place did Howard, Leonard, Raj and Sheldon go?

Q. Name the contract that Sheldon makes the Leonard to sign in order to live with him.

Q. What specific word does Sheldon often use after a prank or a joke?

Q. In season 5 what name did Penny and Leonard gives to the evaluation of their relationship.

Q. What does Raj use to communicate with his parents?

Q. Where did Leonard want to take Penny to celebrate Valentines Day?

Q. What does Penny gives as a Christmas present to Sheldon?

Q. Why did penny punch Howard?

Show Answer
Because He tries to kiss her

Q. What does Amy asks Sheldon to wash when he tries to help her in neurobiological lab?

Q. What board game did Sheldon develop?

Q. What amount did Howard pay for his Iron Man helmet?

Q. In the second season which character gets his learner’s permit?

Q. What Barry Manilow cover band does Amy wants to see in Vegas?

Q. What does the university require Sheldon to do in order to become a senior professor?

Q. Amy can stick in her mouth how many fava beans?

Q. For what does P.R.K stands?

Q. Name the episode in which Leonard proposes to Penny.

Q. What costume does Penny choose for Halloween party?

Q. In order to eat Thai food one should use what according to Sheldon?

Q. ”I don’t care if no one else gets it, I’m going as the Doppler effect” these are the words of which character?

Q. At what place does Howard and Bernadette got married?

Q. What is the number of apartment that belongs to Amy?

Q. Why did Howard buy a red cowboy hat in the ”Electric Can Opener Fluctuation?

Q. What song was said to be the original theme song of the show?

Show Answer
She blinded me with science

Q. With what name did Sheldon call his grandfather when he was a little kid?

Q. In which season does Wil Wheaton makes a guest appearance?

Q. What amount did the boys pay for Time Machine?

Q. In what episode did Sheldon used the word “Bazinga” for the first time?

Q. In what restaurant does penny works?

Q. Name the singer that Howard and Amy realize they both liked in ”The Scavenger Vortex”.

Q. What is Howard’s education?

Q. In what field did Howard did Masters?

Q. What was the rest of three best friends’ education level?

Q. With who did Penny goes on a date?

Q. When Penny dislocates her shoulder; who was the one to help her?

Q. Penny is from which state?

Q. Who is Raj’s sister name?

Q. Name the Howard’s friend who have fantasies about Bernadette and often writes poems for her?

Q. To what city of India does Raj belongs?

Q. Who is the owner of Comic Book Store?

Q. What is Sheldon’s profession?

Q. What is Leonard’s profession?

Q. What is Howard’s profession?

Q. What job does Raj has?

Q. What is Raj’s surname?

Q. Who is known as the straight man of series?

Q. What is Howard’s mother name?

Q. What does Raj hates?

Q. To what is Amy allergic?

Q. Whose middle name is Maryann?

Q. Name the character that has twin sisters.

Q. Who is the shyest character of the play?

Q. What is the real life name of Amy Farah?

Q. Sheldon is afraid of what animal?

Q. Name the surgeon Leonard dates in the second season.

Q. To what guest does Raj talk to when the boys leave him at Cheesecake Factory?

Q. What is the real life name of Raj?

Q. What is Leonard’s mother’s name?

Q. What role does the actress Sara Gilbert has in the show?

Q. What role does actress Kayley Cuoco portray in the show?

Q. ”I swear to God, Sheldon, one day I’m going to get the hang of talking to you” are the words of which character in the show?

Q. Amy dressed up as what when the girls visit the Disneyland?

Q. What is the birthplace of Sheldon Cooper?

Q. At what age did Sheldon won Stephenson award?

Q. Name the actor who plays the role of Bernadette’s father Mike Rostenkowski.