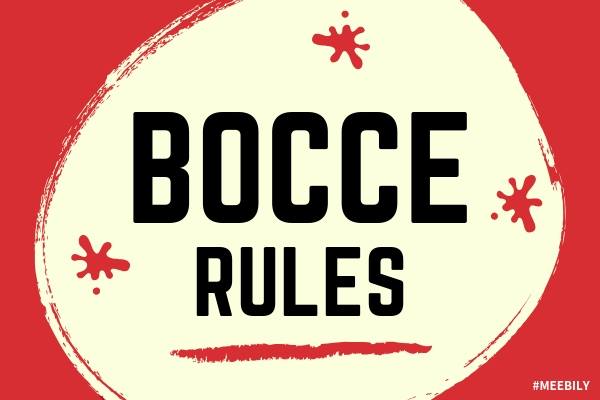 Conventionally known as an Italian lawn game, Bocce is all about how good you are in targeting. In easy words, Bocce is about throwing balls to the target and this is the oldest game known to mankind. The history of Bocce goes back to Egyptian times when they played the game with polished rocks. The trend of the game was then transferred to Greeks and Romans but the whole process ended up making variations in Bocce rules. Let’s take a look into basic Bocce rules all of which may not *comply* with the official Olympics Bocce rules.

Bocce is played with a set of Bocce balls containing both the target ball and the balls of the players. The standard set of Bocce balls consists of 8 balls. 4 balls are colored alike and other four alike. Usually, the colors are green and red. Another ball in the Bocce set is comparatively a smaller ball called pallino or jack. Sometimes, the ball used for playing the game is selected depending upon the strength and proficiency of the players. Small Bocce balls are usually used by beginners and kids while the experts prefer to play with the larger Bocce balls.

Bocce court is usually an open field of around 60 feet long. However, the rectangular court of bocce is recommended to be 13 meters wide and 90 meters long. As per the regulations, the Bocce court has a raised barrier of about 20 cm, around the rectangular edge. The court must have the foul line beyond which players cannot step out. There is a demarcation for pallino as well so that it can pass the demarcation when thrown in the beginning. This zone of the jack is 5 meters approximately.

The Objective of the Bocce Game

Bocce is a game with a simple objective. Pallino is thrown first and then the players throw their ball as close to the pallino as possible. You will get one point for every ball that is closer to the pallino as compared to the opponent.

The ball can touch the pallino when thrown. This has two advantages. The first being the pallino will be readjusted and might help the players to get their balls closer to it. The other one being, the higher points that player score when their ball is touching the pallino at the end of the frame.  When the ball touches the pallino, it is called as ‘kiss’ or ‘bocce’.

The player starting the round throws both the balls before their team member throws their first ball. During this course, players can walk to the other end of the court and *devise* a strategy with their partner. Players farthest from the pallino continue to throw balls on their turn untill their ball is closer to the pallino or they run short of the balls.

If the winning team fails to throw the pallino two times, then the other team gets the chance to throw it. There are different ways to throw the bocce balls. Most of the people choose to throw the ball underhanded with their hands cupping the bottom side of the ball. But, some people cup the ball from the top and lob the ball higher into the air while throwing. The other team now throws their remaining balls. All 8 balls of Bocce set should be clustered near the pallino at the end of the frame.

Once the points of both teams are recorded, the teams then switch their position to play the next frame. Some Bocce rules state that the balls shall be thrown underhanded while the players have the liberty of bouncing, tossing and rolling it.

Players are not allowed to cross the foul line while throwing the ball and pallino must land within the prescribed zone or else the other team will have this opportunity of throwing the pallino. In general, a foul line is used to land the balls down the court with the intention of getting it closer to the pallino or hitting the opponent’s ball away. If the player steps over the foul line during or before they throw the pallino, they will receive one warning. If they incur the foul next time, the opponents will receive a rewarding point and that frame will end.

Any ball going outside the court is considered dead and is not allowed to be used till end of the frame. Scores are awarded to the deserving team at the end of each frame. Only one team earns a point in each frame. When both teams have their balls at the same distance from the pallino then no team receive any of the points and pallino is returned to the team who delivered it. All measurements of the distance shall be made from the center of the pallino to the edge of the Bocce ball.

For scoring, measure the distance between each ball and pallino. The team whose ball is closest to the pallino earns the score. This team will score 1 or 2 points depending upon the position of the Bocce balls, and the other team won’t score any point. For every ball that is closer to the jack than your opponent, scores you one point. While the ball that touches the pallino gets you two points. If both teams have their balls at equal distance from the pallino, no point would be awarded to any team. The next frame would be played then.

The player or the team scoring 12 points faster, wins the game.