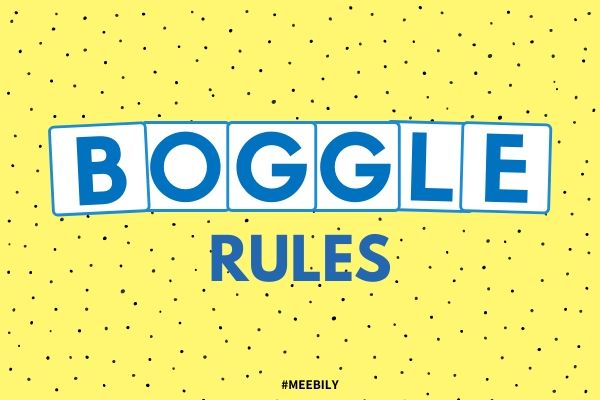 Boggle is a classic word finding game. The game was invented by Allan Turoff and designed by Bill Cooke. Boggle rules are very easy to learn but mastering this game requires a lot of practice. The game is played with the dice having letters on it. Players make as many as words they could from the random mixing of the given letters. During the word-finding period, quick thinking and creativity is the key to success.

If you want to play a competitive game, you need to be extra creative for the word-finding process. You can either play this game with your family or friends because Boggle rules are simple to understand. Once you start this game, you can continue for hours. You can take boggle with you on road trips or anywhere else. Go try your luck in Boggle. You simply need to learn the easy Boggle rules to get some points.

Check Out: Backgammon Rules: How to Play Backgammon

Boggle rules are very simple to learn. According to the Boggle rules, the game involves a cube grid, 16 letter cubes, a pencil and a piece of paper, and a timer. There is no age restriction for the game. The dice are shaken to get 16 random letters. Players can find as many as words they can. 3 minutes’ time is set on the timer which beeps when the time is over. A player needs to make the maximum number of words from the given 4×4 letter grid. A player wins the game when he has the highest score at the end of three minutes’ time or when he is the first one to reach the already decided point limit in a tournament boggle game.

As per boggle rules, the boggle grid is placed on the table and all the players sit around it to see the grid properly. Each paper is handed over a pencil and a piece of paper to write on the words. Cubes with the letters are dropped into the dome, yellow cube grid is placed over the dome. Cubes are well shaken to get each cube in the right place. One of the players removes the dome, another player initiates the 3- minute timer. As the timer begins, players try to make words using three letters or more.

The one finding the word writes it on the given piece of paper. Words are formed with adjacent letters. To form a word, a sequence of letters is very important. Letters may be aligned diagonally, vertically, horizontally, to right, left or up and down, to form a word. For a single word, no letter cube can be used more than once.

Here are some Boggle rules that might help you to play a competitive game:

Players form words from the letters that appear on the adjoining cubes. Adjacent cubes can appear diagonally, horizontally, or vertically. When a player selects a cube face, as per the Boggle rules, no tiles can be skipped to move to another, to make a word. This rule needs to be kept in mind that no cube is allowed to be used more than once in the construction of the same word. Words that are present in the English dictionary are only allowed in the game. Players are not allowed to make words that are slang or that are abbreviations of the words. Proper nouns are not allowed. Words with less than 3 letters are not allowed at all. 3 letters are maximum to form a legal word. New words can be formed by adding plurals, prefix, or suffix to an already formed word.

According to the Boggle rules, there are few instructions that you need to remember. Players can only use valid words. If a player claims an invalid word, points will be deducted from his score. If a player only writes an invalid word but does not show it to claim points, in this case, no points will be deducted from his score. If a word appears in the lists of more than one player, the word will be canceled and nobody will get the point. The letters ‘q’ and ‘u’ are always written on one face only, use of this face counts as two letters.

Players who make words with 3 and 4 letters are given 1 point. Players who make 5 letter words are awarded 2 points each. 6 letter word will earn them 3 points each. 7 letter word will earn them 5 points. 8 letter words will add 11 points to the total score of a player. If a player gets a grid with red color around a letter, he will get double scores for the words he will make using this red letter. Any word present in the English dictionary is allowed except for proper nouns. Players can also make words from within a word e.g. crate, rate, rat, ate. Words that are spelled wrong will be canceled out and players will not get their points.

When the time is over, the timer light will no more be red and it will make a beep sound. On hearing the beep, all the players stop writing. Now every player will read out his list of words one by one. It is noteworthy that if a word is present in the list of two players, it will be crossed off from both lists and no one will get its point. Words containing bonus letters will earn double points to the players. According to the Boggle rules, a player is declared to be the winner, if he reaches the tournament score i.e. 50 points, 100 points, or points that were decided before the initiation of the game.

Boggle is not only a good time pass activity but it also provides an opportunity for the players to improve their vocabulary. There is no age limit for this game and no restrictions on the total number of players. So, refresh your mind, gather your squad, learn some Boggle rules, and have a blast playing Boggle. You can thank us later for this guide.