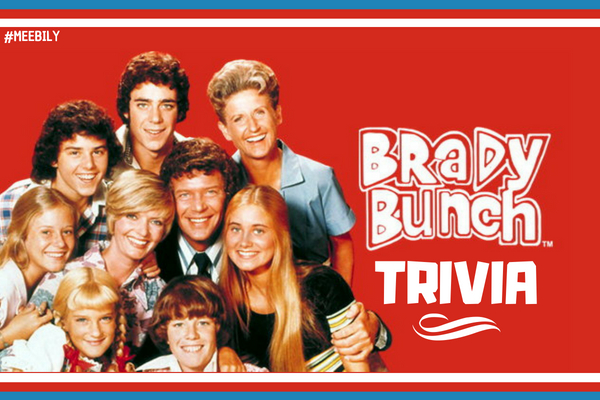 Are you a true fan of Brady Bunch? Well, you might have probably heard of this famous sitcom already. It was created by Sherwood Schwartz which aired from September 26, 1969, till March 8, 1974, on ABC. The television series revolves around a blended family with six children. Being one of the old-style family sitcoms, it aired for only five seasons at the beginning after which it went into syndication.

The series was popular syndication, especially among children and teenagers. The success in syndication led to the reunion of the series and soon there were several sequels of the show presented including The Brady girls get married, The Brady Brides, The very Brady Christmas and much more. Obviously, since the series never got a critical review, therefore, it was venerated by people all across the globe.

Q. What classic film actor is Peter attempting to emulate when he says, ”Pork chops and applesauce”?

Q. What is Carol’s maiden name?

Q. What is the name of Brady’s next door neighbor?

Q. What were the names the family members who wore glasses?

Q. Whose hair (besides the rabbits’) does Bobby’s hair tonic turn orange?

Q. What was the name of Alice’s no-nonsense replacement?

Q. Which Brady was always having dreams?

Q. What are the names of Alice’s sisters?

Q. By the last episode which Bradys could drive?

Q. What is Alice’s last name?

Q. Who won a stereo?

Q. What is the name of Brady’s next door neighbor?

Q. What is the name of Alice’s boyfriend?

Q. Who was the oldest among the Brady’s?

Q. Who was Bobby Brady’s hero?

Q. Jim Backus (Thurston Howell III from Gilligan’s Island) guest starred as two different characters. In one episode, he played Mike’s boss, and in another, he played?

Q. Before she was crazy about Davy Jones, Marcia had the hots for what other Brady Bunch guest star?

Q. Who played Sam the Butcher in the original series?

Q. Who performed ”Together (Wherever We Go)” at Westdale’s Family Night Frolics?

Q. Jan re-checks her essay contest score and discovers she didn’t REALLY win! Who did?

Q. The Bradys went to what tropical location?

Q. Florence Henderson appeared after how many episodes of the show?

Q. What did mascot from a rival school Greg once keep?

Q. What state did the Brady family live in?

Q. What did Mike Brady do for a living?

Q. The Bradys put on a play of what Disney classic?

Q. How many patio doors were there and where were they?

Q. The Bradys are ‘discovered’ in a supermarket parking lot by a television commercial director who wants to use them in an ad for what product?

Q. Who makes the washing machine overflow by using too much detergent?

Q. What does Jan ride her bicycle into and ruin because she’s not wearing her glasses?

Q. Peter turns into a detective to solve the Case of the Missing?

Q. What color was the refrigerator on the show?

Q. How many rooms were there in the house?

Show Answer
11 (including the attic).

Q. Which song did the Brady kids not perform on the show?

Q. Is Jan worried she’s going to grow up to be ugly like her?

Q. Who plays the woman who sells Jan her fabulous wig?

Q. How many Brady’s live in the house?

Q. How many episodes did Cousin Oliver appear in?