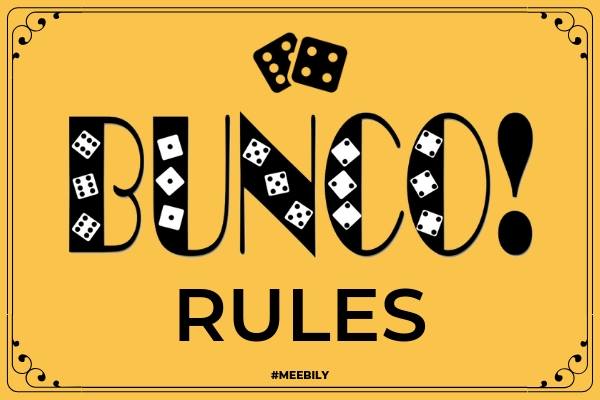 Bunco is an interesting parlor game that dates back to the early 1990s. This game is originally from England. In the 1920s, it was imported to America. In America, it gained popularity as a gambling activity. Later in the 1980s, Bunco gained popularity as a family game. Now it is played for fun, money or prizes. Modern-day Bunco generally involves twelve or more than twelve players.

They are divided into groups of four. Die is rolled and everyone involved tries to score points. Points are earned when a person rolls the dice and all three numbers match the number of the round. The game is very simple, you only need to follow Bunco rules to win the game fairly. If you have not played Bunco in your entire life, you are seriously missing in a very entertaining game. Here is a complete guide of Bunco rules for you to follow.

To know more about Dice Games, do check out: Farkle Dice Game Rules: How to Play Farkle

Follow these simple Bunco rules, gather your 11 friends or family members and you are ready to play this fun game. It is a great time pass for people of all age groups.

As mentioned above Bunco is the game of 12 players. Before initiating the game, you should have a proper platform and you should have all the things beside you that are needed to play the game. The first step is to arrange for 12 players who will play the game. They can be your friends or family members. Divide the players into 3 groups each having 4 players. Arrange for three tables for all three groups and dice for each table. Once you are done with the arrangements, get a Bunco scoring sheet for each player.

Every table should have a Bunco table tally which means you should have a total of 3 Bunco table tally. Give a pencil to every player for writing. Don’t forget to keep a bell on the head table. Head table is also known as the ‘high table’ or table ‘number 1’. You can also have table direction signs to point out which table is for the winners and which table is for the losers of each round or you can simply label the tables as ‘number 1’, ‘number 2’ and ‘number 3’ so that players can easily switch their seats between each round. Bunco game is not less than a party so don’t forget to stuff the rooms with drinks, food, and decorations.

When you have all these Bunco components, you can begin your game as per the Bunco rules. Four players sit on each table. Players sitting opposite to one another on the same table are considered as partners for the first round. One player at each table is designated as the scorekeeper who is assigned the task of scorekeeping by the use of table tally. He keeps the record of the score of each team.

Bunco, a social game is usually played with twelve players. Twelve players are divided into three tables and each table has four players. It is not necessary to always have twelve players. This number can be less or more. If the number of players is not divisible by four then there are other Bunco rules that need to be followed. In this case, ghost players are also involved in the game. A Bunco game is played in two or four sets and set has six rounds. A player sitting at the head table rings the bell as an indication for the initiation of the round and he again rings that bell, at the end of each round.

When the game begins, players at each table are given the turns to roll the three dice, in an attempt to earn points. All the tables played simultaneously. In every round, players earn points when the number of the round and number of their roll is the same. For example, during round 3, rolling three 3 earns them a point. This is how a player is awarded a point in each round. A player is given turns to roll until he scores no points. The scorekeeper keeps the record of the score every player has earned onto the table tally.

This score is recorded as the temporary team score. Then the player sitting on the left gets the dice. The round is terminated when the head table gets a sore of 21. As per Bunco rules, the head table rings the bell to end the round. At the end of every round, the players are allowed to change their table or their partners. Usually, at the end of the game, there are more than one winners who get prizes on their success.

Bunco rules are not very difficult to follow. For fun and fair game, every player should be familiar with these rules. To earn the points, players need to roll the dice in such a way that its number matches the number of the round. For each matching number, they get 1 point. For example, rolling 2 two’s in round 2 will earn a point to the player.

Remember! According to the Bunco rules, number on the dice is not indicative of points nor are the numbers on the dice added. Only, matching number of the roll and round number earns points. If all the rolls show the same number, the player will earn more points. If all the three dice are similar to the number of the round being played, this is called as Bunco and the player earns 21 points. Mini Bunco is when the player rolls three of the numbers that don’t match the round number and the player gets 5 points.

According to the Bunco rules, at the end of all the rounds, each player sums up the total number of his loses and wins on his score sheet. Team with more numbers of wins is the winner of the game. If there is a tie between the two teams, there is a roll-off where both the teams participate. Every player rolls the dice. The scorekeeper is the first one to roll and keeps on rolling until he scores no point. At the end of the round, the team with the highest score is announced as the winner. The winners are given prizes.

In Love with Board Games? Read more: Fictionary Rules: How to Play Fictionary Game