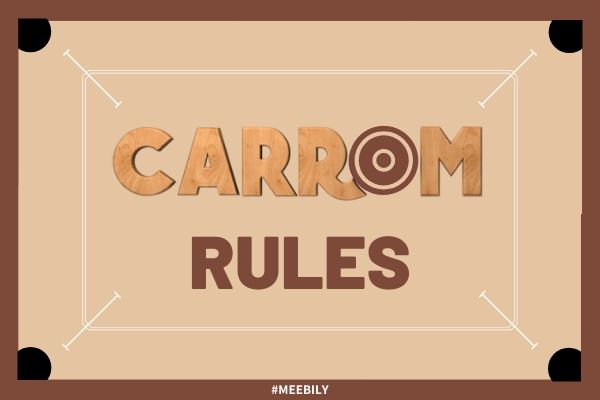 If there’s a game that people relate to Billiard then it is ought to be Carrom or Karom. Hence, it is also known as Finger Billiards. Unlike Billiard, Carrom is played with using fingers and a striker. The game can be played either two players or four players, according to the Carrom rules. To gain mastery over the game, it is important to know the international carom board rules and regulations.

Carrom has long been played in South Asia and India. It has been a century only that other parts of the world have also developed a liking for carrom.  It has gained popularity because of the casual carom board rules that make it easy to learn for beginners.

Equipment and Layout of Carrom Board

The game is played on a carrom board which is the flat square wooden surface of approximately 72 cm square. Each corner has a hole and underneath these holes is a white net attached to catch the carrom pieces that go into the holes. Two lines are drawn on the board, diagonally. These are called foul lines, and no one shall cross these lines while striking. The center of the board consists of two centric circles. The smaller circle is of the size of carrom men (piece) and is the hub of the queen (red-colored carrom piece).

The main circle of about 6 inches in diameter. It is the place where carrom pieces are arranged at the beginning of the game. Two straight lines run parallel to edge of the board, outside the larger circle. These lines are 3.8cm apart from each other and the area between these lines is separated by two red circles. Nine black, nine white pieces, and a red-colored piece (queen) that are stroke with a striker which is larger than other pieces. The wooden, ivory, and a bone striker can be used for the carrom. To make the pieces slide smoothly on the board, various lubricants such as chalk dust, boric acid, or potato starch can be used.

Conventionally speaking, carrom is played with four players or two sittings opposite to each other. It usually depends on the players to decide who goes first. This can be done by concealing a carrom piece in a fist and the player guessing the right fist goes first in striking. The game begins with the queen placed in the center. Six carrom pieces are placed in the circle, directly touching the queen. The rest of the twelve carrom pieces are placed around these six pieces in such a way that they touch the inner circle. Both of the circles shall have the pieces in alternating colors. The pieces are arranged so that the queen, a white piece of the inner and outer circle is facing towards the player who would go first.

The turns are rotated clockwise. A single turn consists of one or more strikes (can be decided before the game starts).

Any player who first pockets the all pieces of chosen color first wins the game, provided that the queen is covered by one of the players as prescribed by the carrom board rules.

Overview of Carrom Board Rules

For each strike, the striker shall be positioned within the baseline or one of the two red circles on either side of the board. However, the striker shall not cross the moon (the larger circle). The striker is flicked with one or two fingers, vertically.

Flicking the striker backward or horizontal is not allowed. Any piece that is present on the front baseline or behind shall not be stroke until the striker has crossed the frontline. Care should be taken while striking and the player with striker shall not cross the foul lines with arms or hands. For the first turn, players are allowed to break the central circle of carrom pieces in three attempts, irrespective of which piece is hit.

If the queen goes into the holes (pocket) then the players are required to cover the queen (i.e. add another piece of their color onto the hole). In case, the queen is not covered, it is returned to the game and placed in the center.

If the players’ pocket none of the pieces are committed any foul the turn is rotated to the next player. Pieces that are returned can be placed on top of each other if more they are more than one in number. If the pieces come to a position where they overlap each other than they left untouched until hit by the striker.

However, if the striker comes to the same e position then it needs to be moved without disturbing the placement of the carrom piece.

Following conditions is an indication of the foul:

Players committing foul have to incur the penalty. Usually, the pocketed piece of the player committing the foul is returned to the main circle on the board. If there is no piece pocketed b the player when foul is committed, then the penalty is owed until the player pockets the carrom piece.

Scoring Rules of Carrom Board

When the game ends, the winner scores 1 point for each of the opponent’s pieces left on the board. If the winner has less than 24 points and also covers the queen than the winner is awarded 5 bonus points but if the winner has 24 or more points, then they are not awarded any bonus points. For one game, the maximum score is therefore 14 points. The game is however played for 29 points and shall be continued to three games at least.

The player with the 29 points wins the carrom tournament. A single game is won when the players succeed in pocketing all of their carrom pieces.