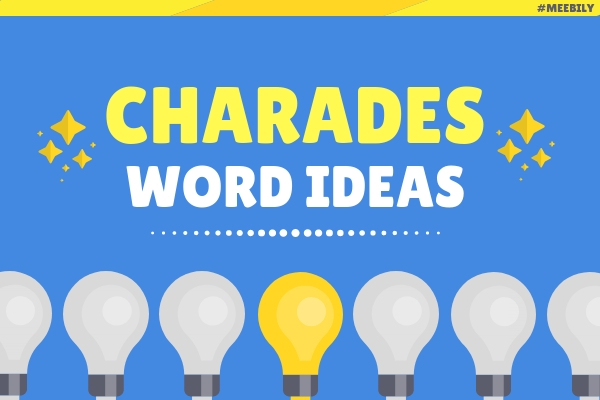 Charades is a game that most of us grew up playing in school when a teacher would take leave or when we went over to our friends’ birthday parties. It’s a game filled with nostalgia and fun. And we believe it’s time for it to make a comeback into your and our lives. Charades is a game for all ages and genders, it provides a great past time and can even lead to unforgettable memories and inside jokes! Charades was a popular game in France in the 18th century in which they used literary ways to describe riddles. They would describe each word through poetry to be able to come to an answer. In the 19th century, they started acting out the riddles and so today’s charade was born. Soon this game spread all over the world and into our lives.

Some argue that Charade is one of the most popular games that can put your friends’ phones away for a night. Consisting of interesting and playful charades words, one can find hundreds of charade word ideas that can surely keep your game night rolling till the sun comes up.

Whether you have seen this game on that very popular Tonight Show starring Jimmy Fallon on TV or it has been your family’s favorite thing to do for Halloween parties, this word guessing game never fails to disappoint. Charades is the perfect way to kill time and have a good time with your friends at the same time.

It can also be played to check out your friends’ dramatic abilities and if they will be able to use the right gestures and notions to make sure that their team is able to reach the winner’s stand.

How to Play Charades Game

Charades is a very easy game to play and enjoy. Just like most games, there are three stages of playing charades. Gathering the equipment needed to play it, setting up the game so it’s ready to be played and deciding on or making yourself familiar with the rules of playing it. Once all of these are covered, you can begin the game.

You only need a few things to play the game of charades. These are listed below:

How to Setup a Charades Game

To set up the game, follow the given steps:

Rules to Play the Charades Game

Charades is fairly easy to play the game as it requires minimal equipment and can be played with as little as two people. The following are the few rules you have to follow while playing charades.

Rules for choosing what to write on the slips:

Rules for playing the game:

Although it’s fun to play plain and simple charades, adding some twists to it by using these variations can make the game even more interesting and fun.

You can combine the classic telephone or Chinese whisper game with charades. Divide up into more than 2 teams, or play individually. All the players if you’re playing individually or one player from each team should stand facing the wall.

The first player or team member should pick out a slip from the basket and act out the word to only the player standing next to him/her. The second player should then act out his/her interpretation of what the first one acted out. And so on. The last player should announce what he thinks was written on the slip and then you can compare how much the word changed by looking at the chosen slip!

This is the classic way of playing charades. By just using your hands and not speaking at all, you are supposed to act out whatever word or phrase you’re given. As quickly as you can.

If you’re at a couple’s exclusive party or just back from a double date with your friends, you can play charades by dividing into couples instead of teams of random people. Each couple should follow the given rules and try to get as many points as possible to beat the other couples!

In this game, the odds are reversed. One person guesses the word while the rest of the team members act it out. The chosen player picks up a chit and holds it above his head for everyone but him to see. The rest of the time has a given amount of time to act out the word or phrase given on the note while he/she tries to guess.

Pressman Dance Charades Game: Can Be Played with...
Check Price

To start off the game you can use these easy words so even the people who’ve never played before can get a hang of it:

This generator is easy to use and can be used online. You just have to go on their website and click on one of the options available to generate a word quickly and effectively. It only gives you one word at a time, however, instead of a list of words.

This generator can be used for multiple games including charades, such as Pictionary and even to generate questions to ask when meeting someone new. To use this generator you have to pick charades from the left tab and the level of difficulty from the right tab and you’re provided with the perfect word! You can even search for movies or names of celebrities to use as challenges.

This generator not only gives you single words but also names of famous people, movie titles and book titles, etc. it is useful to use to search for ideas as well as words. To use this generator, you just have to open the website! An idea will be displayed before you as soon as you open it. You don’t even have to search unless you’re looking for something specific. You can also include multiple categories at the same time while searching.

To really set the stakes high, you can use the following words in your game:

Heads Up! Party Board Game (Edition May Vary)
Check Price

How to Act & Win Charades Game

Make the shape of the letters or vowels with your hands:

Clues to Give Instructions

This a game that is perfect for sleepovers or birthday parties for kids. Use these examples to kick start the game for your children and their friends.

This application is light on your storage yet works perfectly well and fast to give you the ultimate charades experience. It uses the concept of reverse charades.

Although this app is a little hefty, it is the most famous app used for playing charades. It even featured on The Ellen Show! This game allows you to choose from a multitude of categories and also uses the idea of reverse charades. There is also a recording option so you can record your friends doing silly things!

Much like heads up, you use this app by picking a category and then letting your friends act out something for you to guess. If you guess right you flip the phone forwards to record a point and backward if you don’t guess right. This is also a great app to use, despite it not being as known.

A game of charades is, even more, entertaining if played with friends as all levels and types of words and phrases can be included in it, like the following: