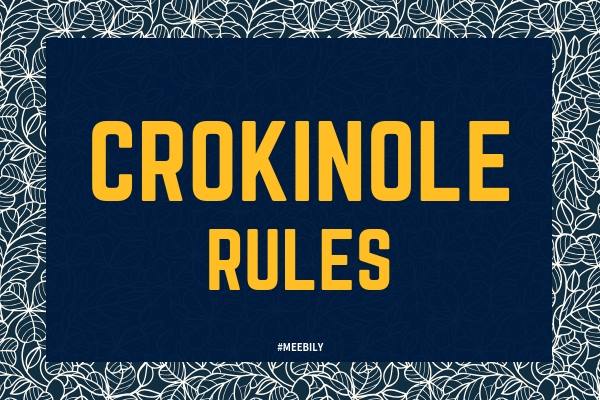 There are many interesting board games that we play to kill our time. Crokinole is one of them. Crokinole is very much similar to carom, marbles, shove ha’penny and pitchnut. Crokinole is a popular game in America and Canada for 100 years now. Every year, a small town named Tavistock in Canada, conducts Crokinole Championship tournament, in June. It is played on a board that is made of a wood is always circular.

All the players need to follow Crokinole rules to play a fair game. It’s a simple game to play and everyone can understand Crokinole rules in minutes but one needs time to develop a strategy and become the master of the game. Players having an innate understanding of physics can master this game.

You need to have a board and discs to play this game. According to the Crikinole rules, the game cannot be played without discs. Dimensions of the board vary depending on the playing surface. The diameter of the board is usually 26 inches. The arrangement involves 3 rings worth 5, 10 and 15 points. Center of the board has a 20 point hole. 15 point ring is the inner most ring and it is guarded by 8 small posts or bumpers. The outer most ring has four quadrants.

The outer boundary of the playing board is a bit raised prevent shots from flying out of the board. There is a gutter between the outer edge and playing surface for the collection of discarded pieces. The Crokinole playing boards are usually round or octagonal in shape.

Players need to have discs to play this game. The diameter of the discs is slightly smaller than the central hole of the board. They are typically checker sized. Discs are designed in such a way to reduce sliding friction.

The game is also played with ring-like pieces. A lubricating powder is used on the board to make sure that the pieces slide smoothly on the board. According to Crokinole rules, a high-quality powder must be used to keep the surface dry and smooth. The powder is spread by the container on the playing surface. Usually, boric acid is used for this purpose.

To begin the game, one player gets two discs of different colors in his hands. He then shakes them and is left with one disc in each hand. The player then holds his fists in close to him. A member of the enemy team choses a hand.

No matter which color disc is chosen, the game starts. He continues the game in the clockwise direction. Player next to him gets the chance to play next. A player will shoot the disk by keeping their disc on the shooting line of their shooting quadrant. When a player aims for the shoot, Crokinole rules state that at least 50% (or more than that) of his disc should stay in the shooting area designated to him.

As per the Crokinole rules, there are two or four players in a game. Partners sit across the board. Players are given the turn one by one. The shooting of disc is done by flicking with the finger. Sometimes, small cue sticks are used for flicking. During the shot, the player should make direct or indirect contact with the enemy discs. If the shot is unsuccessful, the disc is rendered foul and removed from the playing board.

Total game time is usually 15-30 minutes. According to the Crokinole rules, a player has to shoot for the center of the board if no enemy disc is present. The shot disc must end completely inside the 15 point ring line or should touch the line depending upon the rules.

This is known as the no hiding rule because it prevents players from placing their shot in areas where the enemies must cross completely and should avoid fouling.

During the shot, If the disc falls into the central 20-inch hole (which is also known as the Toad), the disc is removed out of the game and is counted as twenty points for the player who has played the shot at the end of the round. The shot is assumed to be valid.

According to the Crokinole, rules player gets the score when all 12 pieces are played by each player. After each round, only one payer or the team gets the point.

The game continues until a fixed winning score is reached. The scoring of the game occurs at the end of the Crokinole round. Each player is asked to count their discs. According to the Crokinole rules:

Keep in mind, if the disc is on the line, it will be taken as the lower scoring ring.

According to the Crokinole rules, the game ends when a player reaches 100 points. Points are scored when the players flick their discs by holding their middle or index finger against the thumb. Disc is flicked near to the hole present at the center.

There is a twist in the game which makes Crokinole an interesting game and keeps the players hooked till the end.

For winning the game, players must try to knock the disc of their opponent away from their disc or into the ditch to knock them out. In simple words, you need to knock your opponent’s discs while always keeping your disc in winning position.

If you cannot touch your opponent’s disc, then your disc gets removed from the playing board.