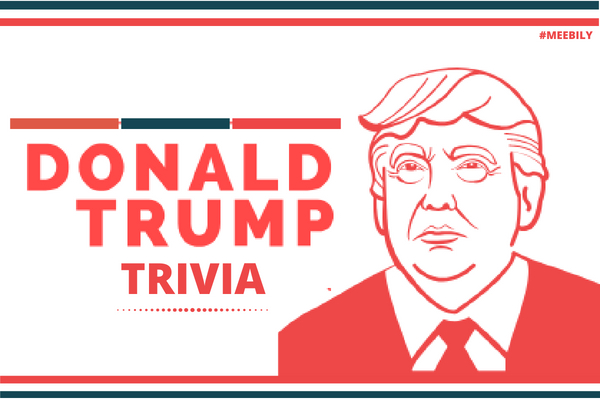 Whether you are a Donald Trump fan or a hatred, you can testify your knowledge on the Donald Trump trivia questions & answers quiz.

Everyone is familiar with the name, Donald John. Trump!!! Well, how couldn’t somebody know? Businessman, author, television personality, and then the Republican Party nominee for the President of United States, Trump has managed to amaze and startle people all across the world. He was elected (back in November 2016) as the current and 45th President of the United States of America. Before being elected as a president he was a businessman and a charming TV personality. Believe it or not, Trump actually received a degree in Economics from Wharton School of the University of Pennsylvania too.

Trump began his career by renaming his family’s real estate business and then expanding it to Manhattan. His company built and renovated several buildings, casinos, skyscrapers, hotels, and golf courses which eventually led his company to be quite popular all across America.

Besides, he also created his own show “The Apprentice” which aired from 2003 to 2015. According to the estimates by Forbe, Trump is the 776th richest person with a net worth of 31 Billion U.S dollars. Moreover, one of the biggest facts which most of the people aren’t familiar with is that Trump married three times, Melania being his current wife. Shocking, right?

If you are interested in knowing more about Trump than this Donald Trump Quiz game is the perfect platform for you. We have designed an amazing Donald Trump questions & answers quiz which will help you dig a little deeper into Donald Trump. After all, he is not just the President of the United States of America. There is a lot more which you still need to find out. Have fun quizzing!!!

Q. In what year was Donald Trump born?

Q. How many Children does Donald Trump have?

Q. How many grandchildren does Trump have?

Q. When Trump married his first wife Ivana Zelníčková, on April 7, 1977, who performed the ceremony?

Q. How many children did Donald have with Ivana?

Q. What are the names of the three children Donald Had with Ivana?

Q. Where was Donald Trump born and raised?

Q. Did Trump receive a bachelor’s degree in economics from what university?

Q. In what year did Ivana become a U.S. Citizen?

Q. In what year did he take control of his family’s real estate and construction firm, Elizabeth Trump & Son?

Q. What did he change the name of Elizabeth Trump & Son too?

Q. Ivana Trump was granted an uncontested divorce in 1990, on what grounds?

Show Answer
That Trump’s treatment of her, such as his affair with Maples, had been ‘cruel and inhuman’.

Q. On what television network did the Apprentice air?

Q. In what year did Trump seek the Reform Party’s presidential nomination?

Q. In what neighborhood in New York City was Donald born?

Q. Donald was the second youngest of how many children?

Q. What did Trump name his modeling company?

Q. Where does the company operate?

Show Answer
In the SoHo neighborhood of Lower Manhattan.

Q. How many foreign fashion models has Trump Model Management brought to the U.S. to work since 2000?

Q. Trump is a World Wrestling Entertainment fan, and a friend of whom?

Q. Trump has hosted how many WrestleMania events in the Trump Plaza?

Q. Trump’s Taj Mahal in Atlantic City was host to what wrestling event?

Q. In what three years did Donald Trump consider running for President?

Show Answer
Citizenship and eligibility to serve as President.

Q. Donald also repeated a debunked allegation that Obama's grandmother said she had witnessed what?

Show Answer
His birth in Kenya.

Show Answer
He would not run for president in the 2012 election.

Q. In 2013, Donald spent how much money to research a possible run for president of the United States?

Q. In October 2013, New York Republicans circulated a memo suggesting Donald should run for what office?

Show Answer
Governor of the state in 2014.

Q. What did Trump officially change is party affiliation to in 2009?

Q. What did Donald announce was his campaign slogan?

Q. Trump ran as a self-described what?

Q. The alt-right movement coalesced around Trump's candidacy, due in part to what?