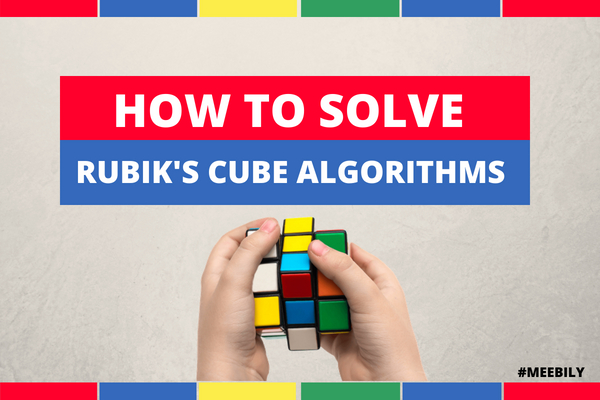 Don’t be a fool by the small size of the Rubik’s cube as it looks really easy to sort out but can drive you nuts while solving it if you aren’t following any proper method to get it sorted out. Popular among kids, teens, and tweens, the Rubik’s cube is a unique combination of mental satisfaction and entertainment at the same time. Without further ado, let’s get our thinking hats on and drive into the crazy world of the Rubik’s cube and its technical step wise solutions.

The Cube: The Ultimate Guide to the World's...
Check Price

How to Solve Rubik’s Cube Algorithm 2×2

It’s better to begin solving 2×2 Rubik’s cube with the help of below stepwise guide before attempting 3×3 Rubik’s cube.

Randomly choose a color from where you want to start solving Rubik’s cube of 2×2 algorithm. Suppose you choose the Red color. Select any corner that has this chosen color and try to other bring three corner pieces to it. In order to verify your first move, please check that the sides of the corner pieces should fit each other (not only the specific chosen color).

Once you solve one layer, flip the Rubik’s cube upside down. Flipping the cube has the purpose to direct the last layer pieces in sequence. In contrary to the first step, the permutation of the corner does not matter. In order to verify if you got the correct outcome, the opposite of the chosen color will be completed. By using this case, one can get seven possible solutions of the last layer. However, the Rubik’s cube can be solved by using any one possibility.

Step 03 – Permutations of the Last Layer

Permuting the last layer is what we intend to do in this step. All you have to do is to look for any two corners that are permuted in the correct manner i.e. same color on mutual faces and the same color on two adjacent faces.

Summarized three steps to solve 2×2 Rubik’s cube are solving the First Layer, Orienting the last layer and solving the final layer. These above three steps will get you to the destined solution of 2×2 Rubik’s cube. Try learning the algorithm by heart so that you can speed up your cubing skills to impress your friends and family.

How to Solve Rubik’s Cube Algorithm 3×3

It’s hard to find someone who hasn’t yet tried solving Rubik’s cube be it a successful attempt or a failed attempt. Below six very easy steps will guide you to the way of solving 3×3 Rubik’s cube.

Edge pieces: 12 edge pieces located in the middle row and these are pieces with two colors.

Corner Pieces: 08 corner pieces located at the corner of the Rubik’s Cube and these are pieces with three colors.

Center Pieces: 06 centerpieces located at the center of the Rubik’s cube.

To make a white cross with the pieces on Edge of Rubik’s cube should match the centerpieces.

On Up face, there should be White cross making Up face solved by White corner pieces.

Now you have a complete White layer on the bottom so you can proceed to solve the middle layer by trying to position edge pieces in the correct order.

Your goal in this last step is to solve the Rubik’s cube completely. All you have to do is to locate at least two corner pieces in the right location on Up face. On getting all four corners in the right place, go forward to the next sub-step.

How to Solve Rubik’s Cube Algorithm 4×4

Try solving the first center block and choose any random color to begin with. If you have mastered solving 3×3 Rubik’s cube then you will face no major problem during solving the centerpieces.

Step 02 – Coupling the Edge Pieces Together

Identify identical twin colors and pair the edge pieces up while keeping the edge blocks completely worthless in Step 02 only.