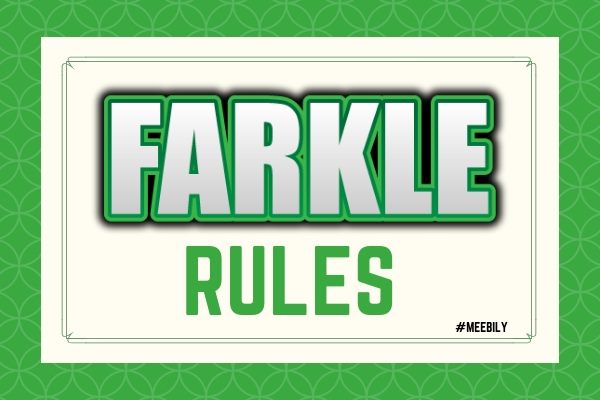 If you have been bored of playing Ludo, then Farkle will definitely excite you. Have you ever wondered t why there are not any dice games other the Ludo? Actually, there always have been, but you were negligent. There are many of them, including Farkle which gain commercial popularity in the 1980s. But unlike Ludo, Farkle is played with 6 dice. Hey, relax, mentioning 6 dice was doesn’t mean to stress you out of the game.

Though it has 6 dice when it comes up to set up and gameplay, Farkle dice game rules are the simplest. The scores are recorded in a piece of paper and that’s it with the game.

Interested in more board games? Do give a read to Bunco Rules: How to Play Bunco Game

Find out below the game rules, equipment and how it is played.

The Objective of the Farkle Game

The core of the game is primarily, your LUCK! If it’s your day, then definitely FARKLE is yours. The objective of the game is nothing but to roll the dice, obtain the possible combinations and subsequently earn points.

The game is typically played until the player gets 10,000 points. There is no limit to the number of players who can play Farkle at a time. However, the 8-player game works the best, always. It can be played in teams. With that, the winning points are doubled to 20,000. Sounds huge? But, it won’t be a strenuous task top earn them once you start playing the game.

The most likable aspect of Farkle is the fact that it requires very simple equipment’s to play the game. Pretty sure, they will be always found at your home. Following are the 5-essential equipment:

There is no doubt that this 21st century, and just like there is a modern version of everything out there, Farkle’s latest version comes in a box. You can simply buy that to save yourself from any hassle.

It is up to the player, to select their own scoring dice. Once selected, they can either bank their points by passing the turn or take the risk to earn more points. To make the game more fun, Farkle dice game rules are a bit tricky and special. According to these rules, 1 and 5 dice are special in a sense that only these dice can earn you scores when rolled out of the combination) of 2s, 3s, 4s or whatever).

A Farkle occurs when no point dice appears in a turn and the player loses all points earned in that particular turn. Rolling-turn is passed to the person on the left and no point is recorded in the marking sheet. If in due course, all six-dice come up as point dice then the player is given a second chance to roll the dice prior to passing the turn to the next player. Three Farkle in a row is definitely threatening and luck as they lead you to lose worth 1,000 points. A score of 10,000 by anyone the player is the indication of the start of the final round.

However, the electronic version of the game has now modified rules.

Get all the players around the flat-surface and decide who will roll the dice first. The player with the highest rolls gets the first turn and everyone else is followed by them in a clockwise direction. Before starting the game, it is important that everyone is familiar with the standard game points system. The game begins with the first player’s roll.

All six dice are rolled followed by removal of one-point dice. The player has the liberty to continue rolling the remaining dice or stop and let another roll. It is recommended not to set aside all point dice simultaneously. Sometimes, it is in your favor to set aside 1 only and roll rest of the dice as it provides a greater probability to get a combination of three of a kind. If you are lucky enough you may get a chance of setting aside all dice. In this scenario, you can re-roll your all 6 dice and keep on earning points.

Farkle dice game rules may sound tricky when you read them for the first time but with the time you realize that they are logical. No player can count on any points unless they score 500 in a single round. Once scored, they have the choice to roll the dice again to earn more points or play safely and pass on the turn.

It shall be noted that scoring is based on the selected dice at the beginning of a roll. For example, rolling a 5 will earn you 50 points. Rolling two 5s next time will earn you 100 points. But, you cannot combine these three 5s to earn 500 points.

As with the Farkle dice game rules, you need to score at least 10,000 points in order to win the game. 10,000 points actually mark the beginning of end game sequence. Each player is then given a chance to score more than you. Once everyone is done with their turn, the player with the highest score wins the game. It’s as easy as it sounds!

Check Out: Kickball Rules: How to Play Kickball Game

2 thoughts on “Farkle Dice Game Rules: How to Play Farkle”