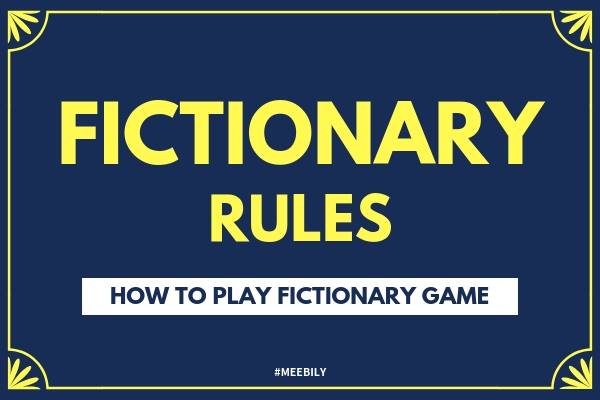 If you are bored but tired of playing outdoor games as well, then you gotta play Fictionary game. Fictionary is a rich game no matter how basic the idea is. Every game is different from the one played before. You can never get jaded of playing fictionary. This game literally needs no energy and stamina. The only thing required in this game is good vocabulary and passion to play a game and win it. But, the fun part doesn’t negate even if you lose it.

Fictionary is also known as ‘The Dictionary game’ where players try to guess the meaning or definition of a totally horrendous English word. You now know why is it called a Dictionary, isn’t it? As simple as the name, the fictionary rules are simpler and with no restrict regulations.

The interesting thing about fictionary is that it revolves around one’s personal attributes. So, if you are witty and tend to be explanatory in your casual conversation then it would be more convenient for you to follow fictionary rules. Fictionary is famous more like a parlor game and this might intrigue you. But, worry not you can still play it if you don’t visit parlor often. Fictionary doesn’t require a specialized setup so you can play it any party with around five to ten players. However, the optimum number of players is six.

To play Fictionary, you just need a dictionary, paper, and pencil. That’s it. Make sure you choose a leader before starting the game. Each player gets two sheets of paper. One to write the forget definition with their name on the top and other to write the guessed definition.

The game begins with leader announcing the most obscure word by choosing it from the dictionary. The leader writes the correct definition of the word on a piece of paper while all other participants are then given one minute to fabricate and write false definitions to the same word. All definitions are then submitted to the leader.

The leader then reads aloud all definitions including the actual one. Players are then supposed to vote for what they think is the right definition. In the course, player voting for actual definition scores the point. The game consists of various rounds. A round is completed when every player had a chance to choose a word from the dictionary. As the fictionary rules are simple, scoring is simpler, and it depends on how smartly you play the game.

A player voting for right definition scores a point. Moreover, a player also gets a point when people vote for their false definition. Even if a player knows the right definition of the word, they are not supposed to right the actual definition, rather than can fool others and score the point. This is the point from where the fictionary fun begins.

According to the standard fictionary rules, use 3*3 sheets to write down definitions on it. The game begins with choosing a reader and every player gets a chance to be a reader in every round. There lies no advantage in becoming a reader earlier or later. The reader chooses out the word from the dictionary and people must write false definitions to that word even if they know what the actually the definition is.

When you are a reader, look through the dictionary and choose a word which is humorous but strange at the same time so that people cannot guess the definition or have to go through a hard time. When all players are done writing their false definitions, they must submit their sheets to the reader.

It is the duty of the reader to mix them carefully with the actual definition. In order to avoid any confusion, the reader can number the false definitions and read them out with numbers. It will be easier to vote then. After every round, the job of the reader is changed.

The turns are rotated in clockwise, most of the times but this rule is not compulsory to follow. It is better to play more than one rounds when you are a group of seven to eight people. However, the standard factionary rules are to play the game with two full rounds. Please, use the neat handwriting so that reader can read out the definition correctly or else they can be charged for bluffing. Both forged and correct definition must be read twice so that people have enough time to make a guess for the right definition.

For example, if seven players are in the game then the reader will get a score of six because none of the six players were able to guess the correct definition. This might be in favor of reader or might not be because it is the only way a reader can score points any round. Let us tell you a rule or scoring strategy that you might not find anywhere else. A good strategy to earn points is to vote for your own definition if you think you cannot guess the right definition.

If you find all this interesting, you might also want to get a commercial version of Fictionary. Unfortunately, you might not find it as fictionary exactly, but commercial versions are available as Balderdash, Dictionary Dabble, and Flummox. You can play this game in the family, classroom and even with your colleagues.