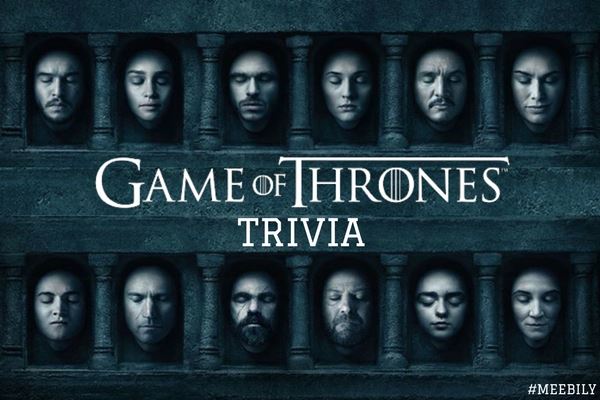 Games of Thrones have been quite popular among people of all ages. A fantasy drama produced by David Benioff and has so far garnered dozens of awards. The series initiated back in 2011 and within no time gained un-ending popularity. GOT, a television series that encompasses everything from seductive romance to thrilling warfare. GOT’s storyline has been inspired by ‘A song of Ice and Fire’ a novel series authored by George R.R Martin.

Look no further as we have compiled the ultimate Game of Thrones Trivia Questions & Answers Quiz that serves as a challenging GOT themed game for all the die-hard fans. Work your head around some interesting yet difficult Game of Thrones trivia questions in the seven kingdoms. Play the GOT trivia quiz not by wielding a sword at your friends and family but your superior knowledge about Game of Thrones that can aid you in winning you the Iron Throne.

Q. In the series, Jon’s direwolf was named?

Q. What can kill a White Walker?

Q. Who is the Master of Whisperers?

Q. Who was the Lord of Lightning?

Q. How are Meera and Jojen related to Howland Reed?

Q. Bran Stark was named after his?

Q. Bastards of the Reach were given the name of?

Q. What type of cake does Sansa Stark like to eat?

Q. Which character from the series says the Valyrian word “Dracarys”?

Q. Mention the total number of kingdoms in Westeros?

Q. When Cersei Lannister became the Queen of Westeros which house was extinct?

Q. The name of the direwolf who died in Season 1 was?

Q. Those who live towards the South of the wall were called?

Q. Who did Petyr Baelish love since he was a little child?

Q. Who gets badly stabbed in the eye?

Q. What is the natural hair color of Sophie Turner?

Q. Who played Sansa in the series?

Q. What was the real-life name of the actress in the series who also played Hermione’s Mom is Harry Potter?

Q. Lisa Bonet is the long-time girlfriend of which Games of Thrones actor?

Q. Rob Stark’s new wife in the series is actually whose grand-daughter?

Q. Name the real-life profession of Kristian Narin who plays Hodor in the show?

Q. Which child star from GOT also played a role in “Love, Actually”?

Q. Jacob Anderson is actually a musician who works under the name?

Q. In real life how old is Thomas Brodie who played Jojen Reed?

Q. Hafter Julius Bjrnsson (The Mountain) is ranked at which number as the Strongest person in the world?

Q. What kind of disability does Peter Vaughan has in real life too?

Q. What is the name of the actress playing Arya Stark?

Q. How is Harry Lloyd (Viserys Targaryen in the series) related to Charles Dickens?

Q. Who was Sibel Kekilli (Shae) before getting a role in GOT?

There are around 20 houses in the game of thrones but only 09 are main houses. The names of nine major houses of Game of Thrones are:

Q. Which of the houses words are “As high as Honor”?

Q. Which house’s sigil is a cross with a man hanged upside down?

Q. Name the house whose words are “We do not Sow”?

Q. Name the house whose seat is located in Casterly Rock.

Q. Name the house whose words are “Fire and Blood”

Q. Name the house which dominates The Riverland

Q. Name the house whose seat is in Highgarden

Q. Name the house whose words are “Our Blades are Sharp

Q. Name the house which dominates the Stormland

Q. Name the house whose words are “First in Battle”

Q. Name the house which dominates the Iron Islands

Q. Which house rules from Castle of Winterfall?