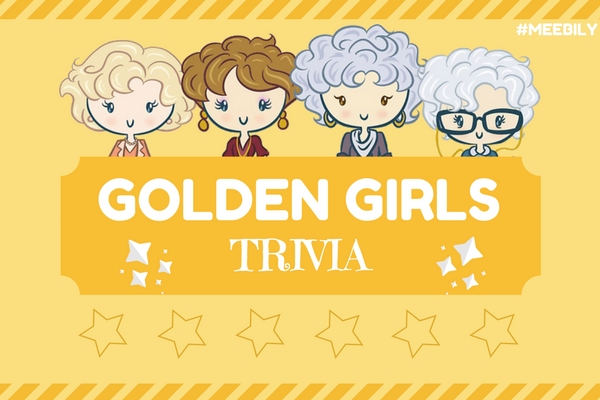 If you have been looking for the Golden Girls Trivia questions quiz, then wait no more to browse through the list and discover for yourself. The Golden Girls show is about four mature women who share a house and amusement. The show leads you to a hilarity like never experienced before, with its brilliant characters: Dorothy, the sarcastic one; Rose, the dreamy one; Blanche, the pretty one and Sophia, the blunt one. Each of the four stars received an Emmy Award, making it one of only three sitcoms in the award’s history to achieve this. Along with that, the show won numerous awards and top rankings. First aired in 1985 but the show still appeals today’s generation with its smart jokes and bold topics.

We’ve prepared the perfect Golden Girls trivia quiz to challenge your friends and family. Ask away the Golden Girls Trivia Questions to see if you still remember the characters, their punchlines, and the right answers to questions after all this time. But first, go through our astonishing Golden Girls trivia facts that will blow your mind.

Q. What was Sophia’s husband’s name?

Q. Where was Blanche from?

Show Answer
She was from Atlanta, GA.

Q. What was the name of Rose’s husband?

Q. What are the names of Dorothy’s two children?

Show Answer
He was a monk.

Show Answer
He was a farmer.

Q. What did Rose’s adoptive parents want her to be when she grew up?

Q. Blanche had a gay brother, what was his name?

Q. What famous ’80s celebrity do the Golden Girls wish to meet in Miami?

Q. What is Dorothy’s career?

Q. Where is Rose from?

Q. What is Sophia’s nickname for Dorothy?

Q. What is the color of Blanche’s wedding dress?

Q. Which Golden Girl became distraught when she started menopause?

Q. Where did Dorothy grow up?

Q. Which Golden Girl got married in the series finale?

Q. What was the name of Harry the neighborhood vet’s dog?

Q. And what comedic actor played the groom in that final episode?

Q. What was Blanche’s father’s nickname?

Q. What was the name of the piano bar “fought over” by Blanche and Dorothy?

Q. What was Dorothy’s childhood nickname?

Q. What 70’s actress – known for her role as Ida Morgenstern on Rhoda – played Sophia’s sister on the show?

Q. What was the name of the mean neighbor lady who dropped dead after Rose told her to “drop dead” in the episode, “It’s a Miserable Life”?

Q. Dorothy sought help for her addiction to what?

Q. What was Sophia’s infamous phrase?

Q. What kind of car was Dorothy knocked up in?

Show Answer
It was a Studebaker.

Q. What is the name the retirement home Sophia lived in?

Q. How long were Dorothy and Stan married for?

Q. What does B.E.D stand for on Blanche’s book by her night stand?

Q. What event leads Rose to become a nervous wreck?

Show Answer
After a break in, Rose becomes paranoid that the robbers will come back and kill them.

Q. Who do Dorothy and Sophia dress up as for the Shady Pines Pageant?

Q. What fairytale story do the Golden Girls perform a play for?

Q. What was the name of the spin-off starring McClanahan, White, and Getty?

Q. What caused the fire at Sophia’s retirement home?

Show Answer
It was because of a waffle iron.

Q. What did Dorothy often threaten her mother with?

Q. Where is the show set?

Q. In the pilot, why did Sophia, Dorothy’s mother move in with her?

Q. Why did Rose say she lost the St. Olaf Butter Queen Pageant?

Show Answer
Because she was the victim of churn tampering.

Q. Where did Dorothy and Blacnhe work at the same time?

Q. What secret was revealed about Rose’s boyfriend, Miles Webber?

Show Answer
That he was hiding from the mob.

Q. What are the unusual circumstances surrounding Dorothy’s birth?

Show Answer
She was born on a pinochle table in a bar!

Q. According to Rose, what is the motto printed on St. Olaf’s license plates?