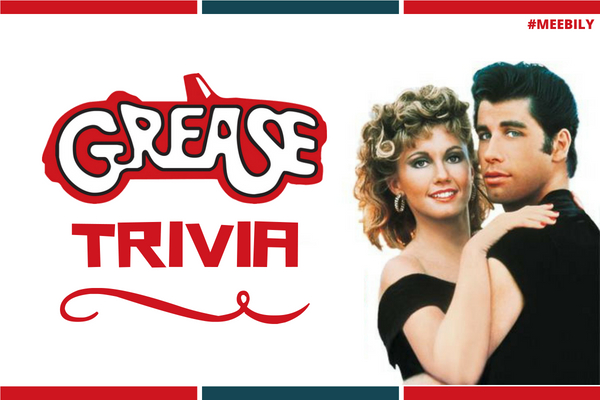 Movies and films from the 70’s are still quite popular not only among the adults but also among the youth. One of the most popular films of the 1970s is “Grease” which was directed by Randal Keliser and produced by Robert Stigwood and Alan Carr. Being a mix of musical, romance, and comedy, it is one of the most-watched movies of all time. The plot of the movie is based on a love story where a greaser and an Australian blonde fell in love and that’s how their love story began. Not only the love story but the comedy and humor used in the film are impeccably seamless as well.

Movies nowadays are not as good as they were before. One actually experiences the romance, comedy, and humor of the film at the same time. After its release, Grease became quite a hit both among teenagers as well as adults. If you rather prefer the films from the 70’s and are a big fan of Grease than you have certainly landed in the right place. We have designed the ultimate Grease Trivia Questions & answers quiz game which will allow you to enjoy a little more, dig a little deeper, and laugh a little louder. So, what are you waiting for? Turn on your computer and start playing a fun and interesting Grease Trivia Quiz Game. Trust me you’ll have real fun.

Q. What extracurricular activity did Sandy join when she first started at Rydell High?

Q. Who did Danny win the dance-off with?

Q. Who was the leader of Pink ladies?

Show Answer
At the beach.

Q. Who was originally asked to play Danny Zuko in the movie?

Q. Who does cheerleader Patty Simcox end up with at the end of the movie?

Q. Sha-Na-Na appeared as what musical group in the movie?

Q. What two ”Grease” actors were related in real life but not in the movie?

Q. What is Rizzo’s first name?

Q. What color does Frenchy accidentally dye her hair while attending beauty school?

Q. What does Frenchy try to do to Sandy, when all the girls are spending the night together?

Q. What are the names of the Pink Ladies?

Q. What are the names of the T-Birds?

Q. Michael is the newcomer in ‘Grease 2’. How is he related to Sandy from the original ‘Grease’ movie?

Show Answer
He is Sandy’s cousin.

Q. What kind of instrument does Michael play?

Q. Who plays the part of Stephanie in ‘Grease 2’?

Q. What is the name of the gang that Michael wants to get into?

Q. What did Frenchy claim earned her the nickname, ‘Frenchy?’

Q. In what year did Grease take place?

Q. Where does Danny think Sandy is going at the end of the summer?

Show Answer
Back home to Australia.

Q. What mode of transport does Michael use to impress Stephanie?

Q. What color do the girls always wear?

Q. What school does Grease take place in?

Q. What is the name of the road that Kenickie is supposed to race his car on?

Q. What is the name of the place where the T-Birds and the Pink Ladies like to hang out?

Q. Where did Sandy move from before she went to Rydell High School?

Q. What is the name of the car that Kenickie buys, dubbed by Danny?

Q. Why did Sandy become ill during the sleepover at Frenchy’s house?

Q. Why did Frenchy drop out of beauty school?

Show Answer
Because she missed her midterms and flunked her shampoo.

Q. What was the name of the athletic boy that Sandy went out with after Danny blew her off at the pep rally?

Q. What did Sandy’s parents want Danny to come over for?

Q. According to Kenickie, a hickey from him is what?

Q. Where were Sandy and Danny when he asked her to wear his ring?

Q. What did the teacher, Mrs. Murdock, say about Kenickie’s car when it was all finished being fixed up?

Show Answer
It’s as hot as the parts on it.

Q. Other than pride, what were the guys racing for at Thunder Road?

Show Answer
Ownership of their cars.

Q. What song did Sandy and Danny sing together at the carnival at the end of the movie?

Show Answer
You’re the One That I Want.

Q. Who sings the opening theme song to the movie, which is also called ”Grease”?