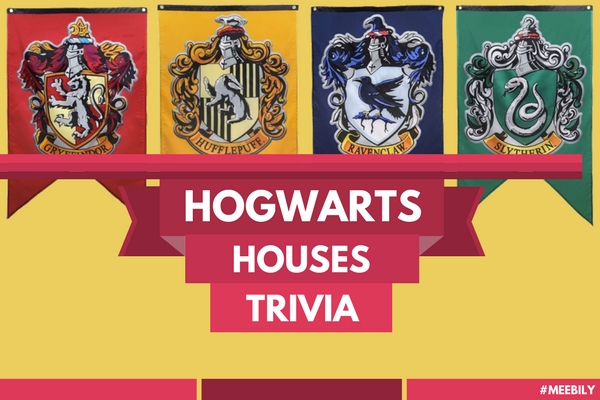 Imagine that you’re ten, you’ve received your Hogwarts letter and taking the train on platform 9 and 3 quarters you arrive at Hogwarts School of Witchcraft and Wizardry. The excitement and curiosity is gleaming in your eyes. Along with hundreds of other just like you, you walk into the Great Hall for the Sorting Ceremony. The new generation of Hogwarts first-year students will be placed into four Hogwarts Houses.

The Sorting Hat moves through your mind to decide if your primary characteristics are courage and bravery (Gryffindor), determination (Slytherin), hard work and fairmindedness (Hufflepuff), or intellect (Ravenclaw). Regrettably, we didn’t receive our letter and live with the brand ‘muggles’ but we can still find out which house would we be sorted in if we were lucky enough to be a wizard. Our Hogwarts Houses trivia questions and answers quiz compilation let’s all the muggles like you to testify your knowledge when it comes to be the ultimate Potterhead.

The official website of Harry Potter series, www.pottermore.com lets us muggles pretend to have the enchanted life we have dreamed of all our lives.

Here are Hogwarts Houses Trivia Question and Answers for you and your friends to play along and experience a fun filled trivia reunion. Let’s see if you get more than 90% right. And if you do then Hogwarts made a mistake by not sending you your letter.

Q. Name the famous ghost that wanders the common room of Gryffindor?

Q. What is the name of the founder of Ravenclaw?

Q. In ”Order of the Phoenix”, who dated Harry and they had their first kiss in the Room of Requirement ?

Q. What is the name of the ghost of Hufflepuff?

Q. Who is the Head of Hufflepuff House?

Q. Who is the founder of Slytherin?

Q. The Sorting Hat belonged to the founder of which house?

Q. Cedric Diggory is a contestant in the TriWizard Tournament. Which house is he from?

Q. You may belong in Hufflepuff, Where they are just and loyal. Those patient Hufflepuffs are true, and unafraid of what?

Q. Who was the first person to be sorted into Hufflepuff?

Q. Who is the Head of Gryffindor House?

Q. Who is the Head of Ravenclaw House?

Q. What is the ghost who used to be in Slytherin in his real life?

Q. Who was the first person to be sorted into Gryffindor in Harry’s year?

Q. Name the ghost that roams around Ravenclaw House?

Q. Who founded the Gryffindor House?

Q. Which founder brought house elves to Hogwarts to work in the kitchens?

Q. Who is the Head of Slytherin House?

Q. What was the monster in the Chamber of Secrets?

Q. What is the full name of the imfamous Slytherin wizard, Lord Voldemort in English?

Q. Who is undoubtedly the most infamous wizard that was in Slytherin?

Q. Name the founder of Hufflepuff.

Q. Which house was Harry Potter almost sorted into?

Q. In ”The Prisoner of Azkaban” who is the Hufflepuff seeker?

Q. Who is the Head of House for Hufflepuff throughout the seven books in the Harry Potter series?

Q. Which of the four Hogwarts Founders left the school, after a falling out with the other three? ww Salazar Slytherin. [/su_spoiler]

Q. Which house is the traditional rival of Gryffindor house?

Q. Which house is associated with bravery?

Q. How many points did Gryffindor house have at the end of Harry’s first year?

Q. How many points did Hufflepuff have at the end of book 1?

Show Answer
No, they didn’t as Cedric Diggory caught the snitch.

Q. The Fat Lady guards the entrance to which house’s common room?

Q. The members of which house are considered to be humble and down-to-earth?

Q. Which house’s common room can only be entered after correctly answering a riddle?

Q. Gilderoy Lockhart was sorted into which house?

Q. How many people founded Hogwarts School of Witchcraft and Wizardry?

Q. What is the animal of Ravenclaw House?

Q. Each Hogwarts House has a common room and dormitories. How do you get into the Gryffindor common room?

Show Answer
By repeating a password to the portrait of the Fat Lady.

Q. Which house is associated with high intelligence?

Q. Which house has its common room in the dungeons?

Q. What are the colors of the Gryffindor House?

Q. What is the animal of Hufflepuff House?

Q. What are the colors of the Hufflepuff House?

Q. What is the animal of Gryffindor House?

Q. What are the colors of the Ravenclaw House (according to the books)?

Q. What is the animal of Slytherin House?

Q. What was the first password Harry had to get into Gryffindor Common Room?

Q. What are the colors of the Slytherin House?