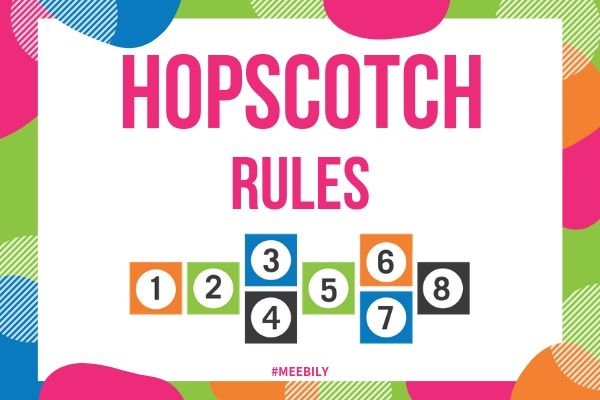 Among many other sport games that have been around, Hopscotch is the most popular among kids. A favorite for kids worldwide, Hopscotch is played with friends and sometimes alone. The word hopscotch itself is from hop and scratch since players scratch the court on the sand, ground or any other surface.

Once, the court is scratched the players hop on it as stated by Hopscotch rules. A favorite game for improving balance, coordination and physical agility, there are variations in hopscotch rules. However, there are few of them that are common and abide by to play the standard hopscotch game.

Hopscotch was one of the games that Roman soldiers played, following the basic hopscotch rules. To increase the physical strength, they played hopped on 100 feet steps, while carrying the heavyweights. Don’t worry if you didn’t learn the game at an early age, the hopscotch rules are easy to understand and always fun to play. The game won’t take much time to be familiarized with it.

Equipment and Layout of Hopscotch

The three main things required to play Hopscotch are simple and easy to find at home. We assume this is the reason, the game is loved by parents and children, globally. So, the first thing you need is chalk to draw the hopscotch court on the flat ground. For the ground, you can choose the beachside sand or any pavement.

As the most followed hopscotch rules say, draw the hopscotch pattern of eight squares. Number these sections. The number 8 section/square is often designated as home. This is the square on which the players can rest and regain their balance. Depending upon the age of your children, these squares can be from six and eight feet long and three-four feet wide. The next thing you need is bottle caps, shells, buttons, rocks or any object that can act as a marker. These objects are thrown on each square respectively, indicating the point of beginning of hopping.

A stopwatch is required when you are playing the time game.

You can do toss to choose who goes first or simply decide yourself if all players agree on the decision. The person going first in this round will go first in all rounds. Throw your marker on the hopscotch court so that it lands on the square marked as 1. If you succeed, well and good. However, if you fail to do so, your turn is over, and you will have to try the same in your next round.

The marker landing on the right place directs you to start hoping. Avoid the number 1 square with the marker on it, hop on other squares in ascending order till you reach number 8 square. If you succeed doing so, you will have to come in descending order towards the point from where you started.

When you throw the marker on the hopscotch court, make sure it doesn’t touch the boundary of the square. If it does so, your turn will be over and the next player has to try their luck. No player is allowed to hop on the squares having the marker over them. While hoping, you can only use your one foot on each square. If you happen to use two in any of the squares, you incurred foul and hence, you turn is over. You will start all over again, in the next round. If the two squares are adjacent to each other, then you can use two legs to hop on. Your right leg would be on the right square and vice versa. If the marker object falls out of the square during pitching, then this is also considered a foul.

Players can hop on their home square in any manner they want (with either one foot or two). For instance, if squares are marked from 1-8 then, after reaching 7, they can hop on an 8th square with both feet. Now, the players must turn around and start hoping in a descending manner. On reaching the number 2 square, you shall pick your marker and hop out of the court avoiding the number 1 square. The game is continued to number 8 squares following the same hopscotch rules. Now, the player who has succeeded the first round will throw the marker on square number 2 and do the same process as followed before avoiding the square 2.

Note that players will continue throwing the marker object until they attempt a foul. On your way back to the point from where you started, do pick up the stone before moving out of the court. Every time a foul is incurred if a player steps on the line of the square, hops on the square with marker object, misses a square to hop on or place their hands on the ground.

The first player who succeeds in completing the hopping on all demarcated squares (with placing marker object on them one by one), wins the game. If any players happen to *incur* a foul, then they will start from the same round from where they left, in the next turn. Throwing the marker object on the squares is called pitching. Therefore, the player who pitches and hops first, covering all of the squares wins the game.

The Hopscotch can be played all alone as well. So, if you are playing it alone then alter the rules as they fit in. The hopscotch court can also be made circular to add more fun into the game. Adding more to the variations, the size and length of the squares/circulars can always be changed and made tougher in case you are interested in playing the game with various levels. If you are not interested in playing the game with the rounds, then no need to hustle. The game can be played in a single round with a set time-limit. The person with the lowest time counts on the stopwatch will win this game.