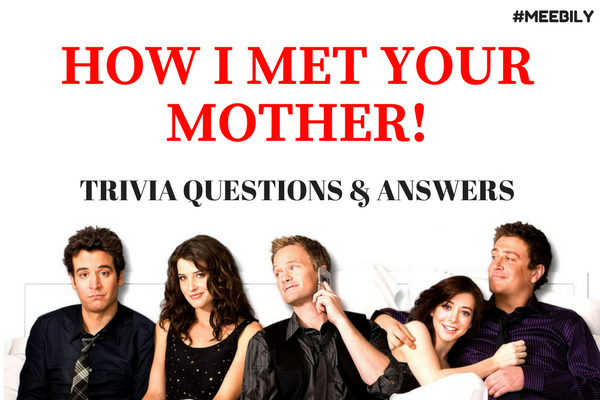 How I Met Your Mother often abbreviated as HIMYM is an American romantic comedy TV show that spans over 208 episodes aired originally on CBS. The series went on to win Nine Emmy Awards whose story revolves around a group of five friends.

The series is all about the adventures of Ted Mosby narrating his own story to his children about how he met the mother of his children and the below trivia facts and trivia questions and answers are all about “How I Met Your Mother” theme.

The whole story plays in a flashback starting with 27 years old Ted working as a professional architect living with his two best friends. The story exhibits roller coaster of romance and comedy that keep the viewers engaged throughout the series and the same amusement can be experienced while playing the “How I Met Your Mother” season trivia questions game that will surely keep the trivia game participants engaged throughout the trivia quiz.

Interesting How I Met Your Mother Facts

How I Met Your Mother Character Trivia Questions & Answers

Q. Name the creator of the sitcom “how I met your mother”.

Q. What is the real life name of Marshal’s character?

Q. What is the real name of Lily?

Q. What fake name does Victoria mostly use?

Q. What is victoria’s fiancé name?

Q. What is the name of Marshall and Lily’s doctor?

Q. What is Randy’s beer name?

Q. What is the name of Barney’s father?

Q. Which car did Ted and Marshal had on a college trip?

Q. Name the baby boy that Marshall and Lily had.

Q. Name the one with whom did Lily, Marshall and Barney hang out?

Q. Who is Ranjit?

Q. What relation exists between Barney and Loretta Stinson?

Show Answer
She was Barney’s mother

Q. What is Robin’s last name?

Q. With whom did Barney was grinding in the club Okay?

Q. What was the name of Not Moby’s name in “The Limo”?

Q. Name the most annoying couple in the episode “something new”.

Q. Robin belongs to which country?

Q. What profession does Robin has from in the play “How I met your mother”?

Q. Which character mostly uses suit up and legendary?

Q. What relation exists between Ted and Heather?

Q. What character is based on Ted in movie “ The Wedding Bride”?

Q. Ted and Barney dated the same girl. What is the name of that girl?

Q. What is the name of Ted, Marshall and Lily?

Q. In order to make Ted happy what does Robin show him?

Q. Name the unusual creature that Ted and Marshall has in their apartment?

Q. For how long did Marshal and Lily date each other?

Q. For how many years Lily was engaged to Marshall?

Show Answer
For one year

Q. Who always give Lily drink in season 9?

Q. Who did Barney asked to pretend like his deaf brother?

Q. Who is James’s partner?

Q. Who as the one to date Shannon in the season?

Q. What is the name of the “Slap Bet Commissioner”?

Q. Name the one who dated Carly Whittaker?

Q. Before Marshall, Lily and Ted who lived in their apartment?

How I Met Your Mother Trivia Questions & Answers

Q. What was the last item mentioned on the list that Barney tries to complete in the episode ‘Murtaugh List’?

Q. In 2001 at what place did Barney Stinson became friends with Ted, Marshall and Lily.

Show Answer
At a urinal

Q. From which bar does the entire five friends get their drink mostly?

Q. Except “the mother” how many girls did Ted dated?

Q. Why did Barney go to San Francisco to meet Lily?

Show Answer
To convince Lily to get back to Marshall

Q. How many times did the naked man worked?

Show Answer
Two out of three

Q. Where did Marshall express his love to Lily for he first time?

Show Answer
In the kitchen

Q. Name the place where Marshall grew up.

Q. What did Ted said to Audrey in sign language when Barney asked him to act like his deaf brother?

Q. Barney’s had many nicknames but what was his full name?

Q. In season 1 what profession does Ted had?

Q. In order to arrange a date with Robin how many parties did Ted arrange In ‘Purple Giraffe’?

Q. Where did Barney and Ted Lick the Liberty Bell?

Q. Name the sport that was invented by Eriksen family.

Q. Which song does we hear from Barney’s Get Psyched Mix In the episode “The Limo”?

Show Answer
Bon Jovi – You Give Love A Bad Name

Q. In the episode ‘The Pineapple Incident’ Barney burns something that belongs to Ted what it was?

Q. During the first episode where did Lilly got hit?

Show Answer
On her eye

Q. At the time when Robin met Ted how many dogs were there in the apartment?

Q. At what place did Marshall grow up?

Q. What was the name of the coffee shop that belongs to Barney?

Q. Name the pop star that had the role of starring the guests?

Q. Where did Lilly go after leaving Marshall at the end of season?

Q. Where did Robin move to at the beginning of the season 4?

Q. Name the character who kissed her own self on the camera in the season.

Q. Where did Regis Philbin and gang grab bites?

Show Answer
At “ The best burgers in new york

Q. What problem did Chloe had?

Show Answer
She had Crazy eyes

Q. Name the one who had a stripper Doppelganger?

Q. What was Ted’s ultimate invention?

Q. Name the band that appeared in the episode “Best Prom Ever”.

Q. By following which address one could reach the apartment easily?

Q. What was the age of Marvin Eriksen Sr. when he died?

Q. Ted along with his future boss visited an amusement park. Name that park.

Q. What was the name of the girl that Ted brought home along with him in the episode ‘The Pineapple Incident’?

Q. Gang remembers how many scenes of violence In ‘Mystery vs. History’?

Q. In which episode did the episode Lily and Marshall sing a duet of Don’t go Breaking’ My Heart?

Show Answer
“Life Among the Gorillas”

Q. Name the episode in which ‘Nothing Suits Me Like a Suit’ song was performed.

Q. During the play ‘Suck It Lily’ how does Barney tortures Lily?

Q. What is the name of the fruit that best describes an incident that took place involving Ted and Trudy?

Q. After how many days did Marshall and Lily get over their breakup?

Q. Which character is the funniest in the show?

Q. Which costume does Ted wear in Halloween every year?

Q. What tattoo did Ted get on his lower back when he met Amy?

Q. Where did Ted meet Trudy?

Show Answer
At the bar

Q. What incident happened to Lily when Marshall proposed her?

Show Answer
She got hit in the eye

Q. In which country How I Met Your Mother was set?

Q. Before meeting Ted What does Barney always tell him?

Q. Each episode of “how I met your mother” begins in which year?

Q. What was the last challenge Barney’s has to complete?

Q. In order to impress Robin which instrument does Ted steal?

Q. What thing did Ted pretend to buy in store in the episode “purple Giraffe”?

Q. According to Barney how many similarities exist between women and fish?

Show Answer
They have 24 similarities

Q. Lily’s apartment was turned into what in the episode “The Duel”?

Q. Name the sport that was created by Marshall’s family.

Q. What was the first thing on which both Marshal and Lily were agreed?

Q. On sandy what cutout does Ted and Marshall use in the episode “Mary the Paralegal?

Q. When things get uncomfortable on hat topic does Ted and his dad talk?

Q. In the episode “world’s greatest couple” to what concert Marshall and Brad go?

Q. What is the name of the security guard who helped Marshall and Barney?

Q. What is the name of Tony’s movie?

Q. Which three topics distract Robin in the play?

Q. Marshal wrote a song about a date in the play. What song it was?

Show Answer
It Was the Best Night Ever

Q. Which energy drink do Marshall and Ted have?

Q. When robin is upset where does she goes?

Q. In the episode false positive Ted wants to see a movie. Name that movie.