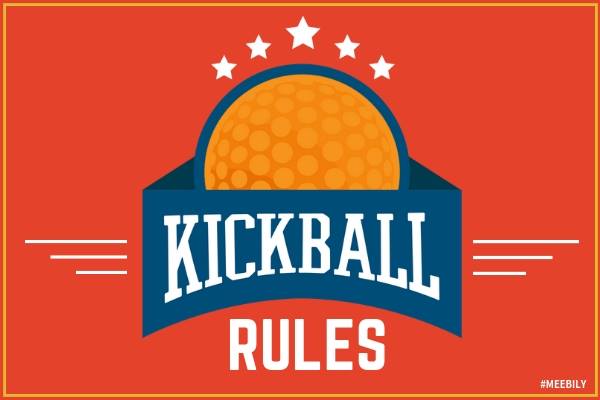 Are you a fan of baseball? But, bored of playing it every evening? We have a solution to your boredom. We wonder if you know about Kickball or not. With kickball, you can have a different game at your foot but the amusement of soccer at the same time. Another interesting part about kickball is its second name, soccer baseball. Do you know why? Because it suggests that it does not only has the pinch of baseball but the exciting rivalries of soccer as well.

Containing the basics of baseball, soccer, and softball, it was developed to introduce students of US to baseball basic. However, it gains quite a popularity as a sport and now stands as a different game from baseball or soccer. Kickball is primarily played in schools and after-school clubs but there are few adult groups, around the world, who enjoy playing kickball because they find it easier to follow the kickball rules. The detail and an easy understanding of kickball rules are mentioned below.

The objective of the Game

Talking about any game and not mentioning its objective is rather obnoxious. With the accompanied fun, any game is played to win it. Winning the kickball requires that you score more runs than your opponent. To get more score, everyone tries to kick the ball and run all the bases. While they are trying hard to score, the opposing team do their best to resist them, catch their ball and get them out.

Kickball is meant to be played on a square ground and that’s what WAKA (World Adult Kickball Association) says, with all the sides being 60-feet long. With the aforementioned layout, pitching mount needs to be 40-feet long and strike zone is 1 foot from either of the home plates and 1 foot high from the ground. There should be a straight strip in front of home plate but in-line with first and third base.

Let’s now head over to the placement of referees. Starting with the head referee, they stand by the home plate. The first base referee is placed on the foul line that passes by the first base. The head referee is responsible for calling all the final rulings. They are therefore advised to be not more than 10 feet away from the home plate and aligned near the baselines to assist in foul calls.

Though there is no restriction to the number of people playing the kickball according to the kickball rules, it shall consist of 8-11 members. Ideally, kickball is recommended to be played on a softball surface, but it can be played on any field if it has four bases in the diamond shape. Another important equipment is obviously, the ball. An inflated rubber ball of 6-18 inches in circumference is used for kickball if the kickball rules are abided by. But, people have also used a soccer ball on the number of occasions. No metal cleats can be worn by the players during the game, only athletic shoes are permitted.

Kickball is often comprised of 6 innings if WAKA rules are followed. The order of kickers is not defined but girl/boy or boy/girl is usually followed. Kickball rules don’t permit any stealing, leading or strikeouts. For the play to come to an end, the ball must reach the pitcher. There are three conditions when a player is declared out. Firstly, if the ball is caught by the opposing player.

Secondly, if they are dragged out and finally if they are forced out at a base. The integrity of any game is maintained only if players are honest. Hence, fare play is monitored quite often. Players are expected to move out themselves if they think they are at the fault, without waiting for referee’s decisions. Any team that fails to field with a minimum number of players within five minutes of a scheduled game is disqualified.

Likewise, teams with non-registered or improperly registered players are not allowed to play the game. Only captains and coaches can call a dispute and base coaches can be from the team members. On one hand, runners can overrun a base but no one can pass another runner.

Kickball rules don’t provide a variety of chances to score a run since it can be scored only if a runner reaches the home plate safely, after touching all the bases in the sequence, before the end of an innings. It requires the ball to be kicked in such a way that it travels a long distance. However, players must take of the fact that the ball doesn’t go out of the field, with an aim to score more than the opposing team. Also, the player is ruled out of the game if they are tagged by the opponent prior to reaching the home base. More like baseball, players continue to kick lest they accrue three outs.

Kickball rules are not complicated when it comes to winning the game. Once every team is done with their allotted innings, the team with a greater number of scores is declared a winner. In case of a tie, WAKA states that one chosen player from each team shall kick the ball towards the second base. The player with their ball closest to the secs if on base wins the game along with the team, obviously.

The game usually ends after 6 innings which approximately take 50 minutes, it is not tied. It is important to mention the fouls here. A kick that lands in foul territory and the kick that goes foul without passing the first and third bases and not touching the player is a foul. All fouls are counted as a strike. Therefore, players need to avoid them to win the game.

Since the major part of the game is to have fun and inculcate the sportsmanship in students, the kickball rule tends to vary from one school to another.

Head over to Bunco Rules: How to Play Bunco Game