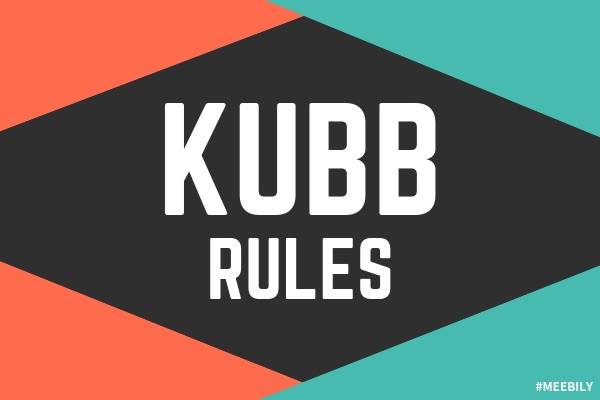 Kubb is a lawn game whose history goes back to either France or Scandinavia. It is one the most ancient games, being played even some 1000 years ago and this is a real deal. It had been played at the Islands of Gotland and Sweden since then.

KUBB name is originated from Kubbspel which means to throw block game. You can imagine how this game would had been the favorite hobby of young Scandinavian to collect firewood and that’s what makes Kubb rules interesting. The unique Kubb rules help you adjust them according to the age, skills, and imaginations of participants.

However, the game has now gained international recognition and is played annually as Championship tournament.

According to Kubb rules, the objective of the game is to knock down all wooden skittles by throwing batons on them.

When preparing for the equipment of Kubb game, you should know that the game cannot be played without the standard equipment of the Kubb and you must have them in order to begin. It requires you to have 10 small skittles, one large skittle and 6 sticks (also called baton) that you would be throwing to put down the skittles. The court for Kubb comes in these dimensions:

You can go with either of them but to mark the court you might need 4 corner stakes. However, Kubb World Championship is played with 8*5m dimensions. The lines demarcated in either side of the court are baselines while the middles lines run parallel to baselines through the middle of the court.

Kubb is played in a n open area; a lawn, beach or playing field. 5 kubbs are placed on baselines, one on either end, one in the middle and another two on equidistant between first and third, while the kind is placed in the middle of the court. The game is played in teams of 2 to even 6 for casual games.

Baseline kubbs are thrown in the center of the field and erected accordingly. These are then known as Field kubbs. In order to determine the first turn, one member from the team lands their baton on the middle. The team whose baton lies closest to the king gets the first turn.

Kubb rules are though easy but can be understood once the game is played. The kubbs placed on the baseline should be evenly spaced. Each turn of the game consists of four phases. Each team shall ensure that the sticks are thrown from behind the ‘throwing line’. Let’s discuss each phase in detail:

In this phase players’ objective is to land the kubbs nearer to the middle line so that they can be knocked down easily. The first phase is the crust of kubb rules. Players are allowed to collect the kubbs that were thrown during the opponent’s turn and thrown it back on half of the court of the opponent. If they fail to do so two times, opponents have the opportunity to place them wherever they want.

This phase is all about throwing sticks at the Baseline Kubbs of opponents. If a Baseline Kubb is toppled during this course before Field Kubb, the Kubb is returned to the upright position, however. The strategy here is to topple all Field Kubbs. If you do not do this, the opponents are able to throw the sticks from the closer point-meaning they have a bonus point here.

This phase aims at throwing sticks to the Baseline Kubb once the Field Kubbs are toppled. However, the players need to assure that they are throwing the sticks from behind the throwing lines.

This is the phase where the game moves towards its final leg. If you are able to topple all Kubbs, both Baseline and Field in opponent’s half, with the throwing sticks still in your hand, then it is the right time to topple the King placed in the center of the court. The King is toppled from behind the baseline, though.

It shall be noted here that when a team is done throwing all of its 6 sticks (with Kubbs still on the opponent’s half), the turn goes to the next team and the cycle is repeated continuously.

Each kubb game consists of three games and to win the match you need to be victorious in two games. If you throw the kubbs out of the boundary twice in a row, then the turn shifts to the opponent team and this is called penalty kubb.

The defending team has the opportunity to place the penalty kubb where ever they want. Another rule that changes the gameplay is the stacking.

Stacking allows you to pile up the kubbs that hit each other in a course of throwing baton. This makes it easier to topple down the field kubbs. Opponents need to keep this thing in mind while placing the penalty kubb that it is at least one-baton length from King or corners.

Since there is an equal distribution of batons to both teams then the tea having good throwers have a competitive advantage in knocking down the kubbs earlier.

However informal games, there is no restriction in the number of players in each team and any member can leave the game whenever they feel bored.

After reading the Kubb rules you might have realized that the winning Kubb game is not a rocket science. There is no hard and fast rule here except that you need to topple the Baseline Kubbs and Field Kubbs. Following them, if you succeed in toppling King, you are winner.

If a King is toppled by a Kubb or a stick thrown, before all Baseline and Field Kubbs are toppled then the team throwing the stick loses and the victory goes to their opponents.