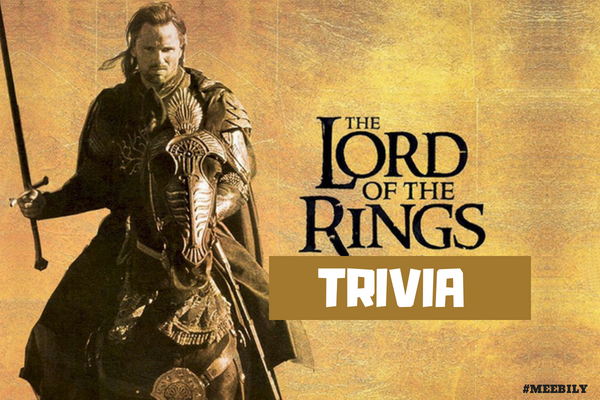 Both the books and their movie adaptations are amazing and catchy. The novels are written by the brilliant J. R. R. Tolkien and brought to life on our screens by the director Peter Jackson. Casting talented actors like Ian McKellen, Elijah Wood, Orlando Bloom, Viggo Mortensen, etc. the films snubbed many awards as well as our hearts.

Take this Lord of the Rings trivia quiz to find out how much do you really know about that world and test whether you are a true fan or not.

Interesting Lord of the Rings Facts

Q. Who possesses the ring of power at the start of the trilogy?

Q. Who do the hobbits encounter at the Prancing Pony?

Q. What is the name of the elf in the fellowship?

Q. What is the name of the dwarf in the fellowship?

Q. Who changes colour during ”The Two Towers”, from Grey to White?

Q. What is Gollum’s name for the Sun?

Q. Gollum killed his brother for the one ring. What was his brother’s name?

Q. When the pass of Caradhras is blocked, where does Frodo say the fellowship should go?

Q. Who is the first member of the fellowship to be separated from the group?

Q. Who has been following Sam and Frodo?

Q. Who is the king of Rohan?

Q. Who said this: ”One does not simply walk into Mordor.”?

Q. Name Aragorn’s ancestor who failed to destroy the One Ring.

Q. Whom does Aragorn love?

Q. How does Farmer Maggot keep people of his farm?

Q. Who is the steward of Gondor?

Q. Who said, ”They will find you. They will take the ring. And you will beg for death before the end!”?

Q. What is the name of the capital of Gondor?

Q. Name the Ent who befriends Merry and Pippin in Fanghorn forest.

Q. To whom does Pippin pledge allegiance?

Q. What Sindarin word was Aragorn known by when he was a child?

Q. How are Merry and Pippin related?

Show Answer
They are first cousins

Q. Who is the first hobbit to get married?

Q. Who was Elanor Gardner (also known as Elanor the Fair)?

Show Answer
The daughter of Samwise Gamgee and Rosie Cotton

Q. Who was Sanaga?

Show Answer
An orc who died at the hands of Samwise Gamgee in the Tower of Cirith Ungol.

Q. Who does Gandalf find eaves-dropping at the window of Bag End?

Q. What is the name of Gandalf’s horse?

Q. How many members make up the fellowship of the ring?

Q. How many Rings of Power were there, in total?

Q. What animal does Gollum give to Frodo?

Q. Where does Théoden decide to send his people?

Q. What’s the name of the one-of-a-kind item Thorin Oakenshield wants to find in the Lonely Mountain?

Q. ”The Lord of the Rings” was written as a sequel to which book?

Q. What forest creatures do Pippin and Merry come across?

Q. What does Elrond offer to Aragorn?

Q. What river runs along the eastern border of the Shire?

Q. How is the ring destroyed at Mount Doom?

Show Answer
It falls into lava

Q. What are “Durin’s Folk” more commonly referred to as?

Q. What kind of creatures are the spawns of Ungoliant?

Q. What creature did Sam come to care for as the Fellowship crossed the Misty Mountains?

Q. What is it called when the Ents get together to decide something?

Q. Name the creatures sent by Sauron to find the Ring.

Q. Who participated in the Battle of Isengard?

Q. What are the Morgul-wounds?

Q. What happened to Lobelia Sackville-Baggins after the war of the ring?

Q. What do the elves call the hobbits?

Q. What are the Palantíri and how many are there?

Q. What are the Two Watchers?

Q. Who was the only ‘Lord of the Rings’ castmember to have met J.R.R. Tolkien?

Q. What was the name of Gandalf’s sword?