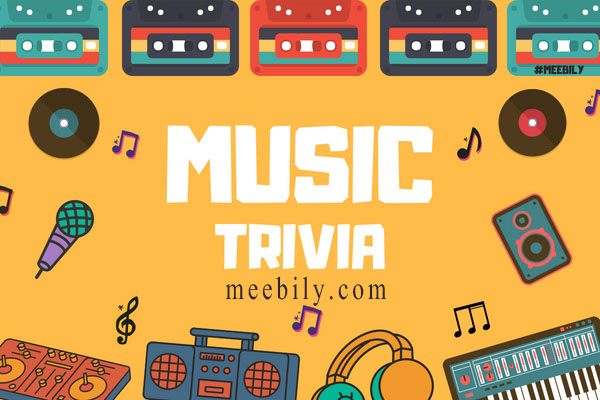 Music is an expression. It’s an emotion. We all listen to different types of music which we try to relate to. The singers and artists become our idols and we try to follow them all the time. Music is also a great topic of conversation, especially when you find someone who has the same choice of music taste as you. Then the conversation can go on for hours.

We have prepared a Music trivia questions & answers quiz through the decades for you and your friends to see how much of a music fan you are. The difficulty level of the music quiz varies from easier to difficult with but we’re sure music is something everyone has knowledge about.

Q. Who was awarded the very first gold record?

Q. Who made the highly rated 1959 jazz album Kind of Blue?

Q. The live album Beauty and the Beat featured pianist George Shearring and which singer?

Q. Which animal is represented by the Oboe in Peter and the Wolf?

Q. Which Welsh singer was born Gaynor Hopkins in June 1951?

Q. Who were the famous backing singers on most of Elvis Presley’s early hits?

Q. What was Emile Ford and the Checkmates’ 1959 hit, supposedly the longest ever question in a UK No1 song title?

Show Answer
What do you want to make those eyes at me for?

Q. Which American rock’n’roll star caused controversy when he married a young teenager?

Q. In which American state was Madonna born?

Q. Who were Cliff Richard’s backing group through the 60s?

Q. Who wrote and had a hit with the instrumental Classical Gas?

Q. Who had the 1965 instrumental hit Spanish Flea?

Q. What city hosted the Beatles as the resident band at the Kaiser Keller and Top Ten Club?

Q. Who won (barefoot) the British Eurovision Song Contest in 1967 with Puppet on String?

Q. Which group’s best-known recording is the 1967 single ‘A Whiter Shade of Pale’?

Q. The Isley Brothers’ hit was called behind a … what?

Q. Which English rock band, formed in London in 1969, takes its name from a fictional character in David Copperfield?

Q. What song, released to promote the film The Millionaires, featured its stars Peter Sellers and Sophia Loren?

Q. Who managed the Beatles’ prior to his early death in 1967?

Q. Whose nickname was a derived from the term satchel-mouth?

Q. Who was the famous rock guitarist in the group Love Sculpture, notably featuring on their breakneck hit version of Khachaturian’s classical piece Sabre Dance?

Q. Whose single ‘Glad All Over’ knocked the Beatles’ ‘I Want to Hold Your Hand’ off the top of the UK charts in 1964?

Q. Jimmy Page is an English musician who formed which rock band in 1968?

Q. What’s the name of the motor biker who dies in the Shangri-Las’ hit The Leader of the Pack?

Q. In which American city was Elvis discovered dead in 1977?

Q. What is the first name of Paul McCartney?

Q. Which singing-songwriting founder of the Flying Burrito Brothers died age 26, after which his body was ‘stolen’ by a friend and burnt in the Joshua Tree National Park?

Q. Which American singer and entertainer was nicknamed Schnozzola, because of his large nose?

Q. Who had the hit song I Shot the Sheriff?

Q. Who is the artist of the famous hit song Grease?

Q. Which Roxette sing featured the line “I’m not afraid, a trembling flower, I’ll feed your heart and blow the dust from your eyes”?

Q. Which country turned pop star named her album after her birth year, 1989?

Q. Which musical duo had the albums ‘Rockney’ and ‘A Christmas Knees-Up’?

Q. Whose childhood hit was Fingertips?

Q. Matt le Blanc played a Alanis Morissette’s boyfriend in which one of her videos?

Q. Dolly Parton had a 1981 hit with which song from the film of the same name?

Show Answer
Peter Tork (all members of the Monkees)

Q. Which hit song features the lyric “The love we share seems to go nowhere and I’ve lost my light”?

Q. Who sang the title track of the late 80’s James Bond film License to Kill?

Q. What pop singer is known as ”The Material Girl”?

Show Answer
You are not alone

Q. Which Radiohead album has been cited by musicians as one of the greatest albums of all time?

Q. Which singer-songwriter from Sale released the album ‘White Ladder’ in 1998?

Q. Actor Rhys Ifans is a former member of which Welsh rock band?

Q. Who was the only female solo artist to have a number 1 hit single without releasing an album?

Q. Who sang A Whole New World for Disney’s Aladdin?

Q. Which member of what rap band burned her football player boyfriend’s house down?

Q. Stewart Copeland was the drummer with which band?

Q. What is the better known stage name of Robyn Fenty?

Q. Whose band was the All Stars?

Q. How many strings does a violin usually have?

Q. Which singer appeared in the feature film, Battleship?

Q. In May 2015, who dressed up as George Michael to celebrate their 27th birthday and posted the snaps on Twitter?

Q. Daniel Stein, an English DJ and record producer known for his electronic music, is better known by what name?