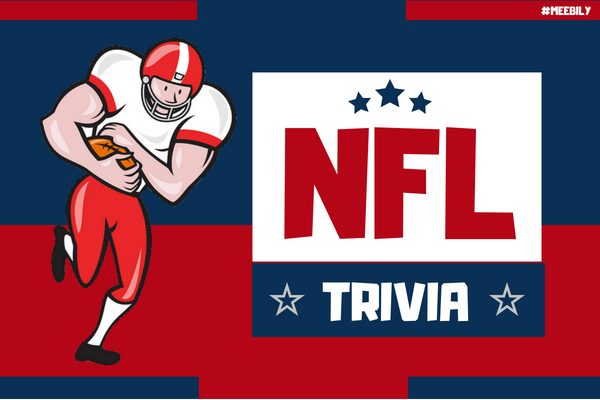 The NFL consists of 32 clubs divided into two conferences of 16 teams in each. Each conference is divided into four divisions of four clubs in each. During the regular season, each team is allowed a maximum of 53 players on its roster only 46 of these may be active on game days. Challenge yourself to play the ultimate NFL trivia questions & answers quiz game to excite and amuse you and your friends.

Q. What Cowboy’s 99-yard run from scrimmage put him in the NFL football record book in 1983?

Q. How many of the five Dallas teams Tom Landry took to Super Bowls were victorious?

Q. What teams played in the first all-California Super Bowl?

Q. What NFL team introduced the no-huddle offense during the 1980s?

Q. What quarterback got stuck with the given names Yelberton Abraham?

Q. What Pittsburgh Steelers great was the first wide receiver to be named super Bowl MVP?

Q. What Division 1-A football team’s fans cheer for the Yellow Jackets?

Q. What NFL team once had Bob Hope, Henry Mancini and Danny Thomas on its advisory board?

Q. What did a Buffalo fan hit Chuck Foreman in the eye with during a game?

Q. Who was involved as a player or coach in three Super Bowls with the Cowboys, two with the Eagles and one with the Bears?

Q. How many football teams play in the Big Ten Conference?

Q. What Vikings quarterback has been called the NFL’s ”original scrambler”?

Q. How many years must a player be retired to be eligible for the Pro Football Hall of Fame?

Q. What was Bob Griese the first NFL football player to wear in a game, in 1977?

Q. What record-setting quarterback was the NFL’s 82nd draft pick in 1979?

Q. What elusive Detroit running back has been dubbed ”the Lion King”?

Q. Who did the New York Giants beat by a point in the closest Super Bowl ever?

Q. What Jets quarterback, asked if he preferred grass or Astroturf, replied: ”I don’t know, I never smoked Astroturf”?

Q. Since 1991 the Detroit Lions have selected 6 WRs in round one, which of these is not one of them?

Q. Who was the last defensive player picked first prior to Jadeveon Clowney?

Q. How many teams have never had a first overall selection?

Q. 2013 set the record with for foreign players, how many were drafted?

Q. The last round one pick of a Crimson Tide QB was in?

Show Answer
Not a single player was selected in 2014, ending an over 75 year streak

Q. How many receivers were selected before Randy Moss in the 1998 NFL Draft?

Q. Which TE ran the 40 yard dash faster than all of the receivers in his draft class?

Q. There are a total of 7 officials during an NFL game. Which person is in charge of the officiating team?

Q. In 1982 which team’s rep turned in the wrong card, thus selecting a player they had intended to pass on.

Q. Which WR was not chosen in round one?