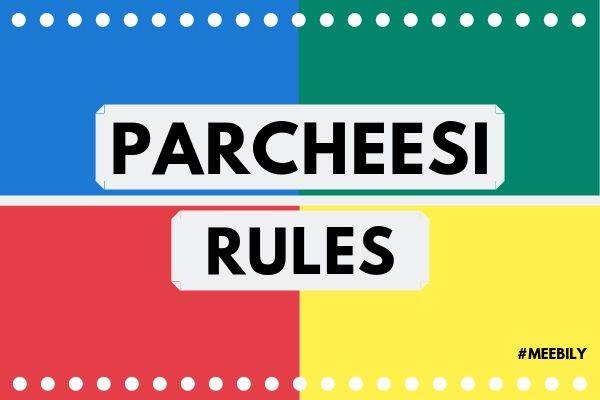 Have you ever found yourself thinking back to the good old days when you played different board games with your friends and never had a moment of boredom? Or maybe you’ve been stuck in an awkward situation when meeting your partner’s parents for the first time, wishing for something to distract them from evaluating you?

If you have played Ludo, then it won’t be difficult for you to understand Parcheesi rules. Parcheesi might be one of the games you played as a child or even as an adult. The interesting part about Parcheesi is that it can be played irrespective of your age. So regardless of how old you are, this game lets you be to act like a child for a little while. 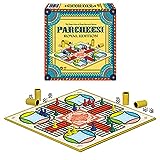 Parcheesi, also termed as the game of India, is a board game originated from India, under the name of Pachisi. The rights of the Parcheesi game was bought by Selchow and Righter in 1867 and they trademarked the game in 1874. Pachisi was originally played as two teams of two players per team each with their own color, with the two players from each team helping each other win. This added a new level of complexity and entertainment to the game. The American version of the game aka Parcheesi, however, is played by four people, all individually. An insight into the Parcheesi is that originally it was played on a piece of cloth with four different colored shells.

The Parcheesi game is played on a crossed board consisting of 68 squares among which 16 are the safe zones. Parcheesi is a game of 2-4 players where you can play in teams or even individually.

There are a lot of upsides to playing Parcheesi board games. Following are a few examples :

Although board games are fairly harmless, sometimes excessive playing can result in bad effects. For example:

The equipment is similar to that of Ludo or any traditional board game. To play Parcheesi you need three things

Hence only four people can play at one time as only four colors exist on the board. If the number of people is in the multiple of four, teams can also be formed to represent one color.

How to Setup a Parcheesi Game

To set up your Parcheesi game you will need to have the above equipment. Once you’ve bought the given equipment, it will be very easy for you to get started.

Now the game can begin by throwing the dice onto the board and moving the pawns if they are able to make out of the starting zone.

How to make a DIY Parcheesi game

Making a Parcheesi game is very easy and can be easily done at home. You need only a few things to make the Parcheesi game. Following is the step to step guide of making your own Parcheesi game!

Board Games to Create and Play: Invent 100s of games with friends and family
Check Price

The Objective of the Game

Each Pawn is moved in an anti-clockwise direction on the board until they finish by coming in the center from their respective zones. The goal of each player is to get all their pawns to the center as quickly as possible because the winner is the player who introduces all their four pieces in their respective final circle before any other player does.

How to Play Parcheesi Game

Parcheesi is a very straightforward game that is easy and fun to play. To get started you need to follow the next steps:

The New Complete Hoyle: The Authoritative Guide to the Official Rules of All Popular Games of Skill and Chance, Revised Edition
Check Price

Rules to Play Parcheesi Board Game

The detailed analysis of each stage and different rules are given below.

Start of the Game: The game begins when each player chooses their color. Any player can then start rolling the dice first and then the turns are rotated in either clockwise or anti-clockwise direction. The final call in deciding the turns goes to the players playing the game. At the start of the game, each player rolls the dice. The player who gets the highest value starts the game. Each player begins with their 4 pieces in their home circles. If you are playing with the start mode of the game, the game starts with one piece already on the board.

Piece movements: Another popular variant of the game required the players to roll the dice and bring up 6 on it in order to be allowed to move their pawns on the board. This can be done by a singular dice and if you are playing with two dice then you can roll in a combination, e.g. 2 & 4 and 3 & 3. If you roll two 6 then you can introduce two of your pieces on the starting point. In each turn, players roll the dice and move squares as dictated by the dice. It is up to the players to choose whichever piece they would want to move on the board.

Safe zones: There are certain points on the board called the safe zones. If your pawn is on these zones, no other opponent can send your pawn to the start. These usually occur at the point of starting of every color and also at the spot 5 boxes before that.

Winning the game: Once you are out on your starting point, your pawns are required to move through the whole board and return to the home square/circle. The same process is repeated by all four pawns to win the game. These were some basic Parcheesi rules. They will help you understand the variants if you want them to include to spice up the game. The winning depends on how quickly you will bring your all four pawns to the center of the board. The sooner you get them, the quicker you will win the game.

Although this game is highly dependent on luck there are still a few strategies that can be used to win the game. The numbers that appear on the dice are out of the player’s control but the movement of the pawn is still in the player’s control. The player should make sure to not only focus on getting their own pawn to the end but also on sending other players’ pawns back to the start. At the same time, players should make sure they stay as safe as they can from their opponents by creating doublet pieces and staying in safe zones.

The New Complete Hoyle: The Authoritative Guide to the Official Rules of All Popular Games of Skill and Chance, Revised Edition
Check Price

Parcheesi vs Pachisi vs Ludo vs Sorry vs Trouble

Pachisi: Pachisi is the Indian name of the game Parcheesi hence there is no difference between the two. They’re just different names of the same game. Although Pachisi was traditionally played on a cloth and played with shells of different colors instead of plastic pawns.

Ludo: Ludo is a game very similar to Parcheesi and is played on board as well with much of the same rules. Although the game looks different and is played with one die instead of two dice.

Sorry: Sorry is a board game involving 3 pawns. Instead of dice like used in Parcheesi, in sorry cards are used to decide what number you get. You pick up a card from a stack of cards that is provided with the game and whatever number is on that card is the number of spaces you move your pawn. These cards also come with special instructions on them.

Trouble: The game trouble also has four colors and four pawns per color. The board has protrusions that hold the pawns in place and help them move along. The dice is in a glass dome in the middle of the board. The players press down on the dome and then move their pawns according to that number till they reach the end.

Sorry! Board Game for Kids Ages 6 and Up; Classic...
Check Price

Variations of the Parcheesi Game

Parcheesi has many variations in the gameplay but some of these are popular worldwide. We’ll be discussing those now.

Two players can play with each player using two colors and eight pawns. The turns are for players and they can use the number they get to move any of their eight pawns, making the game interesting.

Teams of two with four players:

Four players can play in teams of two. Each player gets their own color and then two players from the same team help each other out to win. This adds an extra level of strategy and entertainment.

The size of the board:

The board may have more than 4 colors, which would allow a larger number of players to play the game. These variations vary from 3, 5 to 6 colors on one board at a time!

Online Parcheesi games to be played

There are multiple games available on Apple play and Google play that can be used for playing Parcheesi. Following are certain examples:

This game is easy to play and you can play with players from all around the world which makes it convenient to play if you’re alone and your friends aren’t free. The game allows you to customize your avatar for the game, you can choose its appearance and clothing. You can also play offline using this app. However, you don’t have the choice to choose how many people you can play against.

You can link the app to your Facebook account to be able to play with your friends, or you can even play as a guest if you don’t want to link your account. The app allows you to choose if you want to have a one on one game, or team up or have a four-player game. There is also an option to play offline in this app which is great if you’re bored on a train or bus ride!

In this app, you’re given the option to either play online with players from around the world or play immediately, with a computer. You can also choose the level of difficulty from three categories, easy; medium or hard. This will be helpful to you if you’re new to playing this game. This app is great to pass time and have fun while also being light on your phone’s storage.

Parcheesi is a very engaging game that can be used in any sort of setting with any kind of people and it will be an enjoyable experience for all. Whether you win or lose, whatever the results are going to be, we do guarantee you the unlimited fun for straight four to five hours and sometimes even more than that if you follow some strategic play!