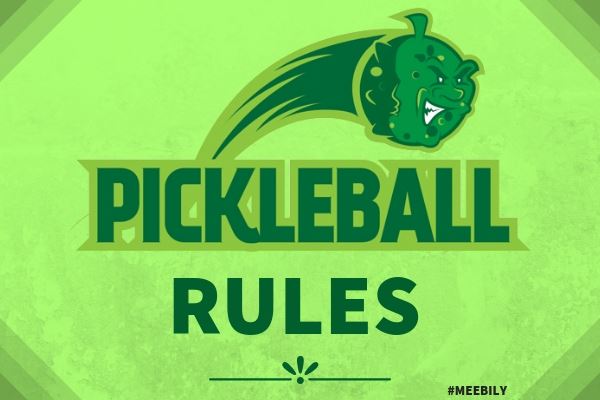 There are many outdoor games but not every game determines the inclusion of all members of a family. Keeping the need in mind, Pickleball was developed. The interesting part about this game is that pickleball rules are the simplest and most of them are either an adaption from tennis, badminton and ping pong or their modification. Rumors say that the game has been named pickleball because it’s a combination of three other games, just like pickle is a combination of various food products.

Talking about the pickleball rules, they are also published by the International Federation of Pickleball. The federation is quite particular about their rules and demands them to be followed in a sanctioned tournament. However, people do modify them according to their ease in an unauthorized tournament.

Check Out: Spikeball Rules: How to Play Spikeball

The court layout is primarily focused on the format of pickleball federation guidelines. It is made in dimensions of a badminton court (20 feet 40 feet) which makes it one-third of the tennis’ court. A net of about 36 inches hangs in the center to divide the court in two. The playing area of the game is divided into two rectangles of 33 feet-wide and 60 feet-long. Few changes can be made into this. At each end of the court are the baselines while sidelines are drawn a perpendicular to the net. No-volley-zone, a seven-foot area on either side of the court is marked to take away the opportunities of smashes and drop shots making the game all more contingent. Centerlines bisect the area between two non-volley zones and this allows the demarcation of service courts on either side of centerlines, to follow the pickleball rules.

Just like badminton and tennis, pickleball can be played both in singles as well as doubles. However, in both games, the pickleball rules remain the same. The game begins with the serve. The ball is served diagonally to the opponent’s court, with careful handling that it doesn’t bounce on the ground. The scoring is a tricky part. The serving side gets the point only when an opponent fails to either revert or bounce the ball out of the boundary. The ball continues to alter until someone faults. Following the serve, the bouncing rules change. Each side must bounce the ball, at least one-ground stroke (if not many), is required before it has bounced. Lastly, no player can volley a ball, while being present at the non-volley zone.

A player with 11 points wins the game if they are leading with two points. Hence, winning requires the players to be 2-points ahead of their opponent.

It depends on the players when the matter comes on who shall serve. Teams often do a toss (more like a rally) by bouncing the ball over the net for three times, before it is on one court. But one of the team can start on its own, without a toss, if everyone agrees. A player or the team serving the first gets only one serve, then. The server shall announce the scores as 0,0,2 while the points are 0,0. The server gets the 2 points in the beginning because they will have only one serve in the game. This pickleball rule is the one the significant rules because it lets the game go on smoothly and prevents one team from getting a bulk of points to start. When the serve switches to the other side, then that team gets the chance of two serves and game continues until one of the teams get 11 points.

To ensure the best game, Pickleball has a two bounce rule. The rule states that the receiving team must let the ball bounce twice when a ball is served. And once the ball has once bounced in the courts of both teams, they are then allowed to hit the ball without bouncing it, and this in pickleball rule book is termed as a volley. Two-ball rule is followed to eliminate the serves, extending the rallies.

Like another game, pickleball also relies on the integrity of the players calling lines in or out. The pickleball rule suggests that players shall call all the lines honestly. A ball contacting any line except the non-volley on a serve is considered in. A serve contacting the non-volley zone is a fault. If a team cannot decide a call the opponent is benefited.

Faults are a way of earning points. The ball that hits the boundary or outside of the court is a fault. Likewise, the ball hitting a player is the fault. Catching a ball that is outside the court is also considered out. If a ball hits onto the wrong court when it is served, and the opposing team catches it, then this is a fault for receiving the team. The receiving team earns a point in the result of serve’s loss or if it sides out while a fault by receiving team gives a point to the servers.

Pickleball scoring rules are quite easy but beginners find it confusing. Firstly, the serving team is responsible to announce the scores. Games are played till 11 points but a tournament 15 or 21.

Any player standing in the right-side of the court is considered as server number 1. The server’s scores are announced first, followed by an opponent and then the third server. So, 4,5,1 would mean that the serving team has 4 points, the opponent has 5 while the server number 1 is serving.

If a server gets one fault, they lose their serve and have only one chance to get back their serve.