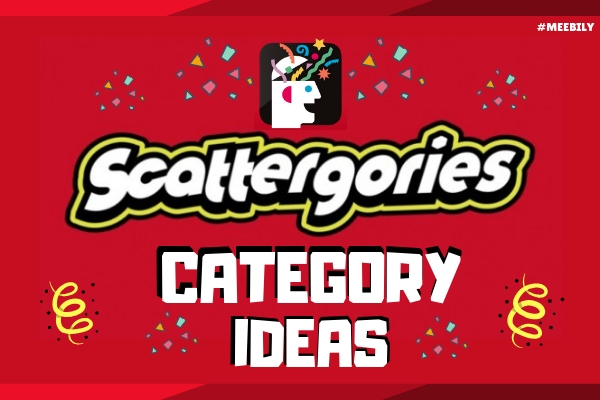 Scattergories is a game of wit and valor. You have to not only know a great number of words from the English language, but you also need to know things about the world that most people don’t. But the key to succeeding in this game is knowing how to use your knowledge, not how much of it you have. With the right use of your, no matter limited or unlimited knowledge, you can succeed at this game without much effort.

The game is based on a traditional game known as Tutti Frutti, Jeu du Baccalauréat, Stadt Land Fluss, and many other names but its sale officially started in 1988 by the Parker Brothers. Talking about Scattergories Categories, the list is unlimited.

Scattergories can be played by kids and adults and can be enjoyed by both as well. Scattergories Categories ideas can range from anything, from science to television series, from geography to food items. Literally, anything that you can think of. Scattergories is just the right game to test your vast vocabulary about these topics.

The objective of the game is to quickly fill out the answer list relating to each category, starting with the specified letter. You will only get points for what you write down if it differs from what other participants write down, so try to use diverse and uncommon words to get the highest possible score and win the game!

Scattergories Categories - A Fun Twist on the...
Check Price

How to Play Scattergories Game

How to Setup a Scattergories

Setting up the Scattergories Game board is fairly straightforward. You only need to follow the given below three steps to set up your game and have it ready to be played in no time.

Rules to Play the Scattergories Game

The following steps will highlight the gameplay for Scattergories Game, follow these rules and we guarantee you a great time!

While playing the game, you will have to follow certain rules to determine what answers are acceptable and which ones cannot be counted for points. The list below gives an outline of such rules, but you and your fellow players can always come up with rules of your own to avoid confusion and quarrels.

How to Create Scattergories Categories Game

If you do not want to spend money on time waiting for your Scattergories Game box to show up, you can always create the game for yourself at home. The following steps will show you exactly how to do this in a quick and easy fashion!

How to Win at Scattergories Categories Game

Winning a game like Scattergories requires both skill and luck. But by using your brain and being mindful of a few common mistakes, you can make your own luck. Keep the following tips in mind when you play the game with your friends next time and you will surely get the highest score possible!

The Game of Scattergories
Check Price

Scattergories is a very famous game worldwide and over the years people have created their own variations of the game to be played by their own rules and according to their likes. These are listed below:

This is the game that Scattergories stemmed from. For this game, you only need a number of papers and pencils equal to the number of players, instead of a big box with multiple pieces of equipment. Each player has to draw a five into five grid on their piece of paper. The players can then mutually decide on five categories to put along all the columns, vertically, on one side, outside of the grid. One of the chosen players can decide on a five-letter word to place on top of the grid, along the rows, horizontally. This should also be placed outside the grid. The whole five into five grid should be left empty to fill in with words corresponding to the category and letter associated with each box. The players can decide on a time limit like five or ten minutes and everyone should complete their own grids in that time limit. The players can use any technique they like to choose which players get to decide on the word, categories and time limit. The same method as a Scattergories Game can be used to score and determine the winner.

This game is an easier variation of the Scattergories Game. In this version, the categories are already decided. Each player is handed a piece of paper and a pencil, on which each must draw five columns with each headed by Name, Place, Animal, Thing, and Total. To decide on what letter to use as the key letter for each round, one of the players can sing the alphabet in their heads without saying it out loud till you tell them to stop and the letter they stop at can be used as the key letter. As soon as the key letter is said out loud, all the players have to start filling up their page, they are only required to write one answer for each category. The first player that finishes than starts a countdown from ten for the other players. The other players have to finish up their game before the countdown ends. After everyone is done, the scores can be finalized. In this version, however, instead of each acceptable entry having one point, it has ten points. The number of points that each player scores in a round can be jotted down in the total column. As many rounds as the players want can be played, till you run out of paper or alphabets of course!

TuttiFrutti: this app truly captures the essence of the Name Place Animal Thing Game. It provides you with the categories and a key letter with two rounds of gameplay. However, it does not show the scores at the end and you do not compete against other players. You’re basically playing against yourself. The app has a rating of 3.1 on the app store and while it will only take up 11MB of space in your phone.

Fight List: this app allows you to write down as many words as you want for a specific category and then assigns your scores according to that. It’s a variation of the Scattergories Game and you only play with one category, and no keywords. This app is fairly easy to use and you can compete with your friends by linking the game to your Facebook account. There are no ad interruptions while around is going on, the ads are only displayed after the round is over.

Scattergories Blitz: this app allows you to name as many words as possible in a specific category and lets you play with a friend as well as strangers if you choose not to link your social media with the app. This app takes up more space but provides similar services as the Fight List app, however, the number of ads in this app is relatively lower. This app also gives you a cheat sheet at the end so it can help you learn words for later games that you might play with your friends.

Planning to host a party or inviting friends up for Halloween/ Christmas, these Scattergories Categories ideas are here to light up your party.