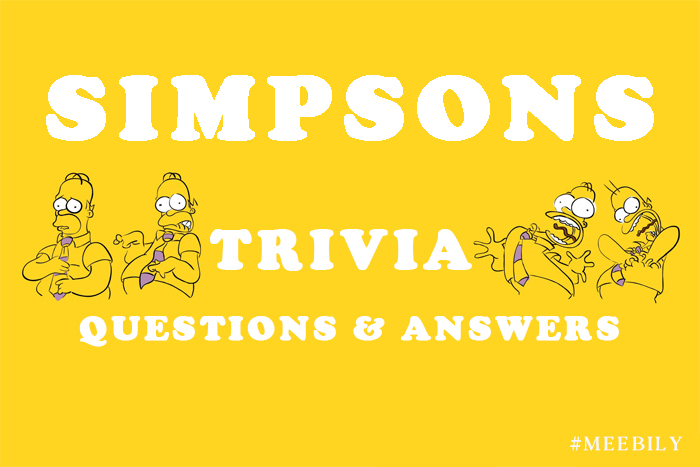 The longest-running American animated sitcom created by Matt Groening and broadcasted by Fox Broadcasting Company exhibits an excellent depiction of an American working-class family named “The Simpsons Family”. Its main characters include Homer (Husband), Marge (Homer’s Wife), Bart, Lisa and Maggie (Homer’s and Marge’s Children). One of the most popular video games besides The Simpson’s Series and The Simpson’s Movie is “The Simpsons Ride” and “The Simpsons Movie”. Along with some engaging video games, many Simpsons’ comics, commercials, and books are available worldwide ready to get shopped by Simpsons’ fans. The Simpsons Trivia questions and answers activity can be an amusing thing to do for your 2018 Simpsons parties and events.

Q. What is the original name of Hans Moleman’s character?

Q. What name did the clown on Channel 6 have?

Q. What name does Lisa’s jazz mentor have?

Q. Name the one who runs the Kwik-E-Mart?

Q. In the Itchy & Scratchy & Poochie show who provided the voice for Poochie character?

Q. Who was the driver of the school bus?

Q. Bart has a pet elephant. What name did he give to that pet?

Q. Whose first name is Clancey?

Q. What is the name of Homer’s brother’s?

Q. What is the name of Marge’s maiden?

Q. Who is Bart’s favorite action hero from the comic book?

Q. Whose middle name is under dunk?

Q. What is the name of the famous person Marge love to paint?

Q. What was the name of the Plow King?

Q. Name the guy at the comic book store.

Q. Who is the owner of the Kwik-E-Mart?

Q. Name the one who created Itchy (the cartoon character)

Q. What is the name of Mr. Burns’ assistant?

Q. Name the two carnies that took over the Simpsons’ home?

Q. What was the name of the person who replaced Otto in A Streetcar (Desire)?

Q. What is the first name of grandma’s Bouvier?

Q. What is the name of the head of itchy and scratchy?

Q. What is the name of the one who played happy birthday for Mr. Burns?

Q. What is the name of the one who is with Japanese restaurant owner in the car?

Q. What is the name of Homer and Marge high school principle?

Q. What is name of the Krusty’s secretary?

Q. What is the name of Milhouse’s first girlfriend?

Q. Name the person who practices medicine without having a license?

Q. What is the real name of cat burglar?

Q. What is Homer’s boss name?

Q. Who is Bart’s best friend?

Q. What is Simpsons’ cat name?

Q. What is the name of the one who ran over Snowball I?

Q. Whose wife name was Brandine?

Q. What is the name of Groundskeeper Willy’s enemy?

Q. Apu belongs to which country?

Q. Name the town where the Simpsons reside.

Q. Who was the one to find Simpsons’ town?

Q. What property does Poindextrose chemical had?

Q. Why did Human Fly stayed up all night?

Show Answer
To dye their underwear

Q. After Mrs. Krebappel put personal ad in the paper that was the one to become her first date?

Q. What was the homers ”fourth child” name?

Q. In which bar does Homer drinks?

Q. Which pet did Simpsons get on their first Christmas?

Q. In the opening credits what does the Bart mostly do?

Show Answer
Write on the blackboard

Q. What name does the minister at the First Church of Springfield have?

Q. What does marge hide in her hair?

Q. The people who bought the power plant from Mr. Burns belonged to what nationality?

Q. To whom does Bobo (teddy bear) belong?

Q. What gift did Marge receive from Homer on her 34th birthday?

Q. Who smuggle a bag of potato chips on board?

Q. Who replace Chief Wiggum in the Be Sharps?

Q. Happy Little Elves are the favorite cartoon characters of whom?

Q. For how many days Marge was kept in prison when she was caught shoplifting?

Q. Whose sidekick is Fallout Boy?

Q. From where did Lisa was banned for three months?

Q. Which Simpsons’ episode aired in the U.S for the first time?

Q. To whom Lyle Lanley sold a defective monorail system?

Q. Where do Bumblebee stars?

Q. From which realty firm did Homer and Marge buy their house?

Q. In Where did Marge and Artie Ziff go?

Q. The Flaming Moe was invented by whom?

Q. How many seasons of Simpsons are there?

Q. Who lives in the Simpsons’ neighbours?

Q. Why did homer ring President Clinton and NASA?

Show Answer
To get some tang

Q. In order to celebrate what did Shelbyville drink Turnip juice?

Q. In which country Kwik-E-Mart headquarters are located?

Q. Why was Homer sent to a mental institution?

Q. What day was the happiest of Ralph’s life?

Q. Whose voice was recorded for Homer in Bart’s Internet cartoon, Angry Dad?

Q. How many members is part of Homer’s family?

Q. Who is the creator of Simpson?

Q. Who is Arthur Crandell?

Q. According to Nelson what Bart was showing?

Q. Instead of Lincoln What statue does the town bought?

Q. At what time Bingo start the church mostly?

Q. What was Ned Flanders’ profession before opening the leftorium?

Q. Which famous star does Selma and Patty’s likes a lot?

Q. What were the first words young Bart?

Q. In the whacking day episode which instrument did Lisa played?

Q. From where does Homer and Marge bought things for their dinner party?

Show Answer
How the dogs talk on the beer commercial

Q. Next to the candy convention what was placed in the room?

Q. In the magazines that Lisa read how many boys had the name “Corey”?

Q. Who said this statement’ ‘such a nice day. I think I’ll go out the window.’’

Q. At what age did Bart saw the Itchy & Scratchy movie?

Q. What was the name of the Marge’s inmate prison?

Q. What did Bart and Lisa found while digging?

Q. In ‘Bart vs. Australia’ What did the Bart wrote on his butt?

Show Answer
Don’t Tread On Me

Q. How is the Japanese flu cured?

Q. What number does license plate had?