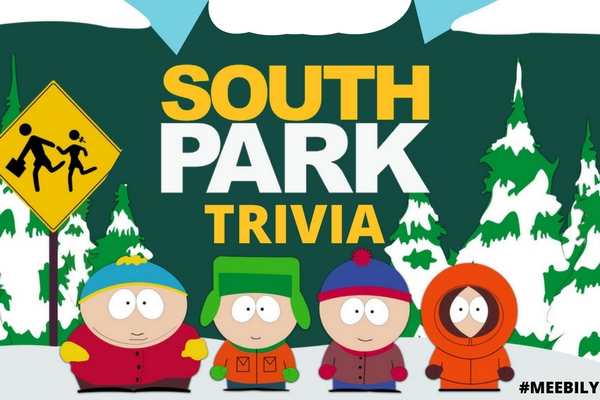 There are times when you feel like going back in time and re-live your childhood memories. Those times with fantasies, animations, love for cartoons, and relating yourself to those stories can never be forgotten. But guess what? Animations aren’t just for kids. South Park is a top-rated animated adult sitcom produced, written and developed by Trey Parker. With a total of 21 seasons and over 280 episodes, this animated sitcom has been a top hit ever since it been on the air. The show is about four boys who live in a fictional small town of South Park which is actually located in the real-life South Park basin in Colorado.

Who would have thought of creating an animated sitcom for adults? The conceptualization of the TV show brought diversity in the genre of the adult sitcoms. Even though the episodes are based on real-life characters too but the sitcom, South Park, is an entirely fictional television show. To add in more excitement and fun, we have designed this amazing South Park trivia questions & answers quiz worksheet. With a blend of adventure and fun, our compilation of South Park trivia questions makes it a fantastic family and friends feud game. But before heading on to taking the challenge make sure to prepare yourself. So, brace yourself, buckle up, and get ready for the South Park Trivia quiz game!!!

10 Most Amazing Facts you didn’t Know about South Park:

Q. What was the name of the couple who won the vacation in the episode “Cow Days”?

Q. Which song is not a song on Faith + 1’s album in the episode “Christian Rock Hard”?

Show Answer
Lord, What a Day.

Q. What does Stan’s father do professionally?

Q. What is Kyle’s and Cartman’s blood type?

Q. The first South Park episode to be on air was?

Q. What is Jesus’s house number, where he resides?

Q. “Oh my God, Someone killed Kenny” was written in Spanish above Mr. Garrison’s blackboard in which episode?

Q. Which substitute teacher did Wendy want to get rid of and eventually did?

Q. Was Cartman given a pinkeye by?

Q. What character gets eliminated from the best friend search by Cartman during a baseball game?

Q. Where do Cartman and Butters go in the episode “Awsemo-o”?

Q. Whose first name in the sitcom is Veronica?

Q. In which episode is it revealed that Cartman’s mom is a hermaphrodite?

Q. What does Towelie like to do the most?

Q. What do you have to be in order to join NASCAR, according to Cartman?

Q. What are the names of the queef sisters?

Q. How many words can Timmy say?

Q. Who fixed the internet in the sitcom?

Q. How was the internet fixed by Kyle?

Q. What was the name of the kid who sold steroids to Jimmy?

Q. Among the group, Kyle is basically a?

Q. In the group, Stan is portrayed as?

Q. Where do the four main boys (Stan, Kyle, Eric, and Kenny) live?

Q. The character of Stan is modeled after whom in real life?

Q. The character of Kyle is based on?

Q. Out of all, which character has a poor family?

Q. Which one of the four boys died in almost every episode before returning in the next?

Q. In the first 58 episodes, the four boys were in which grade?

Q. Who does Mr. Hat spring from prison in the episode “Chef Aid”?

Q. What is the color of Kenny’s gloves?

Q. What is the name of Eric Cartman’s mother?

Q. The name of the only black member in the group of the four boys in the series is?

Q. The most prominent female character name who is also Stan’s girlfriend in the series, is?

Q. Who is always trying to kill himself?

Q. Which character wears an orange parka most of the time?

Q. Bebe Stevens was voiced by two people, what were their names?

Q. What were the names of Token Black’s parents?

Q. Is Stan Marsh basically a?

Q. What was the name of Kyle Broflovski parents?

Q. Sheila Broflovski was voiced by?

Q. Sheila Broflovski was basically a?

Q. Jimbo Kearn was played by?