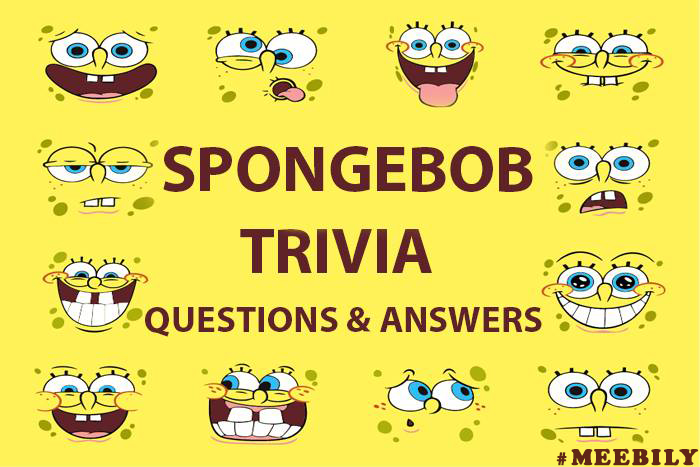 A humanly attributed cartoon character who came into existence by an actual marine biologist, having the longest-running Nickelodeon series record and the fifth highest-grossing animated TV adaptation originally named as “SpongeBob” and popularly known as “SpongeBob” among kids and teens. Ever met a kid who doesn’t love SpongeBob? We don’t think so! The downloadable trivia questions and answers worksheet will make your SpongeBob themed parties more entertaining and fun for you and your invited guests for sure. In fact, the SpongeBob Trivia quiz will be a cherry on top of SpongeBob themed family get-togethers.

Q. What color are SpongeBob’s eyes?

Q. With whom SpongeBob lives?

Q. What is the color of necktie that SpongeBob usually wears?

Q. What color are SpongeBob’s shoes?

Q. Where does SpongeBob works?

Q. What is the name of the street on which SpongeBob lives on?

Q. What shape are SpongeBob’s pants?

Q. What type of personality that SpongeBob possess?

Q. Which of the two things that SpongeBob is really afraid of?

Q. Where does SpongeBob lives?

Q. What type of house does SpongeBob lives in?

Q. At work, SpongeBob has what title?

Q. When SpongeBob is at work at Krusty Krab, what does he wear as a uniform?

Show Answer
A tall white hat with a small blue anchor on it.

Q. According to the opening song, what is SpongeBob?

Q. What is the name of SpongeBob’s pet snail?

Q. SpongeBob is the biggest fan of which one of the following?

Q. What is SpongeBob and Patrick’s favorite thing to do?

Q. In the episode ”Squidville” where does Squidward move to?

Q. Who is Squidward Tentacles?

Q. Who is Patrick Star?

Q. Who is Sandy Cheeks?

Q. Who is Patrick’s sister?

Q. What is the relation of Patrick and Gary?

Q. Is Squidward a Squid?

Show Answer
No, Sqidward is not a Squid. He is actually an Octopus.

Q. Since Squidward is an Octopus so how many tentacles does he have?

Show Answer
Squidward has six tentacles instead of eight as he looked too overburdened with eight tentacles.

Q. How much does Patrick weighs?

Q. Granny’s voice over was done by whom?

Q. Who has done Jack Kahuna Laguna’s voice over?

Q. What in actual is Krusty Krab?

Q. What kind of house does SquidWard lives in?

Q. What is the name of SpongeBob’s best buddy?

Q. What was Krusty Krab initially known as?

Show Answer
Rust Krab. It was a nursing home before Mr. Krabs brought it.

Q. What is the only episode where Larry the Lobster is referred to as ”Big Larry”?

Q. In ”SB-129”, how many letters does Sponge-Tron say there are in the alphabet?

Q. Often when Patrick is laughing really crazy or saying/doing something really dumb, how many upper teeth is he shown to have?

Q. In ”The Main Drain”, what two characters originally pull the drain, sucking in the entire ocean?

Q. What was Patchy’s new persona during the marathon?

Q. How far away from the Krusty Krab does Patrick live?

Q. In the episode ”The Great Snail Race”, what is the name of the snail Squidward buys?

Q. How many spots does Squidward have on his forehead?

Q. What is the first episode of ”SpongeBob SquarePants” titled?

Q. What is the name of Plankton’s pet in the episode ”Plankton’s Pet”?

Q. After 12 years, Bubble Bass made an appearance in which episode?

Q. Which celebrity once said that SpongeBob is his favorite TV character?

Q. Which actress played a recurring role on the show between 2010 and 2011 as Grandma SquarePants?

Q. What is the episode when SpongeBob is stepping on toy ducks?

Q. What is the title of the episode where SpongeBob and Patrick find themselves in the dark ages?

Q. In the start of the episode ”Rock Bottom”, where have SpongeBob and Patrick just come from?

Q. In ”I was a Teenage Gary”, who gives Gary his snail plasma?

Q. In what episode did SpongeBob call Mr. Krabs a ”crustaceous cheapskate” for the first time?

Q. What instrument does SquidWard play?

Q. Which of Sandy’s pets turned into the ”monster” that sent Bikini Bottom into a panic?

Q. What is the name of Mr. Krabs’ daughter?

Q. Who does the voice of Patrick?

Q. Who wins the snail race?

Q. When SpongeBob and Patrick become entrepreneurs, what do they decide to sell?

Q. Which episode of the show had Larry’s first appearance?

Q. Who is Larry’s step-father?

Q. What is the name of the beach that Larry usually goes to?

Q. Larry once suffered from bad armpit odor. What was causing it?