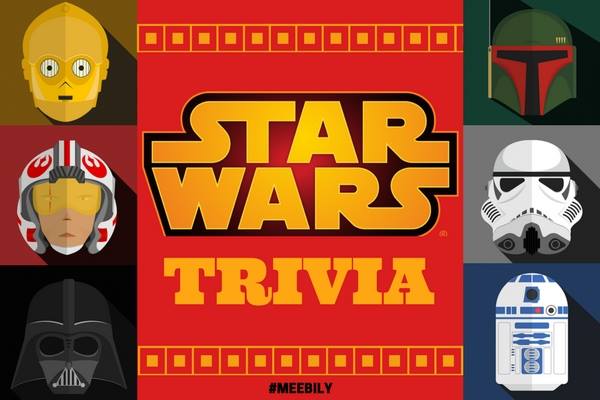 Star Wars franchise has been hugely popular throughout the past few decades and its craze seems unending.

This page is dedicated to those loyal fans of STAR WARS who want to know every detail about the STAR WARS movies, all the seven parts. Get ready for some serious STAR WARS TRIVIA QUESTIONS AND FACTS we have gathered to light up your heads.

Do you know the actor who lost millions of dollars on a bet with STAR WARS? Or do you have any idea what happened on the sets? All these mystery questions will be answered below. So keep on reading!

At the end of the trivia questions, we also have summed up some of the best STAR WARS trivia products/games that you can play with your family and have a good time.

27 Facts one should know about “STAR WARS”:

Before moving on to the fun and interesting trivia questions, let’s cover up some facts that you guys probably are not familiar with STAR WARS. Now some of the facts may come to you as a shocker and others as not so shocking!

Now that was a mouthful of random STAR WARS TRIVIA FACTS. Let’s move on to the real STAR WARS trivia questions you can ask your friends and check their level of STAR WARNESS!!!

Q. What is the name of Han Solo’s ship?

Q. What is the weapon used by Jedi Knights?

Q. Who is Han Solo’s loyal friend and first mate?

Q. What is the name of Luke and Leia’s mother?

Q. How many members are there in the Jedi Council?

Show Answer
Because he lacked patience In the Star Wars film.

Q. What invisible power binds the galaxy together?

Q. Who are the masters of the Dark Side who want to rule the galaxy?

The next list of TRIVIA QUESTIONS is for the fans who call themselves as an “EXPERT” in star wars.

Q. Who wrote the score to all six movies?

Q. Who purchased the Star Wars franchise in 2012?

Q. Who is the creator of Star Wars?

Q. What is the name of Luke Skywalker’s mother?

Q. What was the name of Luke Skywalker’s uncle?

Q. What was the name of Han Solo’s ship?

Q. What type of spacecraft does Luke Skywalker fly?

Q. What type of creatures live in tree houses in Return of the Jedi?

Q. What type of creatures live in sandcrawlers and scavenge old machinery?

Q. What type of creature is Chewbacca?

Q. What organization is the enemy of the Jedi?

Q. Which Mel Brooks movie was a spoof of Star Wars?

Q. What is the traditional weapon of the Jedi?

Show Answer
Revenge of the Sith.

Q. What is the name of Jango Fett’s son?

Q. On what forest moon do the above creatures live on?

Q. What character had a “double” lightsaber?

Q. Which character becomes the Emperor?

Q. What character was a parody of Jabba the Hut?

Q. Name the star wars movie which was filmed entirely in the studio?

Q. What is the color of Mace Windu’s Lightsaber?

Q. In the edition of The Star Wars Holiday Special which Star Wars character made the first appearance?

Q. Which actor pulled out of Episode III: Revenge of the Sith when he discovered that non-union actors were being used in the film and why?

Show Answer
Gary Oldman pulled out of the film because it was being made using actors who were not part of the Screen Actors Guild, of which Oldman was a member.

Q. Which character did George Lucas considered of making a midget?

Q. How many languages can C-3PO speak?

Q. In episode VI of the star wars, which animal sounds is used as the growl of The Rancor in Jabba’s Palace?

Q. Which American-English puppeteer gave the voice of Yoda?

Q. What is the first phrase spoken by yoda in episode 1?

Show Answer
Cold, are you?

Q. Who is saved from the clones by a Jedi in episode III?

Q. Who is the telepath in Jedi Council?

Q. What is the name of the member of Jedi council who has a long neck?

Q. Does yoda has a sister?

Q. True or False, Mustafar was mentioned in Episode II?

Show Answer
False, he was mentioned only in Episode III; Revenge of the Sith.

Show Answer
Boba Fett had inherited this attack craft from his father.

That is all we have from the Star Wars family. Hope the already Star Wars fan got an increase in their knowledge and the ones who weren’t a fan are now definitely a BIG FAN!