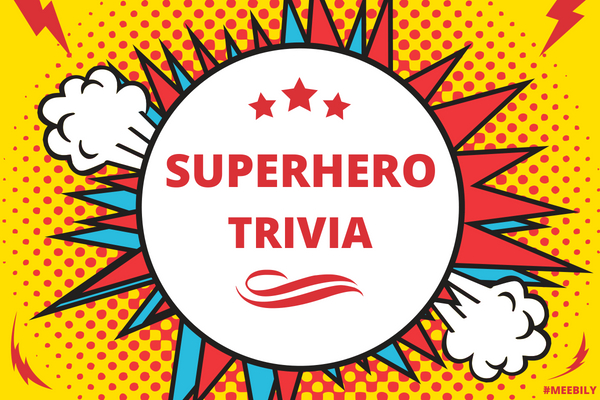 Everyone is familiar with the word SUPERHERO!!! Well, how couldn’t one be? Ever since a child is born, he is told stories of superheroes and how they save people and help others. Toys to play and Movies children prefer to watch usually revolve around super-heroes.

So, children develop an image of superheroes as the most potent, sympathetic, kindhearted, and prevailing beings who can do whatever they want. Some of the most popular and recognized superheroes are Batman, Spiderman, Superman, Hulk, Wolverine, and Iron Man.

The word superheroes date back to at least 1917. That was the first time someone used this name for fictional characters, and since then there have been numerous superheroes introduced. We aim to evaluate your Superhero knowledge with our compilation of Superhero trivia questions & answers quiz. 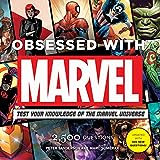 Even though the origin and idea of the superhero is a fictional character dates back to 1917 but they are still quite common among, well, everyone!!! We believe a true superhero fan will certainly score high on our thrilling Superhero trivia questions & answers quiz game.

I’m quite sure that you are a fan of some superhero too!!! If you are really into superheroes too than you have certainly landed in the right place. So, don’t wait any longer and start taking the quiz.

A superhero is someone who possess extra ordinary qualitites and is able to perform herioc tasks. Superman, Spiderman, Batman, Captain America, Iron Man, Thor, Hulk and Wonder woman are few examples of the superheros that are equally loved by kids and adults.

Q. Which planet is Superman from?

Q. What is the name of Batman’s secret identity?

Q. Daredevil, aka Matt Murdock, is a superhero with what physical challenge?

Show Answer
He is blind.

Q. Which villain was elected as the president of the United States?

Q. What is Batman Incorporated?

Q. Who is Clark Kent?

Q. Who is Bruce Wayne?

Q. Who is Peter Parker?

Q. Who is Bruce Banner?

Q. Who is Selena Kyle?

Q. If Mr. Freeze attacked, which superhero would you call?

Q. Which character is not a member of the Fantastic Four?

Q. Which superhero is the twin brother of the Scarlet Witch?

Q. What is Superman’s only weakness?

Q. How did Spiderman get his superpowers?

Q. In the movie Anchorman, Ron Burgundy says that which superhero was denied a bank loan?

Q. In superhero Wolverine’s history, the indestructible element ma–ium was bonded to his skeleton.

Q. Besides Jerry Siegel, who created the Superman character in the 1930s?

Q. When Billy Batson says which word, he turns into superhero Captain Marvel?

Q. What is the name of Wonder Woman’s mother?

Q. Who is the Dark Knight?

Q. Who grew up in Smallville?

Q. Who has radioactive blood?

Q. Who has the Lasso of Truth?

Q. What is another name for Superman?

Show Answer
The Man of Steel.

Q. Who is the one person who can calm The Hulk down?

Q. Which villain did Jim Carrey play in Batman Forever?

Q. Who played Superman in the original 1978 Superman movie?

Q. Which superhero was doused with hazardous waste, causing him to go blind?

Q. Which superhero flicks does not have a sequel planned?

Q. Which character is often romantically paired with Batman?

Q. Which superhero is nicknamed the ”Scarlet Speedster”?

Q. Which superhero gains his power from a ring?

Q. What is the name of Wonder Woman’s mother?

Q. What is Batman Incorporated?

Q. Which superhero lost his father in a plane crash at an early age?

Q. Which superhero was created by Jack Kirby and Joe Simon?

A DC Universe Superhero who is friends with Batman and Wonder Woman is none other than Superman! Being born in an alien world which resembles human as well, Superman is blessed with super powers that none other Superhero possess. While working as a newspaper journalist, Clark realized his super powers. If Clark senses danger nearby, he instantly converts into Superman. The initial of “S” on Superman’s chest indicates that he is “The Superman” of all times.

Q. State the count of basic colors of Kryptonite

Q. Name the object that Superman is holding on the cover of Action Comics 01

Q. What is Superman’s birth name?

Q. Who is considered to be Superman’s first Super Villian?

Q. Name the color of Kryptonite that is only harmful to Bizarro creatures

Q. Name the newspaper in which Clark work

Q. Name the color of Kryptonite that can permanently rob Superman’s super powers.

Q. Where does Clark Kent work?

Q. What color of Kryptonite is not harmful to Superman?

Creation of Bob Kane and Bill Finger, Batman is one of the most powerful superhero of DC comics. The secret identity of Batman is Bruce Wayne. Batman’s parents (Dr. Thomas Wayne and Martha Wayne) were brutally murdered by a city mugger named Joe Chill. Witnessing such harsh life tragedy, Bruce Wayne trained himself to utmost physical and mental perfection level which made him the Batman which we know today.

Q. Name the person who portrays the Scare Crow

Q. Name the actress who played Batgirl in Batman and Robin

Q. Name the director of “The Batman Returns”.

Q. Who was Batman’s Butler?

Q. Do you know the real name of Catwoman?

Q. Name the character who played The Joker in the movie

Q. Name the rare disease of Batman and Robin

Q. What is the name of Batman’s pet?

Q. What is the name of Barbara’s father?

Q. Name the creator of Batman

Q. What is the color of Batphone?

Q. Name the writer who once made a cameo as Ballpoint Baxter

Q. Name the person who portrayed the Penguin?

Q. Name someone who played the role of Commissioner Gordon

A high school student named Peter Benjamin Parker, accidentally gained superhero spider-like abilities to defeat crime in New York city. The strength, wall adherence superpower and spider like speed was acquired by Peter Parker when he was bitten by a spider and became the Spider man which we know today.

Q. Name the creator of Spiderman

Q. Name the comic book in which Spiderman first appeared

Q. Name the first super villain that Spider-man ever encountered

Q. Name something which Spider-man bring home from Secret Wars

Q. Name the actor who played Spider-Man in 1977 TV series

Q. Name the Spider-Man villain who dresses and acts like a 1920 gangster

Q. Name the Spider Man villain who was the son of the Kingpin

Q. Name Spider man villain who is the CEO of Fireheart Enterprise

Q. Name the primary location of the movie

Q. Name the person who first discovered that Peter Parker is Spider Man

Q. Who made the suit which Peter wore for most of the movie scenes?

Following are the list of the most popular superhero comics apps on the basis of most downloads on google play store:

Introducing the MARVEL COMICS app on Android, featuring the world’s most loved super heroes! You can download numerous of comic books featuring your favorite superhero characters like including Iron Man, Thor, Captain America, Spider-Man, Wolverine and more. The app can be accessed on your mobile device or tablet with the touch of a button.