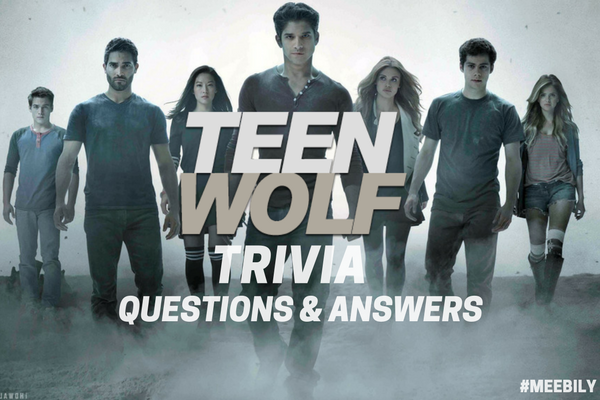 Teen Wolf is an American TV series which was initially progressed by Jeff Davis. It is a multiple genre television series. Being a mix of horror, comedy-drama, romance and action, Teen Wolf has always been a top-rated television series, both for teens and adults. We have managed to compile a comprehensive list of Teen Wolf Trivia Questions & Answers that serve as an addictive quiz game.

With huge success coming its way, all of its six seasons combined have a tally of over a hundred episodes that have been already been aired. Obviously, who wouldn’t love a mix of some drama, comedy and some thrill?

Are you a huge fan of this hit Werewolf TV series too? Well, we thought so, which is why we have accumulated this downloadable and exciting Teen Wolf trivia questions and answers quiz which will certainly develop your interest in the series even more. For all those die hard Teen Wolf fans, this trivia quiz game worksheet is definitely something to relish. So, get a chance to explore, dig deep into the mysteries and find out the minor details which you probably missed while watching. Let’s see how big fan you really are!!!

Q. What was the name of the second episode of season 1 on the famous television series Teen Wolf?

Q. Which body part of Derek’s sister did Scott find?

Q. What was the color of the liquid inside the bullet, Derek got shot with?

Q. According to Derek, Wendigos were described as?

Q. Who was Malia Hale?

Q. Last person, to forget that Stiles ever existed was?

Q. Which type of supernatural creature was Mr. Douglas?

Q. Wild Hunt disappeared the Citizens of Cannan on?

Q. Who is Stile’s crush among the girls?

Q. Even though in Season 3 it was revealed which supernatural creature Lydia was but even before that in Season 2, Jennifer Blake identified Lydia as?

Q. In the episode Illuminated, who was the person who helped Kira access her mobile phone while she was at the police station?

Q. After Doctor Valack got a little information from Lydia, it was finally revealed that Theo let his sister die because?

Show Answer
He needed her heart to be a generic chimera

Q. How was the maid of Gevaudan, Marie-Jeanne Valet related to the beast?

Show Answer
She was his sister

Q. After Scott, Allison and Stiles drowned what did Scott realize?

Show Answer
He was an Alpha

Q. What were the three words which let Liam stay human during his trip to Mexico?

Q. Name the real-life twins who played the one-time Alphas, Ethan and Aidan?

Q. Tyler Posey is best friend with whom in real life?

Q. In real life, Shelley Hennig is best friends with?

Q. Before he played Chris Agent, which werewolf hunter from Teen Wolf played a role in the famous television series The Secret Circle?

Q. Out of 2000 applicants which Teen Wolf character got a chance to play a role in “Road to Perdition”?

Q. Whose real-life dad played a role in Teen Wolf as a doctor?

Q. Whose older brother has cerebral palsy in real life?

Q. How many hours does it take to turn Scott McCall (Tyler Posey) into a werewolf?

Show Answer
Season one to three (1-3)

Q. Arden Cho who plays quite a hardcore role in the series is a lot more different in real life. What does she really do in real life?

Q. Two of the cast members are also band members though they are not in the same band. Who are they?

Q. Instead of Taylor Lautner, which Teen Wolf cast member was being cast in famous movie series Twilight?

Q. Which Teen Wolf characters are married in real life?