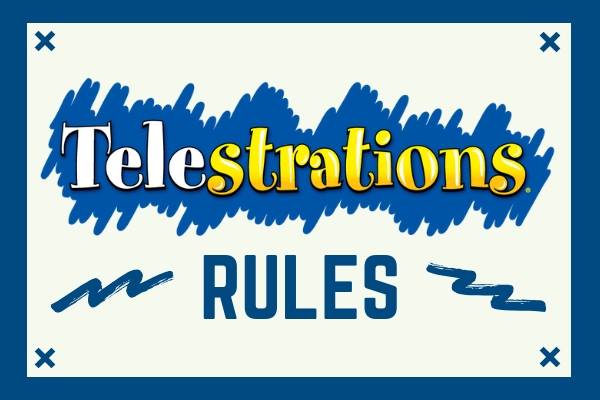 Have you ever tried playing Telestrations? If you are at a party and having difficulty passing your time, why don’t you think of playing a game with your friends and family members? Want to try something new? Go for Telestrations.

It is an ultimate party game and simply fun to play. Telestrations Rules are very simple. Everyone can understand them easily. Telestrations is produced by USAopoly. You can say that this game is a combination of Chinese whisper and Pictionary. Players are given on cards or piece of paper with the help of markers or pen.

They are then asked to make a list of words. Opponents then guess what is on the cards. At the end of the game, a player is chosen the winner as per Telestrations Rules. Adults and kids both can play this game but it becomes more interesting and fun adults play with the kids. Involvement of kids adds a funny element to the game.

Are you possessed by a Gamer’s soul? Do Check out: Video Game Trivia Questions & Answers

Telestrations is very much similar to “telephone” the game in which a player whispers a word or a phrase into the ear of the player sitting left to him, who would then whisper into next player’s ear and the chain continues till the game stops.

Just like in Chinese whisper, the person is supposed to announce the word loud that he has heard. It is then compared with the original word. Instead of this whispering thing, Telestrations is also based on drawing the word or phrase and then guessing this word.

To begin this game, you need to have 142 cards, 8 sketchbooks, 8 markers, a dice, a timer and don’t forget to keep a copy of Telestrations Rules and instructions. According to the Telestrations Rules, each player is handed a marker and drawing book.

A total of 12 players play this game. 8 players can also play the game. No matter what the number of players is, Telestrations Rules remain the same. This game is played in three rounds. Before initiating every round, every player is provided with a card that has a list of secret words. Each card with numbers between one and six.

This game alternates between guessing and drawing the words. One player rolls a dice which helps to determine which word will be drawn by each player on their respective sketchbooks. Flip sketchbooks are ideal to use because it helps to keep the guesses and drawings secret during the game.

Usually, every sketchbook has a different color spiral which helps to differentiate them easily. To make the game interesting and challenging at the same time, players are given one minute to draw their phrase or word, on the first page of their drawing book.

An old fashioned sand timer or a stopwatch can be used to record the time of one minute. It is in this given time, players have to describe the word or phrase assigned to them in the best possible way. There is a time limit in the game but that does not limit their creativity at all. They use their best skills to draw appropriate sketches.

Once the given time to the players is over, the players pass on their books to the players on their left side. Keep in mind that it is on page number two where players guess what was drawn by the other player on the first page of the book that was passed over to them.

When all the players are done writing their guesses, all of them turn their books to open page three of their books. Books are again passed on to the players sitting to the left side of each player. As per the Telestrations Rules, this process of drawing and guessing the words or phrases is continued until all the players get their original books back.

Now, each player is given a turn to reveal what was actually drawn and guessed in their books. On the basis of their performance, players are then awarded points. And at the end, a winner is chosen.

If you really want to make this game an entertaining one, involve kids in your game. Telestrations becomes more fun when kids are involved. They will definitely make funnier sketches as compared to the adults. Their guesses will be equally funny and entertaining as their sketches. This will definitely rose laughter in the room and it will make your party enjoyable.

Telestrations is a very engaging game that makes it interesting and does not allow the participants to get bored. Players are busy all the time in drawing and writing their guesses. Nobody has to sit and wait for their turn, the game is continuous the entire time.

Players only the take turn when the orders of guesses and drawings are revealed. At this time also, every player is involved in the game because everyone anxiously wants to know what actual word was and how it evolved. When it is announced, everyone is in laughing fits.

According to the Telestrations Rules, players award points to each other. Each player of the game awards a total of three points. One point is awarded to the player who drew their favorite picture or sketch in their book.

One point is given by the player to the one has made their favorite guess in their book. Now comes an interesting twist in the game, every player awards himself a point if the final guess in their book is similar to the secret one. At the end of three rounds, the player with the most points is chosen as the winner of the game.

Sometimes Telestrations is played in such a way that there is no winner of the game. Players on play the game to have fun. There is no focus on winning and losing the game. This is not the case all the time.

Players take it as healthy competition. In this scenario, points are awarded at the end of each round. In the end, the player who has the most points is chosen as the winner.

Learn more about Gaming rules of Bunco Rules: How to Play Bunco Game