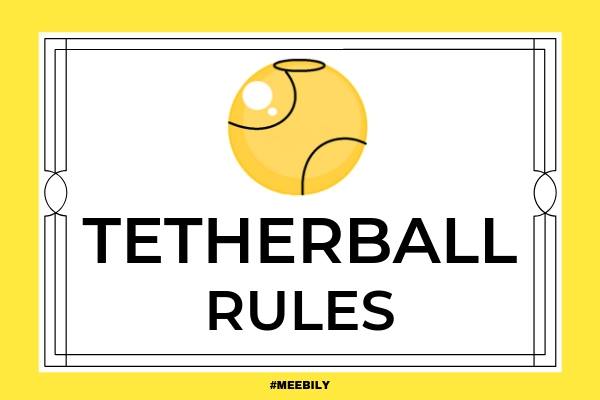 Tetherball is one kind of a sports game that is being played on home grounds, school grounds, and summer camps. The game is enjoyed by both kids and adults, with a little variation in tetherball rules, it is most loved and played by school going kids. The origin of the game was by Tethers who had live in the area of today’s Russia.

The game revolves around two players attempting to hit the ball in opposite tied to the pole via rope until one of them successfully wrap the rope around the pole that ultimately hinders the ball to move. There is a reason that the game is loved by kids and families.

The minimal equipment cost and not requiring a large space is one the few reasons, tetherball is enjoyed in not the only U.S but worldwide. Let’s dig in and find out how to play the game and what are the tetherball rules.

Already mentioned above, there’s not much involved in the equipment of tetherball. It consists of a vertical metal pole of ten feet but can be shorter if the age of kids playing the game is less than 10. The poly is firmly secured on the ground with cement so that it is not sturdy.

The ball hangs from the top of the pole through a tether or nylon rope. The length of the rope is long enough so that the ball is two feet from the ground in case It is not wrapped around the pole. The court of tetherball is approximately 10 to 12 feet radius divided into two equal parts. Each part belongs to each of the players. Flat and even surface within the circle is recommended to have the best play. The ball used in tetherball is much like a volleyball.

The Objective of the Tetherball

The simple aim of the tetherball is to hit the ball in one direction and simultaneously wrap it around the pole so that it does not move any further.

Game Play of the Tetherball

Though it depends on the players to decide who goes first, the game is strongly influenced by the fact that who goes first for the serve. The reality is, the player serving the first is an advantage which is why it is recommended to have multiple matches with alternately serve to be fair in deciding the winner.

Also, the receiver has always the opportunity to decide the direction in which they want to hit the ball. The server throws the ball in one direction while the opponent tries to capture the ball and hit it back. The server hits the ball hard enough so that it goes past the opponent and they do not touch it and rope winds around the pole, completely.

The back forth hitting continues until the ball goes up enough towards the ball that it stops spinning. The players can also decide if they want to use fists hits or one-handed hits. The nature of tetherball required constant movement and can be helpful to keep you fit & active.

Once the ball is hit by the server, the server is not allowed to hit the ball again until the opponent has touched it. The players are required to remain within their courts and shall not touch the pole or rope at any moment in the game. If any player goes offsides,

it is considered as foul and offending. Hence, the opponent gets a point. Once hit, the ball should bounce off immediately for the serve to be considered valid. Each player shall hit the ball only once per rotation. Exception in this rule is allowed only if the ball has hit the pole during the rotation.

If you are playing with ‘fist hits’ or ‘one-hand hits’ then either fists or hand shall be used for the hitting. Any other part of touching the body is also considered foul. However, there is another version of the game called ‘beach tetherball’ which allows the use of any part of the ball for hitting the ball.

During the course, if the violation occurs when the play is stopped and the wraps around pole are restored to the same number that was before the violation. Players are allowed to the touch rope only where it is tied to the ball. Using the rope to hit the ball in a way that it goes beyond the reach of the opponent is therefore not allowed. When the ball comes back to you, it shall be stroked immediately and returned to the opponent.

Holding the ball even for a nanosecond is not allowed because it can be redirected out of the reach of the opponent. Moreover, after striking the ball, the players are required to bounce off their hand right away or else it will be an illegal move. Likewise, all serves shall also be hit not carried away or thrown.

Whenever the ball crosses into your courtside, you are required to hit the ball only once and return it to the opponent. Hitting the ball more than once is called jugging and it is only allowed if it hits the pole or passes off the boundary line. Penalties should be awarded to the players each time a rule is violated and serve foes to the player who didn’t break the rule. Violating the rule for three times result in the immediate loss of the violator.

A point is awarded to each player on hitting the ball and wrapping the rope around the pole as far away as they could. You can also earn points if you are religiously following the rule while your opponent I s using illegal moves.

It is recommended to play at least 7 games and the winner shall win the tetherball by at least 2 games. These tetherball rules are set in order to negate the advantage of the receiver. However, since the tetherball is an informal game, players can make changes to this rule and decide the required number of winning games by themselves.