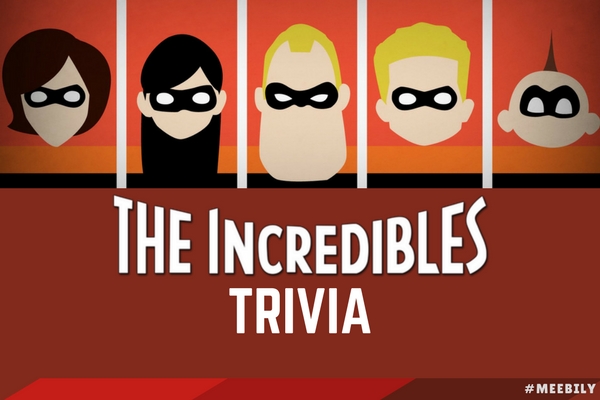 The Incredibles is an animated superhero adventurous and venturesome Walt Disney production which was written and directed by Brad Bird. The movie revolves around a superhero family who has to keep their superpowers a secret and life a silent peripheral life. Their powers were divulged when Mr. Incredible was seen helping the people with his superpowers which eventually drew the whole family into a scuffle with a bygone fan who then intrigues to annihilate all superheroes with his eradicator robot.

Who wouldn’t love a superhero animated movie with a mix of adventure, thrill, and an escapade? Well, almost everybody does which is why The Incredibles gained popularity just like wildfire in the forest. In no time everyone was seen complementing the plot, story, and animation of the movie. Have you been a fan of The Incredibles too? If yes, then her e’s a good news for you. We have especially designed an aggregated list of Incredibles Trivia Questions & Answers which is not only the best time pass but is also a test to judge how well you know about The Incredibles. So, ready for some fun? If the answer is yes, then buckle up and start with the most exciting Incredibles Trivia Quiz game ever.

Fun Facts about the Incredibles

Q. What dies Bob long for after he’s frustrated with his suburban life and white-collar job?

Q. Fifteen years after the relocation, Bob and Helen Parr lived as?

Q. Who is not aware of the vigilante work that Bob and his friend Lucius did, at times?

Q. After Bob loses his job he returns home and finds a letter from a lady Mirage, what was written in the letter?

Show Answer
She convinces her to be Mr. Incredible again.

Q. Edna decides to make the whole family in what?

Q. The homing beacon causes Bob to be?

Q. Dash and Violet use their powers to escape their captors, who join them later?

Q. Helen visits Edna, for what the main purpose?

Show Answer
To find out what Bob has been up to.

Q. In his civilian identity, under what industry does Bob Parr work?

Q. What was the name of the boy Violet Parr had a crush on at school?

Q. What was Dash’s middle name?

Q. How long have Mr. Incredible and his family lived in the house they currently occupy, at the beginning of the film?

Q. Out of three, how many of the Bob Parr kids had superpowers?

Q. What was the name of the person who followed Mr. Incredible pretending to be his sidekick?

Q. What was the name of the villain of the film?

Q. The villain Syndrome in the film was played by?

Q. What was the name of the main character Mr. Incredible when he was living a suburban life?

Q. What name did Elastigirl use when she was not out fighting crime and living a suburban life?

Q. Who played the role of Violet in the movie?

Q. What was the name of Bob and Helen’s hyper and over-excited teen son?

Q. Helen and Bob’s infant son was named after?

Q. What is the name of the French thief who bombed the bank at the beginning of the movie?

Q. What is the name of the white-haired lady who contacts Mr. Incredible after he is fired, and convinces him to get back into the crime-fighting business?

Q. What is the name that the main villain uses at the time that he kidnaps Mr. Incredible?

Q. What is the name of the final villain who challenges The Incredible family, at the very end of the movie?

Q. What is the name of the young babysitter who was left in charge of caring for the youngest member of The Incredible family?

Q. How does the main villain die?

Show Answer
His cape gets caught in a plane.

Q. What is the superhero name of Mr. Incredible’s friend who has powers to make ice in his path?

Q. Frozone is voiced by?

Q. Helen rescues Jack-Jack, and Bob does what?

Q. Which pun was the name of the villain from the beginning of the film?