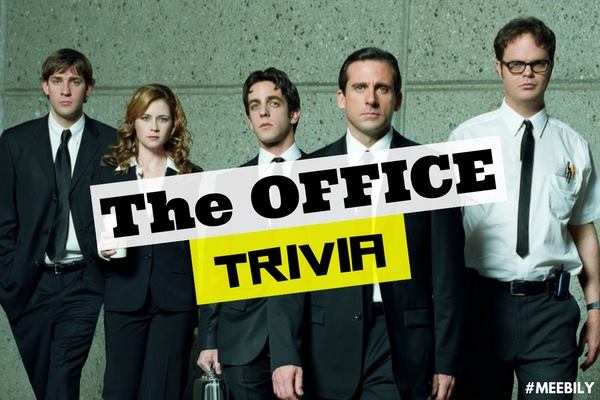 Are you looking to have a fun trivia game activity for your Office party? Look around and try to identify Michael Scott, Dwight, Pam or Jim at your workplace. Tag one of the best little taunting dialogues from The Office to your office colleagues that suits better to them.

Challenge your corporate friends (including your Boss!) to score highest on The Office Trivia Questions & Answers Quiz Game that has been enlisted below along with Office interesting Trivia Facts and let’s see who wins the bet. 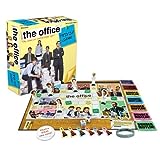 Want to know some interesting fun facts about the popular and almost everyone’s favourite sitcom named “The Office”? Head over to know the wackiest trivia facts about the American sitcom right below:

Every die heart fan of “The Office” remember two significant things about the series. The one is Pam’s and Jim’s wedding and the second is Holly and Michael’s relationship. Throughout the all 8 plus seasons of the entertaining “The Office” seasons, audience enjoyed a roller coaster ride of the numerous emotions making it more fun to watch.

Q. Which season 2 episode has R.E.M Song ‘Everybody Hurts’?

Q. Which singer made a song using The Office Intro Music as a music beat?

Q. Who was NBC first choice to play Michael?

Q. Who was interracial couple in real life?

Q. Who was originally auditioned for the role of Pam?

Q. Name the paper that appeared in opening credits of the show?

Q. Who was auditioned for the role of Jan?

Q. Which of the crew members of the cast known each other from the childhood?

Q. Which crew members attended high school together in Georgia?

Q. Who was actually the casting director of the show but played a role?

Q. Who thought that show wouldn’t be a success so he didn’t leave his part time job?

Q. Whose character named after a Baseball player?

Q. Who was actually supposed to leave the show in season nine?

Q. Who shot the opening credits of the show?

Q. Who was actually casted for the role of Jim?

Q. What were an Office spinoff?

Q. Did the computer at The Office actually had internet?

Many thanks to the hilarious and supertalented cast of the American sitcom “The Office” that made each and every episode so fun to watch for each one of us. Even their behind the scenes were equally amusing. Don’t believe us? Check out the most entertaining The Office’s characters trivia quiz below:

Q. Name the character which Jim dated in Season 3?

Q. To which thing, Stanley’s car was hit by in Season 3?

Q. Who was kissed by Pim after being intoxicated?

Q. Name the stripper that was hired by Bob Vance’s bachelor party?

Q. What is Erin’s first name?

Q. For whom Michael organized a funeral?

Q. What is Ryan’s surname?

Q. Who threw cake on Sandy’s face in season 6?

Q. How much discount did golden ticket offer?

Q. Who seduce Donna at her gym in episode 6?

Q. In Season 1 Episode 1, who started their first day at Dunder Mifflin?

Q. Of Whom Michael imitate?

Q. Name someone with whom Michael shares his birthday?

Q. Who replaced Michael in season 5?

Q. After calling off wedding with Roy, with whom Pam went on a date?

Q. According to Mike, what is the worst thing about prison?

Q. Name the company which Ryan set up?

Q. What was in the giant pot which Kevin drops all over?

Q. What was the username of Michael which he mentioned on Online Dating Site?

Q. For how long Jim and Pam been dating?

Q. What Michael was actually eating when Jim thought he was having ice-cream?

Q. What name did Dwight give to Justin Beiber?

Q. What was the name of Jan’s baby?

Q. What is Meredith last name?

Q. What is mentioned on Packer’s license plate?

Q. What is Roy’s last name?

Q. Name the movie that The office watched on movie Monday.

Q. At which branch, Karen became the regional manager?

Q. To whom Michael hook up with?

Q. From where Andy did graduation?

Q. What was Stanley favorite day?

Q. Who was able to win World Series of Poker?

Q. With whom Oscar has an affair?

Q. Where Pam and Jim got married?

Q. Who does Michael imitate in ‘Pilot’?

Q. In Season 1, who ends up dating Katy?

Q. How much money Michael donated to Oscar’s nephew?

Q. In Secret Santa game, what was the gift that Michael received?

Q. Who does Oscar crush on?

Q. Who ends with I-Pod in the ‘Yankee Swap?

Q. Along with papers, what does Sabre sell?

Q. Of which country Michael is afraid of being dominating the world?

Q. What was the gift that Pam gave to Erin?

Q. In the episode “The Incentive”, which animal was tattooed on Andy’s butt?

Q. In the episode “The Lotto”, can you guess the lottery amount won by the warehouse?

Q. In the episode “Doomsday”, name saying does Pam say at Shrute Farms?

Q. In the episode ” Last Day in Florida”, who got fired?

Q. In the episode ” After Hours”, who seduced Jim?

Q. What disease Michael was afraid of?