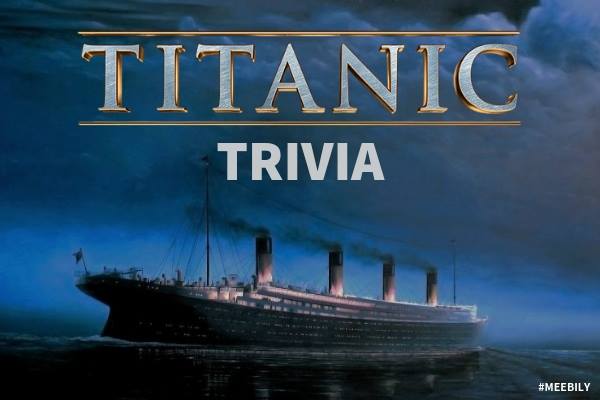 Looking back at the past, have you just realized that it’s been more than twenty years since Titanic hit the big screen capturing everybody’s hearts with Leonardo DiCaprio and Kate Winslet starring the movie.

Q. Name the person who promised Rose that she never let go?

Q. Can you name the female lead in Titanic?

Q. What was the color of Rose’s dress when she wanted to attempt suicide jumping off the boat?

Q. Name the person who shot Tommy and later killed himself.

Q. In the final moments, what were the musicians doing?

Q. According to old Rose, what Titanic was called?

Show Answer
The ship of dreams

Q. Name someone who has to enter at the time of the collision?

Q. Name Jack’s friend that came on Titanic with him.

Q. According to Jack, who does Rose resemble to?

Q. Name the song that Rose Sang while starring the sky.

Q. What was the necklace that Rose wore while getting her sketch?

Show Answer
The Heart of the Ocean

Q. From what region, Jack was from?

Q. Name the actresses that got nominated for an Academy Award for Titanic.

Q. Name the object under which Cal’s safe was found.

Q. To whom Cal tried to Bribe for a lifeboat?

Q. How does Rose plan to commit suicide?

Show Answer
Jumping of the ship

Q. Name the officer who let Jack and Fabrizio board on Titanic.

Q. Name the charcter who earned a nickname later.

Q. According to Rose, what was Titanic for her?

Q. Name the person who played character of Cal.

Q. Name the color of the key of handcuffs that were put on Jack.

Q. Name something that Cal gave to Rose.

Q. What was the age of the old Rose?

Q. Name the actor who was casted as Third Officer Pitman.

Q. Name the person who asked old Rose if she really wanted to go back to Titanic.

Q. How Mr. Murdoch died on the ship?

Q. State the count of the medals that Captain Smith has on his coat?

Q. What was the age of Jack when his parents died?

Q. What was Tommy’s sur name?

Q. What was the being Ruth wanted to marry Rose with Cal?

Q. To whom Rose made promise to never let go?

Q. Do all officers on ship has one stripe on the sleeve of their uniform?

Q. Who said that he is the king of the world in the movie Titanic?

Q. Who sang the title song of Titanic “My Heart Will Go On”?

Q. To which destination Titanic was headed?

Q. On which date, Titanic sank?

Q. Name the architect of the Titanic?

Q. From which place, Titanic left to a voyage?

Q. By whom Titanic was operated?

Q. State the count of Academy awards that Titanic won?

Q. What was the year when Titanic was released in US?

Q. Which room was not mentioned on the dock?

Q. Who said that Titanic was unsinkable?

Q. By which object, Titanic was hit?

Q. State the count of Oscars that Titanic received?

Q. Name the side ship that collected Titanic’s life boats.

Q. In which place, the safe was kept?

Show Answer
In the Wardrobe

Q. Name the year in which Titanic was hit by the iceberg.

Q. By whose perspective, majority of the movie storyline was told?

Q. How old was Rose supposed to be when she sailed on Titanic?

Q. According to Rose, state the count of people being rescued from Titanic?

Q. State the count of smoke stacks on Titanic.

Q. While loading the lifeboats, what order was followed by the captain?

Q. Name the last song the band played on Titanic.

Q. What was wrong with the cigrettes shown in the movie?

Q. Name something that was nevr spoken in the memory when Rose begins her journey back to Titanic.

Q. How does Tommy come to know that he was in first class during Titanic sinking?