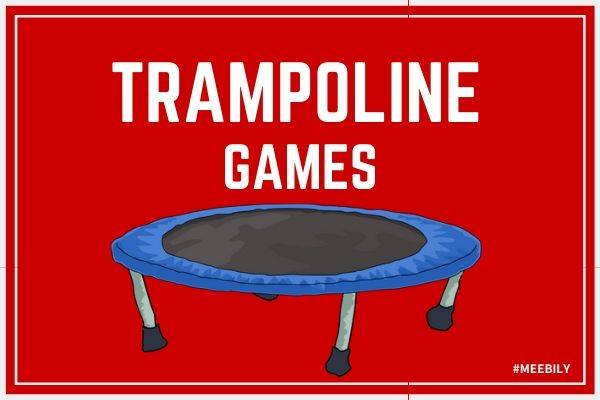 If there’s something that can turn your old backyard into something amazing and the go-to place for your kids, then that must be a trampoline. Trampoline games are specially designed for children and throughout the world, they are the favorite game for kids. The intriguing thing about the trampoline is that they last for several years and of some part wears out then no need to worry because the replacement parts are always available.

Exciting Games to Play on a Trampoline

Parents who are worried about the safety of kids while trampolining should know about the trampolines having nets around them.  The best part about having a trampoline is that you are not restricted to only one game, but you can play several games with your one trampoline.

We are mentioning 10 trampoline games that would be your favorite in no time.

Ring Around the Rossy

Topping the chart, with literally no trampoline rules, your kid can play this game for hours. The players form a circle holding each other hands and take turns deciding how they will fall down at the end; sit, knee drop, fall down or whatever you can come up with. While moving in a circle all of the chants:

Ring around the rosy,

Hasha, hasha, we all fall

And they fall down in accordance with the turns decided.

No, you don’t have to play with the eggs! One of the players had to be egg here and the rest of the players have this objective of cracking the egg. The egg sits in the middle of the trampoline with their knees pulled up to the chest, chin tucked down and arms wrapped around the knees.  The players jump around the egg until it cracks (the egg let go off their eggs). No player is allowed to touch the egg; hence they shall jump at least one foot away from the egg.

Just like in crack the egg, one of the players has to be the egg, in bouncing ball each player tries their luck as a bouncing ball. The bouncing ball stands in the middle of the trampoline, fall on their bottom and bounce. They have to bounce as many times in their bottom as they can. Once, they are no more bouncing, it’s the turn of another player to bounce and surpass the previous player. The player who ends up having the highest bouncing counts wins the game.

Remember the old school game, Chinses Whisper? Yes, where a word is whispered and passed on to so many players that it never comes out to be the same word when spoke loudly at the end of the game. The telephone is a modified version of that game. All players sit at the edge of the trampoline. One of them goes in the middle and do a trick (falls on bottom, spin, do a pike jump or whatever they want). The next person repeats their trick and adds one of the new tricks in their turn. The third person then repeats the first two tricks and add another one to it. The game continues until a player forgets the right sequence of the tricks. This player is then declared out. The game is repeated in the same way until all the players are out and only one is left on the trampoline edge. The likable fact about the phone is that it can be played with as few as two players and as many as 20 kids if you have a large trampoline.

This game is not widely known but it would fun to play for the kids of less than 5 age. You would need balls for this one. So, the game setup is simple. Put some of the balls in the middle and players will jump around the ball with the intention of avoiding the balls and not touching it. Balls will roll themselves and when a ball touches a player, that player is declared out. They must sit out for the rest of the game until only one is left untouched by the poison ball.

Gather around 4-5 people to play this game. One would be spraying others with the hose. The kids will enjoy the game in hot summer days and to be on a safe side play this trampoline game with the nets on the trampoline because the top gets slippery with water.

One of the players in this game is ‘it’. It has a softball and is blindfolded. Its job is to tag other players with the ball. In case they drop off the ball without tagging anyone else, then they must pick up the ball and set on tagging the journey again. The player who gets tagged, become the ‘it’ now.

Gather around 4-5 people and get a soft but large ball. Throw the ball up and scream out ‘Cherry Bomb’. Players can do anything to avoid being hit by the ball. But, no one can leave off the trampoline. If hit by the ball, you lose your 1 out of 5 lives. Swap the players for throwing the ball. The player who will leave alive wins the game.

Get 2-4 players and play the TRAMP. Have someone set the trampoline trick and others will copy it. If you fail to copy the trick you get ‘T’. Next time you will get ‘R’ and the game continued until you lose it to ‘TRAM’. Easy peasy but it’s going to be all fun.

Loved playing Ninja turtle video game? Now, is the time to play it yourself. One of the players is Ninja and everyone else is blindfolded. The ninja tries to knock everyone down while they try to protect themselves. For the safety of kids, punching, kicking and injuring others is not allowed. However, of ninja falls then the person knocking down the ninja gets to be the ninja next time.