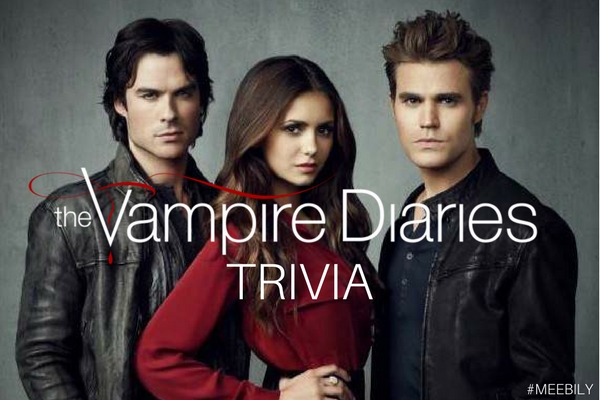 Are you ready to explore the Vampire Diaries’ fantasy world? A twisted story with supernatural characters and love triangles. The number of complications and plot twists in the show always has us hooked and wanting more. Plus, the gorgeous cast like Ian Somerhalder, Paul Wesley, and Nina Dobrev makes it even better.

Here is the ultimate Vampire Diaries Trivia to test your knowledge. Go ahead and play the intriguing Vampire Diaries Trivia Question and Answers quiz game and see if you can get them all right or you need to binge-watch the show again. Both the options are good enough, though. Track your quiz scores and challenge your friends and family to beat your score if they are that big fan of Vampire Diaries.

Q. What is the name of Joseph Morgan’s character?

Q. Who got Jenna out of the jail with one phone-call?

Q. Whose final moments were in paradise?

Q. Matt’s ex is a vampire, his mom is immature, & what is his sister?

Q. John’s wife was Isobel Flemming, together they had__?

Q. Anna only wanted to open the tomb because of who?

Q. Who was a dirty blonde who had her heart ripped out by Klaus?

Q. In the season 3 finale, who was the one to stab Klaus in the chest?

Q. Which of the two died first, Greta, or Jonas?

Show Answer
It was Greta.

Q. Who plays the role of Matt Donovan in the show?

Q. Who was Damon’s girlfriend?

Q. When is Elena’s birthday?

Q. When were Damon and Stefan turned into vampires?

Show Answer
“The Night of the Comet”.

Q. When was Katherine turned into a vampire?

Q. When is Caroline’s Birthday?

Q. What was the name of Candice Accola’s character?

Q. Sara Cannig appears in the show as who?

Q. Who was Stefan’s girlfriend?

Q. Who was the captain of the cheer leading squad?

Q. Emily protected Katherine for Damon, what did Damon do for Emily?

Show Answer
He saved her family.

Q. Who did Klaus kill before he drowned Carol Lockwood?

Q. Who was the first ‘Martin’ to die on the show?

Q. Who was repeatedly stabbed by Stefan the Ripper?

Q. Shane was killed on the island, who pretended to be him?

Q. Mason and Isobel were both great friends with which ignorant vampire?

Q. Who did Damon try to kill in the hospital in season 4?

Q. Bonnie’s mother had another child, what was their name?

Q. Who disguised himself as pizza delivery guy?

Show Answer
Noah disguised himself as the pizza delivery guy.

Q. Harper was a friendly vampire who got turned by who?

Q. Who was the lady wolf who slept with Klaus in season 4?

Q. In the season 1 finale, Damon found someone unexpected. Who was it?

Show Answer
It was Richard.

Q. Damon is good in the sac. Who thinks that?

Q. In season 4, who was Elena was tempted to eat at the funeral.

Q. The oldest son of the Mikaelson’s was in love with who?

Q. Mikael is a vampire who is known for what notorious activity?

Q. In Season 2, why does Stefan join Klaus?

Q. In the third season, how does Matt connect to Vicki’s ghost?

Q. Why does Tyler finally tell his mother he’s a werewolf?

Show Answer
To convince her to free Caroline.

Q. In Season 2, why is Klaus tracking Elena?

Show Answer
He want to use her blood to create more hybrids.

Q. When were Klaus and Stefan friends?

Q. Why did Elena slap Damon for the first time?

Show Answer
He tried to kiss her.

Q. Bonnie didn’t want to talk to Stefan in season 1 for a while. Why?

Show Answer
Because he didn’t finish his transition.

Q. In the 70’s, Damon slept with Lexi on the table, stage, & what was the third thing/place?

Q. Why didn’t Rebekah kill Esther when she returned in season 3?

Show Answer
Because she was dying.

Q. What happens to Abby after Bonnie finds her?

Show Answer
Turned into a vampire.

Q. Trevor helped find the doppelganger, but why did Elijah kill him?

Q. What caused Alaric to go crazy in season 3?

Show Answer
His ring is to blame.

Q. Logan use to babysit Caroline, but why would he harm her?

Show Answer
To threaten her mother.

Q. When did Damon party in New York City with Lexi?

Q. Where is the series set?

Show Answer
The series is set in the fictional town of Mystic Falls, Virginia.

Q. When was the cemetery established?

Q. What episode was Damon and Elena’s first kiss?

Q. What episode did Kai and Luke merge?

Show Answer
“Prayer for the dying”.

Q. What song was playing at the ‘Miss Mystic Falls’ pageant?

Show Answer
All I need.

Q. What prison world were Damon and Bonnie stuck in?

Q. What song was playing at the motel in Denver when Damon and Elena kissed?

Q. What episode did Elena burn her house down?

Show Answer
“Stand By Me”.