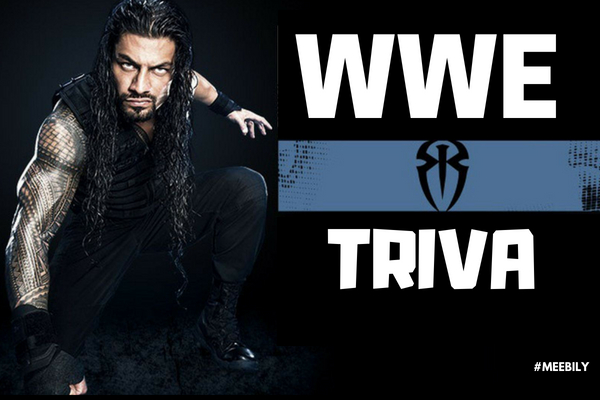 Hosting 300 events per year and broadcasting all over the world, World Wrestling Entertainment has been the top promoter of wrestler since the beginning of time. It started off as Capitol Wrestling Corporation and today stands as the champion of wrestling’s promotion. With shows like WWE Raw fans and followers are given drama, action and feuds.

Here are some challenging WWE trivia questions and answers to see how big of a fan you really are.

Q. Who is the only WWE Superstar who has captured the Intercontinental Championship 8 times?

Q. Which 2 WWE Superstars today/in the past both attended WrestleMania VI in the Toronto Skydome?

Q. In WrestleMania 2000, which McMahon was on the side of the Big Show in a Fatal Four Way Match for the WWE Championship?

Q. What are Rey Mysterio’s finishers?

Q. What is The Great Khali’s finisher?

Q. Who was the Raw GM before AJ Lee?

Q. What is The Rock’s finisher?

Q. In what year did Mr.Kennedy debut on WWE?

Q. What year did R-Truth debut on smackdown and against who?

Q. In what month and year did the new Ted Dibiase debut on Raw?

Q. In 2007 who did the hardy boys eliminate last to win the World Tag Team Championship in a ten team battle royal?

Q. In April 2008 Triple H pinned Randy Orton to become new WWE Champion in a fatal-four way match, who were the other two superstars in that match?

Q. What is Umaga’s finisher called?

Q. How much does Hornswoggle weigh about?

Q. Who won the first money and the bank?

Q. What does MVP say when he does his finisher?

Q. True or false? Randy Savage has won the Intercontinental Championship the most times in WWE history.

Q. Who has won the most Royal Rumble’s and how many?

Q. Who did Andre the Giant beat in a Bodyslam Challenge?

Q. Who are the members of the Basham Brothers?

Q. At No Mercy 2007 Batista beat who for the World Heavyweight Championship in a Punjabi Prison match?

Q. How tall is Hornswoggle in foot?

Q. Who is the longest reigning divas champion?

Q. Who is the twin of Nikki Bella?

Q. Which wrestling diva is married to the Miz?

Q. Who is married to jimmy Uso?

Q. Who is the wife of Rusey?

Q. Who is Ric Flairs daughter?

Q. Whose catchphrase is “this is my house”?

Q. Who is the First Smackdown Women’s Champion?

Q. Her dad is Ricky the steamboat?

Q. What is the name of John Cena’s fiancé?

Q. Name the diva who has the same last name as her first name.

Q. Name this red headed diva who is famous for faking injuries to get out of a match.

Q. What is Emmalina’s real name?

Q. Who was the mentee of Charlotte and is now dating Dolph Ziggler?

Q. Who was the overall first draft pick in the WWE?

Q. Who was the first WWE Superstar to capture the ”Money in the Bank” contract 2 WrestleManias in a row?

Q. True or false: Triple H’s song starts off with ”time to play the game”?

Q. How long has Shawn Michaels had his song Sexy Boy?

Q. How many WrestleManias were held in the city of Houston?

Q. In one of Monday Night RAW’s greatest moments, what did former RAW GM Eric Bischoff promised Chris Jericho and John Cena in their match for the WWE Championship later that night?

Show Answer
The loser will be fired.

Q. When Tommy Dreamer was ECW champion, how long did his reign last?

Show Answer
Less than an hour

Q. How many episodes of SmackDown had been so far?

Q. Who are the Headbangers members are?

Q. In which year did Crash Holly debut on Raw?

Q. Have all the songs in John Cenas career been rap songs, true or false?

Q. What was the name of the tag team of The Rock and Mankind called?

Q. What does the tag team FBI stand for?

Q. At Judgement Day 2008 Triple H and Randy Orton battled it out in a?