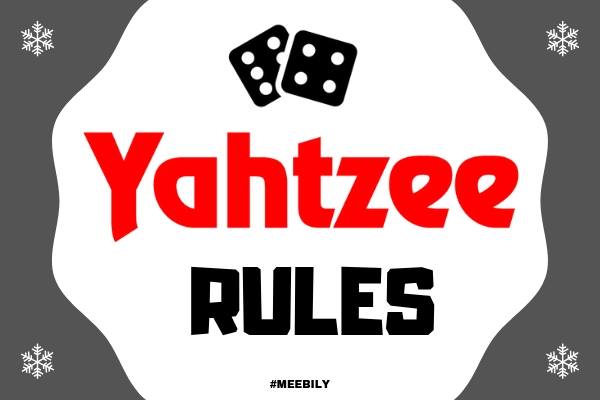 Yahtzee, a classical dice game is played with 5 dices with a goal to score as many points as one can. According to Yahtzee rules, all five dices are rolled together to get combinations from the 13 categories (explained below) to gain points and win the game. The Yahtzee rules are quite straight-forward requiring the players to be vigilant and active throughout the game if they want to have the triumph. The score of each combination is pre-determined, players are only required to note down the score of each category in the box mentioned on the Yahtzee score sheet.

Equipment and Layout of Yahtzee

The Yahtzee game might sound complicated when it comes to the components required. It consists of 5 dice, 80 Yahtzee scorecard, and Yahtzee shaker. Some games also include the use of Yahtzee bonus chips. Another fascinating aspect of the Yahtzee rules is that the game can be played solitarily as well as with multiple players, up to 6 in teams of two.

Deciding the first turn is something to look forward to in every game. Yahtzee’s rule is interesting in this regard. Both teams roll all 5 dice and their score is added up. The team with higher score gets the first turn.  The game is played till 13 rounds where players can roll the dice three times in each turn. Players can roll the dice thrice if they think they can improve the core of initial rolls. However, if they are satisfied, they can note the dice score and turn will be rotated clockwise.

These are the expected combinations you are going to get when you roll the dice. The scores of each combination are discussed under the section ‘scoring rules’.

There are two sections to record the score on the score sheet, the Upper Section and the Lower section. It is up to the players on how they want to write down the scores of each turn. Make sure, you fill the box wisely because you can’t change your score once filled

As mentioned before, it is one of the integral parts of Yahtzee rules that players get to roll the dice three in each round, according to their own will. In each turn, you will have three chances to roll the dice and obtain the combination of the best scores.

For example, in one of the turns, you rolled a 3, three 4s and a 5, you might want to keep 4s and roll 3 and 5 to obtain a better combination.  In the second roll, if you get a 4 and 5 then you shall keep the 4 but roll the 5 again in hopes of getting a 4 again and thus scoring 20 (and Yahtzee of course- 50 points).  But, if you get 5 in the third roll, then you would write 16 under 4s or you can also add up the face values to go with the score of ‘four of a kind combinations.

Remember that Yahtzee is the game of wisdom and strategy. With Yahtzee getting you the highest score, try to get it as many times as possible. An additional bonus with Yahtzee’s combination is that you will score 100 points with Yahtzee after you have obtained your first Yahtzee. Hence, try to get this early in the game.

Without any delay, it is important to let you guys know about the score of each combination which would help you understand Yahtzee easily.

A bonus of 35 points is awarded on scoring 63 or higher points in the upper section. Sometimes, it is confusing to decide where to score each round. It is advisable to keep in mind the 35-point bonus. It is your advantage if you score the high number of 2s and 3s in the upper section of the sheet. For example, you have rolled four 2s with a 5 and 6. Now you can record the score as 6 under the 6 box or record it as 8 under the two boxes. You should record it as 8 because the combination of 6 would get you 35 or higher points (if you roll five 6s incoming turns). Always, aim for straights early in the game to avoid writing 0 in your lower section which has the potential of higher scores. When the game is about to end, and you didn’t score a Yahtzee yet, it is recommended to score Yahtzee in the upper section, in case you get it now. This will ensure you to score the 65 points on the combination of five 6s while the Yahtzee will get you only 50 points here.

Quite evident, the player with the highest grand total at the end of 13 games, wins Yahtzee.

1 thought on “Yahtzee Rules: How to Play Yahtzee Game”