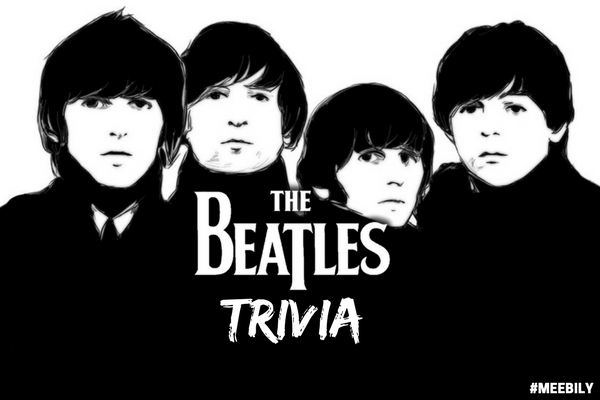 Celebrate your musical themed party with ‘Beatles’ the Liverpool’s peerless band with notorious popularity amongst the music lovers. If you want to have a throwback to a late old golden era of the pop music industry then nothing would be better than The Beatles themed songs parties accompanied by exciting The Beatles Trivia Questions & Answers quiz.

Ace the trivia quiz by scoring highest and claim to be the ‘beatlemaniac’. The compilation comprises of questions with different difficulty levels, giving the trivia game an intriguing kick to make the battle of ‘Beatles mania’ even more interesting. Play the trivia game along educating yourself with our Beatles trivia facts that you never knew.

Interesting Trivia Facts about the Beatles

The Complete Beatles Songs: The Stories Behind...
Check Price

Q. Name all the members of The Beatles.

Q. Which of the Beatle’s member has Blue eyes?

Q. Which two members of the Beatles band collaborated with Frank Zappa?

Q. In which The Beatles grew up?

Q. What was the first album The Beatles released?

Q. “Rubber Soul” was released in which year?

Q. What type of music The Beatles mostly played?

Q. Who played Tabla on “Love You to”?

Show Answer
In Spite of All the Danger

Q. Who played drum in “Please Please Me”?

Q. Where The Beatle’ drummer Pete Best was born?

Q. The first auditions of The Beetles were arranged by whom?

Q. Name the Beatle that was the last one to join the group?

Q. Name the first drummer who played before Ringo?

Q. In which year did The Beatles officially disband?

Q. Who played piano on “Get Back” from “Let it Be” album?

Q. When The Beatles first appeared on “Ed Sullivan” show?

Q. Name the single that was released on Apple Label?

Q. When The Beatle receive their MBE’s?

Q. What was the date John Lennon was born?

Q. Name Asia’s three places in which the Beatles held their concert?

Q. What was the name of first album released in America?

Q. What was the occupation of John Lennon’s father?

Q. How many members of The Beatles were there?

Q. What were the names of John’s two sons?

Show Answer
I want to hold your hand

Q. Who was John Lennon’s inspiration to buy first Rickenbacker?

Q. When the album named “Rubber Soul” was released?

Show Answer
For possession of drugs

Show Answer
All My Loving

Q. Which Beatle was first to star by himself in a film without other Beatles?

Q. To whom John Lennon was married when the British invasion hit America?

Q. Who was the one who played guitar on “Taxman”?

Q. Who played lead guitar in “While My Guitar Gently Weeps”?

Q. What was Ringo real name?

Q. Who sang lead in “If You’ve Got Trouble”?

Q. Name The Beetles album that was released in 1966?

Q. In which show The Beatles made their first U.S TV appearance?

Q. Name the member of Applesauce who is dead?

Q. Name the first song The Beetles performed during their appearance in “Ed Sullivan Show”?

Show Answer
All My Loving

Q. Which Beatle member appeared as guest on “Monday Night Foot” in 1970?

Q. Name the first manager of The Beatles.

Q. Which Beatle member was kicked out of German Club for being too young?

Q. Which car Ringo had when he was hired by the band?

Q. Who played drums on album version of “Love Me Do”?

Q. Name the person who sponsored first professional tour of The Beatles.

Q. What was the name of John Lennon’s first book?

Show Answer
In His Own Write

Q. What was the age of John Lennon when he died?

Show Answer
This Bird has flown

Q. Which Beatle was first to get married?

Q. Which member of the Beatles was the last to sign dissolution papers?

Q. When Ringo Starr got married?

Q. What song was initially titled as “Maharishi”?

Q. Name the song that was banned in Australia for being too violent.

Show Answer
Run For Your Life

Q. What was the place at which Rocky Raccoon lived?

Show Answer
Somewhere in the Black Mountain Hills of Dakota